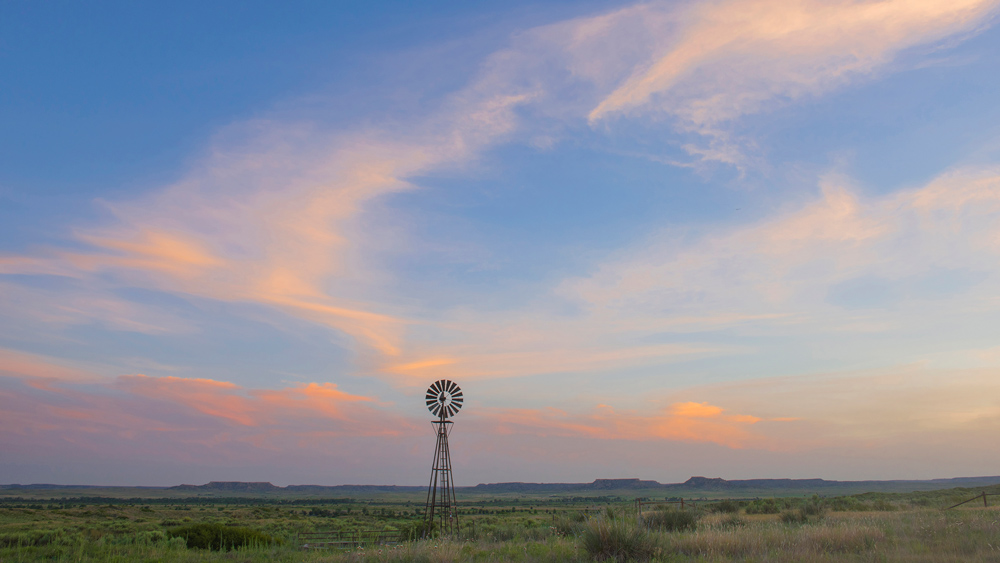 While cities have a certain charm, it’s hard to beat the freeing feeling of being completely surrounded by nature. From a property with a working cattle ranch in Hawaii to a ski-in/ski-out ranch in Colorado, these listings are ideal for those dreaming about trading the big city for the great outdoors.

Business magnate T. Boone Pickens is selling his beloved 64,809-acre Mesa Vista Ranch for $250 million. Located in the Eastern Texas Panhandle around 85 miles from Amarillo, the ranch encompasses 101 square miles of rivers, rolling hills, mesas, and man-made lakes. After purchasing around 2,900 acres of land along the south side of the Canadian River in Roberts County in 1971, Pickens set about turning the wilderness into an oasis.

The ranch—which had only a small metal livestock feed house when Pickens first bought it—now boasts a two-story pub, a nine-hole golf course, a dog kennel, a chapel, an art gallery, and a private airport. The 33,000-square-foot main lodge includes a great room with two fireplaces, a library with a spiral staircase, a wine cellar, a commercial kitchen, and a 30-seat movie theater. There’s also a lake house, a gate house, and a 6,000-square-foot family house perfect for guests.

Though Pickens has long been passionate about the property, he believes it’s time to find a new owner who will love the land just as much as he does. “The Mesa Vista has been a labor of love that has occupied the better part of my life,” he continued, “and I intend for a lot more good to come from the sale of the ranch.”

Pickens, who has donated more than $1 billion to charities throughout his lifetime, plans to donate much of the proceeds to the T. Boone Pickens Foundation, which funds numerous philanthropic commitments. The ranch is being offered jointly by Hall and Hall and Chas. S. Middleton and Son.

Located adjacent to West Buttermilk Ski Area on 61 pristine acres, 2900 West Buttermilk Road is a never-before-offered ski-in/ski-out ranch that gives residents a front-row seat to the snowy weather and spectacular ski runs. Surrounded by mountains, the home offers stunning views during every season—from the verdant greenery that comes to life during the spring and summer to the golden Aspen trees that burst forth in autumn to the snow-dusted slopes that create a postcard-perfect setting every winter.

Built into the side of a hill, the 15,664-square-foot main home offers seven bedrooms, seven full baths, and three half baths. Vaulted ceilings, rich woods, and multiple fireplaces converge to create a majestic mountain manse. From a chef’s kitchen with double ovens to a personal theater and a billiards room, the home was made for entertaining. Outdoors, a covered and heated dining area with a fireplace and barbecue create a resort-like space, and a sunken hot tub overlooks the mountains beyond.

The property also includes a 2,000-square-foot caretaker’s home equipped with three bedrooms and three full baths, plus a 7,500-square-foot barn with a heated vehicle maintenance center. The ranch is currently listed for $50 million through Sotheby’s International Realty.

Molokai Ranch, an approximately 55,575-acre expanse that occupies around 35 percent of the island of Molokai, can be yours for $260 million. The enormous property includes more than 20 miles of coastline, sandy white beaches, tropical rainforests, sea cliffs, nature preserves, and pastureland. Currently equipped with a hotel, a 1,200-acre working cattle ranch, and two golf courses, the island expanse has something for everyone.

Facebook CEO Mark Zuckerberg reportedly considered buying the property in 2014 before ultimately deciding to purchase land in Kauai. Past development efforts on Molokai have run into roadblocks because of local determination to protect the land from overdevelopment. According to Scott Carvill of Carvill Sotheby’s International Realty, who currently holds the listing, the property is ideal for a legacy buyer.