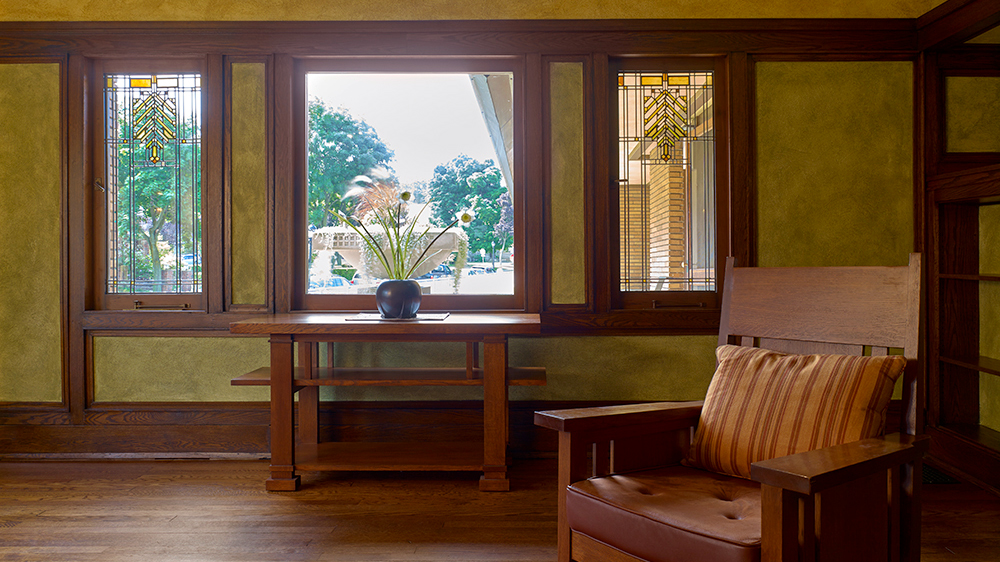 Homes designed by the late American architect Frank Lloyd Wright continue to be a big draw for architecture aficionados across America. Several of his designs, including a circular home designed for his son and daughter-in-law in Phoenix and a temple-like house in Los Angeles, are currently on the market. But if you want to see his architectural prowess in person before deciding whether to buy one of his homes, head to the George and Delta Barton House in Buffalo, New York. Built in 1903, the house is a prime example of Wright’s early Prairie style—and it helped propel him to recognition on the national level.

The residence was one of six interconnected buildings erected in a complex known as the Darwin D. Martin House. Three of the properties have since been demolished, but—thankfully for architecture lovers everywhere—the Martin House Restoration Corporation raised funds to oversee the restoration of the remaining structures. Fresh off a $2 million restoration, the Barton House retains its status as one of Wright’s best preserved Prairie-style homes.

Wright envisioned the home as an upgraded spin on his Joseph J. Walser House in Chicago (1903), and he added modern touches such as a tile roof, brick veneer, and expanded verandah. The restoration job was kicked off last September, based on plans created by HHL Architects. The team oversaw mechanical upgrades (HVAC, security, and electricity systems) and restored the stucco eaves, chimney, masonry, and original plaster.

They also refinished the interior woodwork and built-in cabinets, restored the verandah floor, and repaired the original light fixtures. Impressively, the house still retains all of the original windows, which were kept to maintain the integrity and feel of the home. “The restoration of the Barton House not only invites visitors to enjoy and understand its significance as an icon of Wright’s Prairie style but also provides a window into the role of patronage in architecture,” says Mary Roberts, the executive director of Martin House.

Visitors can see the restored residence for themselves by booking a tour at Martin House.