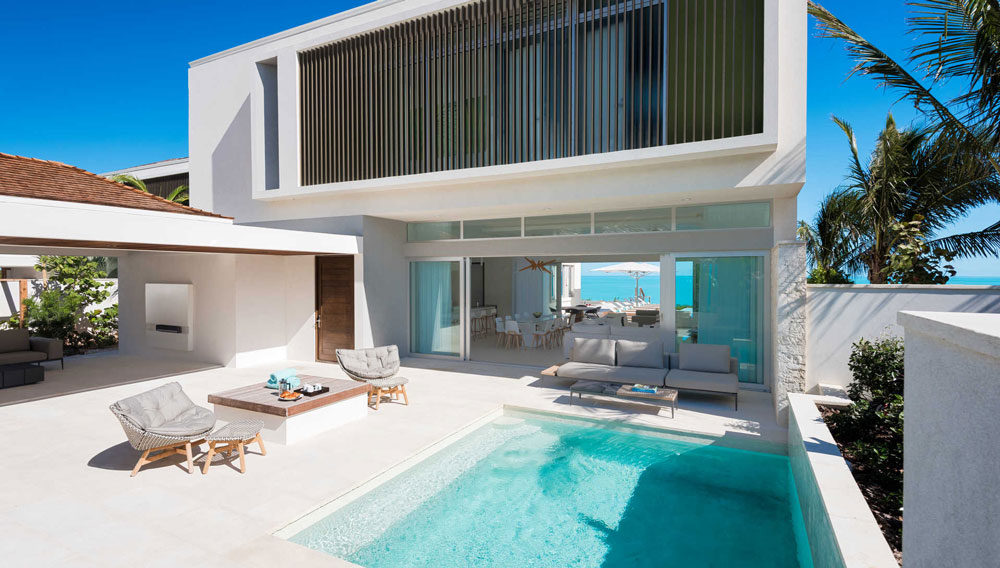 As a traveling writer who reports on the ins and outs of the luxury real estate market, I notice the minute details—a speck of color here, a muted tone there; technology versus tradition—all the way down to the specific finish in the bathroom. Yet sometimes the details leave more questions than answers.

The highest-end new developments across the country all seem to be taking cues from one another. “Everybody is following a trend,” says 121 Marina developer Eric Soulavy, the man behind the first new development in 20 years inside Key Largo’s Ocean Reef Club. This trend goes a little something like this: marble countertops, one of three high-end appliance brands, sleek cabinetry flush against the walls, floor-to-ceiling walls of glass, and black-and-white variations all wrapped into a decidedly modern layout. I noticed this design trend from south Florida to Los Angeles to Turks and Caicos, and I instantly became curious about it. Are developers and designers all drawing from the same design pool—and if so, why? Most importantly, is this what buyers really want?

“The market is now full of discerning and knowledgeable buyers,” says New York City broker Michael Lorber of Douglas Elliman Real Estate. “Everything is already done for them, and they want to simply move in.” He believes developers are focusing on similar layouts and designs to create homes that are attractive to the highest possible number of potential clients. “[Clients want] that super high-end look,” he says, “so it looks like you hired Peter Marino to finish it.”

Down in Turks and Caicos, new residences are following a similar aesthetic—but the design is more of a response to the natural surroundings. “We responded to the large-cut rock walls on the site and created formal versions of these with large feature panels of natural stone,” says Chris Davies of Coast Architects (who designed the Gansevoort Villas).

The villas, which are built into the Caribbean hillside, show off modern details like lighter shades and sharp angles. It’s a reflection of the relaxed atmosphere in the quiet island nation but nevertheless feels like something you’d see in a busier market—right down to the choice of appliances. “We selected Sub-Zero and Wolf appliances as the realtors felt these brands suited the luxury standards that our buyers would expect,” developer Bruce MacLaren says. “Kohler was selected for all our fixtures as we like the modern style and have had good results at the [Gansevoort Hotel] with their products.”

I saw echoes of this styling at the launch party for the $38.5 million 642 Perugia Way in Bel Air. Similar smooth lines, dramatic marble, and name-brand furnishings were present throughout. (Perhaps one of the key differences was that instead of the sea as your backdrop, a golf course and other mansions lay in the expanse.) “We were intent on having the overall feel of the home be light and airy,” says Mary Ta, founder and owner of Minotti Los Angeles and MASS Beverly. She was the lead designer for the new construction residence.

“Light and airy” certainly broadly describes what many of these layouts are evoking. In the modern era of the open floor plan, these designs are minimally invasive, allowing for as much real living space as possible.

In South Florida, that’s highly apparent at Jade Signature in Sunny Isles Beach, which is a driving example of the current trends domestic and international buyers are looking for. “It’s a question of how people like to live,” says developer Edgardo Defortuna. He adds that the layouts are a combination of functionality and usability and “if it’s just nice-looking, it doesn’t work.”

He travels to the world’s largest design fair, Salone del Mobile, every year to stay up-to-date on the top products from leading companies and then incorporates them into the design. “For example, in the case of Jade Signature, we selected Gaggenau for the kitchen appliances and THG bathroom fixtures, which, in both cases, are the same brands we have in our home. THG is a French company that also designs bathroom fixtures for Lalique and Baccarat. The owners, who are in Paris, are a pleasure to do business with because they really understand our philosophy, and the quality of their product is, without a doubt, the best in the market.”

Jade’s array of on-site amenities (including a spa and kid’s room) was built with the family in mind. With four-bedroom units starting at around $4 million, the design is geared toward a buyer who has seen it all and is looking for just enough flair alongside the creature comforts they expect.

Overall, the modern design trend is both a response to what buyers currently expect (open layouts, understated colors, high-end appliances and furnishings) and a prediction of what developers believe they will want in years to come (since projects are often built years before potential buyers will ever step foot inside). The current trend is a low-maintenance, easy-to-replicate design that lends itself to customization, and that’s good for developers and buyers alike. Developers can plan and build at pace, and buyers can find solace in knowing what they’re walking into.