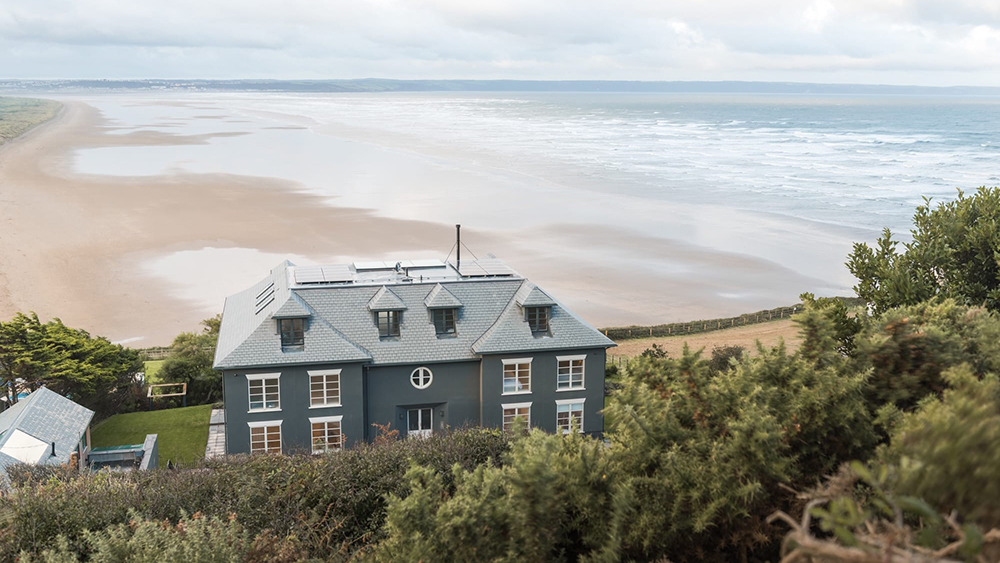 It’s one of the most extraordinary album covers you’ll ever see: row upon row of hospital beds, stretching off along the sands towards the sea. On one of the beds sits a man; a few rows away stands a uniformed nurse, bedsheets in hand. The beds—700 of them, real wrought-iron hospital beds, in the days before CGI—had to be carted out onto the sands and assembled. Then disassembled because of rain and carted back two weeks later when the weather improved. The album in question is A Momentary Lapse of Reason, and Storm Thorgerson’s image is as mysterious and impenetrable as Pink Floyd fans had come to expect by 1987.

It’s also incongruous. The man looks forlorn, at a loss, in this place of extraordinary natural beauty. Heavenly beauty, you might even say. For this beach—Saunton Sands in north Devon—has its celestial connections too. It appeared as something very much like paradise in the British movie classic A Matter of Life and Death, in which David Niven’s RAF pilot crashes his plane but dodges the afterlife, and in Robbie Williams’ video for Angels, in which he rides a motorbike along the vast expanse of sand. And it’s those breath-taking beaches you’ll see as you gaze from the windows of Chalet Saunton, overlooking the north Devon coastline: a heavenly sight indeed.

There’s always something exciting about arriving after dark in a place you’ve never been before, and having to wait until morning to take in the scenery. And waking up in Chalet Saunton, the area’s newest and most luxurious self-catering option, does not disappoint. From the cliffs above the sands, visitors can feast their eyes on this Area of Outstanding Natural Beauty; the largest sand dune system in England, also home to the 55-square-mile Unesco Biosphere Reserve Braunton Burrows, two of the finest golf courses in the UK, and some of the most diverse coral reefs in the country. Chalet Saunton grants you direct access to those three miles of honey-colored sands. Surfers and dog-walkers rejoice: Saunton Sands is the only year-round dog-friendly beach in north Devon.

Standing on a redeveloped site that has been owned by the same family since 1946, the pet-friendly, purpose-built, exclusive apartment hotel, surrounded by landscaped, lavender filled grounds and set over four floors, contains six three-bedroom luxury holiday apartments and a gorgeous two-bedroom top-floor penthouse with private balcony. Rooms are huge—airy and beautiful with floor-to-ceiling picture windows offering front row seats to the biosphere’s changing light show.

We stayed in Apartment one, where the best coastal views can be had. It has two double bedrooms, a twin room and two bathrooms—masses of space for six people. All the apartments have been decked out to the highest standard, with an Art Deco/mid-century/minimalist mix that just works. Furniture is scandi-luxe and relaxed, Slim Aarons photos line the walls and Ila products pamper the senses. On your first morning, you’re greeted with a breakfast hamper of local produce and Lisa, the wonderful housekeeper/concierge, can reserve anything from yoga classes and surf school lessons to a restaurant in neighboring villages, Braunton and Croyde.

However, the beauty of Chalet Saunton is that you actually don’t want to venture too far at all—you don’t need to: at the bottom of the steps is the Beachside Grill offering up delicious local produce from breakfast to dinner. Eat well, sleep well and let the sands work their hypnotic powers: pause, relax and breathe in the sea air. You’ll be glad you did.

Apartments start at £400 ($495) per night for a three-bedroom apartment on a self-catering basis.

Check out more photos of the Chalet Saunton below: