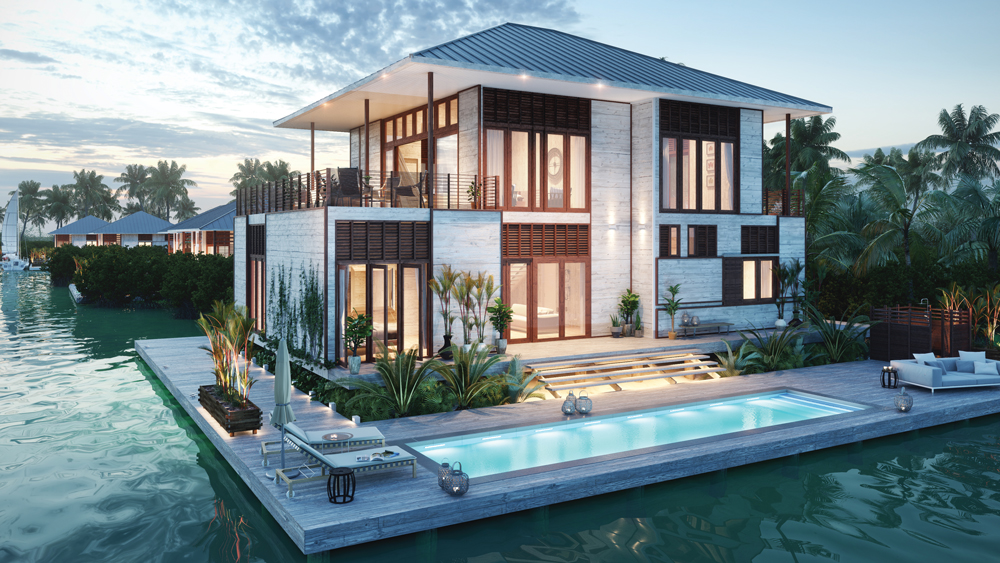 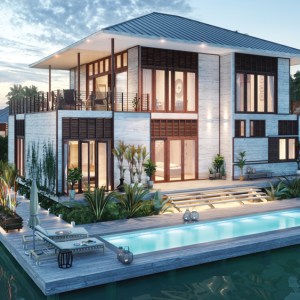 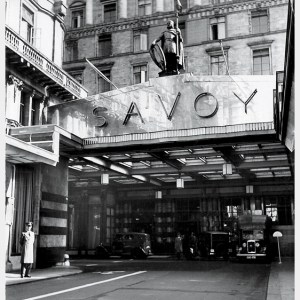 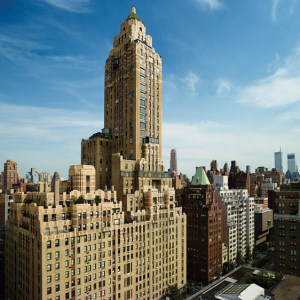 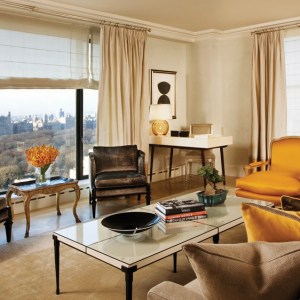 When the Savoy Hotel opened in London in 1889, it was considered the height of luxury. The 200-room building featured electricity throughout, large lifts that transported guests to all floors, and a whopping 67 plumbed bathrooms—an extravagant number at the time; the other 200-room hotel in London had only four plumbed bath­rooms. At the turn of the next century, the landmark property debuted another game changer with the Savoy Apartments, a collection of one- to three-bedroom suites with sitting rooms and bathrooms that were the first serviced apartments in London. Notable residents included actor Lillie Langtry and Thomas Dewar, who became one of the Savoy’s longest-residing inhabitants after living there for nearly 30 years.

Across the pond, the trend of living in hotel residences took off in New York City in the 1920s and ’30s. The Carlyle, now a Rosewood Hotel, was an Upper East Side fixture that opened in 1930, offering residences first for rent and later for purchase when it turned cooperative in 1971. Soon, living in hotels came to be a sign of high society in North America and Europe, with Oscar Wilde, Coco Chanel, Howard Hughes, and a host of other famous figures becoming long-term hotel residents.

Toward the end of the 20th century, private residences within destination resorts came into vogue. Four Seasons unveiled its first resort with private residences in 1996 in Nevis. The experiment proved popular with patrons, and the brand is banking on that continuing; 80 percent of upcoming Four Seasons projects will have a residential component. The Ritz-Carlton debuted its first resort with residences in Miami in 2001, and boutique brands are also beginning to explore the resort-residence concept.

“The mass trend [of buying in resort communities] has really been from the ’90s onward,” says Bruno H. Schöpfer, managing director of Bürgenstock Selection. “There was a recent decline with the financial crisis in 2008, but the market is picking up again.” Schöpfer was tasked with reimagining the historic Bürgenstock Resort, a 148-acre mountain enclave perched above Lake Lucerne in Switzerland. The resort has an epic and storied history: In 1873 the first hotel opened, and in the 1950s, Hollywood icon Audrey Hepburn married Mel Ferrer in the Bürgenstock Chapel. Soon, stars such as Carlo Ponti and Sophia Loren were calling the resort home. After being closed for 9 years for historic restorations and new construction, the reimagined Swiss resort showcases hotels, restaurants, bars, a spa, and 67 new residences, including 29 Grand Residence Suites (built in the footprint of the original Grand Hotel dating to 1873) and 28 newly built Panorama Residence Suites, opened this fall and available for rent with a 6-month minimum lease. Ten exclusive lakeview villas will also be available for sale or rent, depending on Swiss law and regulations. They range from 5,791 to 8,762 square feet, overlook the lake and mountains, and are equipped with private plunge pools and outdoor patios. “The atmosphere of the resort, with its own funicular and shuttle service, has the feeling of a village rather than a classic resort,” Schöpfer says. Its proximity to European hubs is another definitive draw.

The perks that come with living in a resort community are multitudinous: top-notch restaurants, spas, and fitness facilities on-site; attentive staff members; catering, cleaning, and concierge services; a home in a beautiful location that is largely maintainence free; a safe and vibrant community; and, often, the ability to place the home in a resort rental program and earn money when away. Resort residences are often second and third homes, which means unique locations can be a deciding factor for buyers.

The Arizona Biltmore, a landmark property in Phoenix that opened in 1929 and has been called a jewel of the desert, is popular with vacation-home owners, especially those looking to escape the long winters in the northern United States and Canada. In 1995, the resort began building residences; today, there are 78 one- and two-bedroom villas ranging from 1,200 to 1,600 square feet and equipped with stainless-​steel Frigidaire appliance packages. (Current listings are priced from $700,000 to $900,000, and units can be placed in a rental program.)

On the more tropical end of the spectrum is Placencia, a narrow white-sand peninsula in Belize with the glassy Caribbean Sea on one side and a turquoise lagoon on the other. The Belize Barrier Reef, the largest one in the Northern Hemisphere, is a main draw for snorkelers, with sea turtles, nurse sharks, and multicolored fish swimming beneath crystal-clear waters. And the Great Blue Hole—an impossibly blue underwater sinkhole—is regarded as one of the top diving sites in the world.

When Irish brothers and developers Colin and Ronan Hannan were looking for an up-and-coming place to build a luxury resort, they considered Vietnam and Argentina before stumbling onto Belize. “We wanted to build in a really interesting and original place that people hadn’t quite discovered yet,” Colin says. “And then there was this friendly little country seemingly on the doorstep of America. We knew about the beaches and reefs, but there’s also the biggest underground cave system and the Mayan culture. There were over a million people here in the time of the Maya civilization, and relics and remnants of the civilization are everywhere you go.”

Their resulting project, Itz’ana Resort & Residences, is a 20-acre beach resort and residential community slated to open in January 2018. The grounds include a hotel, 46 one- to five-bedroom waterfront residences, two swimming pools, two restaurants, a spa, and a speakeasy-style rum room hidden behind an armoire that houses one of the largest rum selections in Central America. Jungle and sea meet in the main restaurant, Limilia, where glass doors face the water. Outside, beachfront tables allow residents to dine underneath the stars with their toes in the sand—an elevated take on the picnic concept. More than 300 Mayan artifacts will be displayed in the resort, and murals painted by the artist George Venson will give public spaces a distinctly Belizean ambience.

Interior designer Samuel Amoia mixed tropical accents and rustic charm in the residences, which are all furnished. The listings include lagoon villas—built around an 18-slip marina that can accommodate boats of up to 68 feet—free-flowing beach villas with private pools and gardens, and penthouses with plunge pools. Prices range from $329,000 to more than $1.1 million, and all residences can be placed in the resort’s rental program. “A lot of beaches are more one-dimensional; you just lay on the beach with a cocktail. We wanted it to feel multidimensional—full of character and surprise,” Colin says.

Resort amenities are a major draw for those who want to pursue their passions without leaving home. Mexico’s Chileno Bay Resort & Residences, which includes 32 two- to six-bedroom villas priced from $1.5 million, features a Tom Fazio–designed 18-hole championship golf course overlooking the Sea of Cortez.

Waterfront community Caroline Bay, Bermuda, will feature 149 Ritz-Carlton Reserve Residences, giving owners access to the adjacent Caroline Bay Marina, which has slips for up to 30 superyachts. And Golden Oak, a master-​planned community with 300 homes, is located within Walt Disney World Resort—a magical distinction for Disney aficionados.

Twenty acres of the Golden Oak development will contain the Four Seasons Private Residences Orlando at Walt Disney World Resort, a collection of 30 custom, whole-ownership, single-family homes on half-acre lots. Ranging from 6,000 to 10,000 square feet, the six- to eight-bedroom homes are priced from $5 million.

Homeowners will have access to Four Seasons amenities such as the 5-acre water park, a 13,000-square-foot spa, six restaurants, and, of course, all the Disney parks.

In the late 1800s, private bathrooms and electricity were considered the pinnacles of luxurious living; today, buyers are looking for vibrant locations, state-of-the-art amenities, and exclusive services that can’t be found elsewhere. Resort residences afford the privacy, service, and convenience that made hotel residences popular more than a century ago—and even extend those benefits to the whole family. They allow owners to be at home, even when traveling in pursuit of their passions.