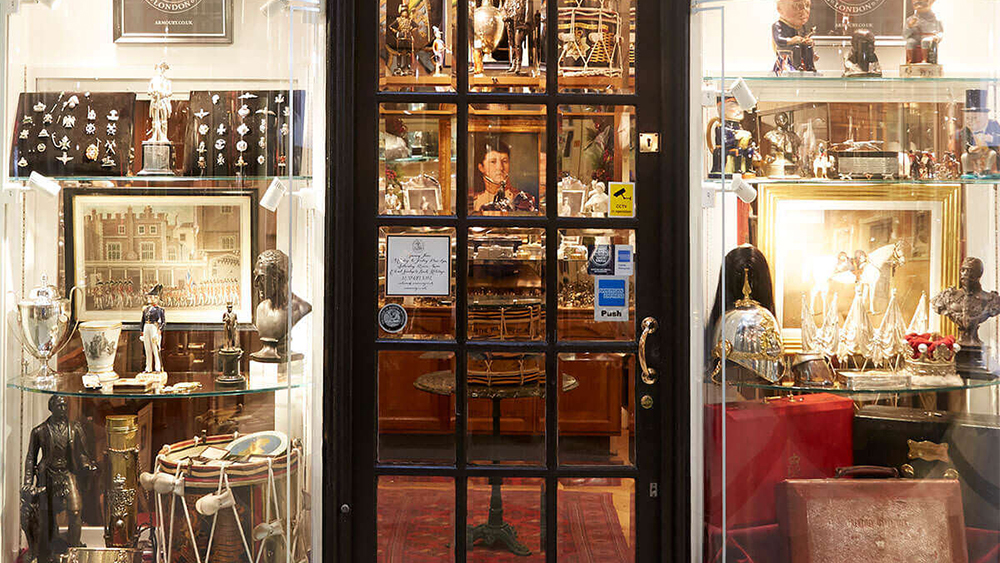 The Armoury of St. James

Since its 2017 founding, Rowing Blazers has partnered with idiosyncratic brands ranging from Warm & Wonderful to Murray’s Toggery Shop, making their wares newly accessible to fresh audiences. Its latest dalliance is with The Armoury of St. James’s, a London shop specializing in military antiques, regimental brooches, royal presentation items and other Anglophilic treasures.

“The Armoury of St. James’s is the kind of place you’d see in a film or read about in a book but, even then, you wouldn’t believe it exists in real life—at least not quite so perfectly. But it does!” Rowing Blazers founder Jack Carlson tells Robb Report.

Carlson, who holds a doctorate from Oxford and has previously penned a book on heraldry, may be uniquely qualified to comment on the store’s wares. However, his inspiration for adding the 30-year-old shop to the Rowing Blazers fold comes from a universal pastime: Instagram scrolling.

“I’ve known about the Armoury of St. James’s for a long time…they are an institution in the famous Piccadilly Arcade,” he says, adding that it was during the pandemic’s abundance of screen time that he “started going deep” in the store’s social media.

Rowing Blazers has since added dozens of items from The Armoury of St. James’s directly to its website, including miniature regatta prize oars and regimental stickpins. While distinct from anything that Rowing Blazers has offered before, the goods feel at home with the label’s often-esoteric lens.

“The badges, the heraldry—this is a part of the varied and eclectic world of Rowing Blazers,” Carlson says. “They are the kinds of things on which many Ralph Lauren graphics are based. It’s cool to have the real thing.”

With that in mind, we asked Carlson to shine a spotlight on five of his personal favorites below.

“The dragon passant is the perfect shape. The ruby eye and the green and blue enamel are just the perfect color combination.”

“This is truly a piece of history. 18-carat gold cuff links that would have been given as a gift by Queen Margherita of Savoy (1851-1926)—for whom the Margherita pizza is named!”

“The Metropolitan Regatta, or ‘Met’ as it’s colloquially known in the rowing community, is a major fixture on the British spring rowing calendar. This medal is a work of art, emblazoned with the arms of the City of London.”

“Another incredible regimental brooch that is a work of art. The caduceus of the RAF Medics is a brilliant shape—and an international symbol for medicine everywhere. This is from around 1930 and would be a great gift for a doctor.”

The Armoury of St. James

The 50 Best Gifts for the Women in Your Life, From Cashmere Sweatpants to High-End Handbags