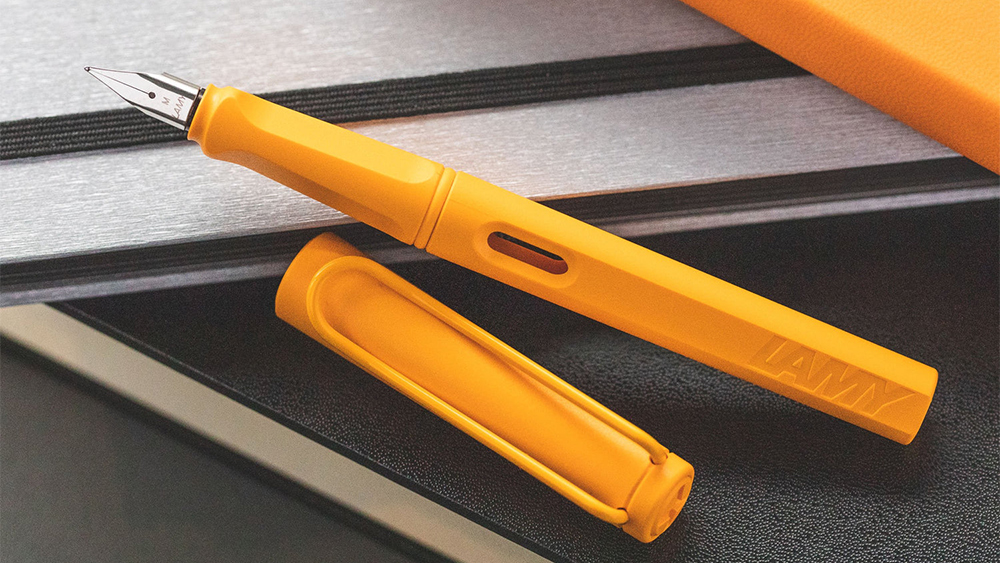 The fountain pen has a bad rap. Often seen as more finicky than its ballpoint cousin and too precious to use on a daily basis, fountain pens aren’t the first writing instrument that comes to mind for most people. And most people, I’m afraid to say, are wrong.

A fountain pen—though a tad anachronistic and, yes, requiring a little effort—provides an incomparable writing experience that any discerning note-taker can appreciate. The main problem with adopting a fountain pen as one’s primary writing tool is knowing where to start. Between nibs, inks, cartridges and converters, just learning the basics can be daunting.

But, that’s what this guide is for: Breaking down the essentials to know when shopping for your first fountain pen, with a few recommendations to get you started.

Why Use a Fountain Pen?

I’m not knocking other writing utensils here, but if you want to feel like you’re writing, nothing compares to a fountain pen. Because of the engineering that goes into fountain pens, these instruments provide an ink flow that’s great for long-form writing without fatiguing the hand.

People also love fountain pens because of the variations in nib sizes (the nib is the tip where ink is dispensed, various options offer different line thicknesses). With most other styles of pens, one is limited to just a couple size options, handcuffing you to a 0.7-millimeter ballpoint until you throw it away. With a fountain pen, most manufacturers offer nib sizes that range from extra-fine to broad, which means that the pen works for how you write, not the other way around.

Nibs, as well as ink, can also be changed during the life of the pen itself. This customization is a selling point for many fountain pen users who invest in a specific pen but want the ability to mix-and-match depending on use. Manufacturers make nibs to purchase separately for you to switch out, while the reservoir can easily be filled with another ink color. So, even if you bought your fountain pen with a fine nib and black ink, a couple months later, you can use the same pen with a broad nib and purple ink. This interchangeability gives writers ample room to play and make their purchase feel like new over and over again.

Fountain pen users also enjoy the mechanics of the pen itself and the tactility of caring for it. For some, half the fun of owning a car is getting under the hood once in a while. It’s no different with a fountain pen. Unscrewing the nib, getting a syringe in the inkwell, flushing the ink feed with water, polishing the clip—it’s a meditative practice that makes one feel connected to the object versus the random Bic you swiped from the doctor’s office.

How Much Do They Cost?

Like cars, the price of fountain pens varies significantly on make, model and mileage. A beginner pen can cost well below $100, while the majority of quality fountain pens fall in the $100-$200 range. That being said, there are collectors who shell out upwards of $30,000 on a pen if it’s a limited edition or if there is an artisanal quality to the production process. Don’t worry, none of the starter pens we’re recommending are in that stratosphere.

The 5 Best Fountain Pens for Beginners

For anyone with even a passing interest in fountain pens, there’s a good chance that the Metropolitan has come across your radar. It’s a ubiquitous first-timer pen and for good reason: The weighty metal barrel feels more substantial than its sub-$20 price tag. Coming in a range of colors and standard nib sizes, this will give you the feel of a fountain pen without much investment.

The Safari hit the market in the ’80s and has sustained popularity ever since. With its candy-colored pens and nibs for any user, including lefties, the Safari is a fun pen that’s a step up from the Metropolitan for learning the basics. And if you’re looking for something more akin to a rollerball, this is your pick.

Diminutive or downright cute, the Kaweco Sport pops up in most stationery stores and bookshops for its popularity among both the curious and collectors. The Sport model is about half the size of a regular pen, which is great for everyday use—just throw it in your bag and go.

Parkers populated Mad Men and revived the public interest in the Jotter. It’s obvious why: Taking style notes from mid-century design, this slim metal pen would sit nicely in an ad exec’s jacket pocket (right next to a flask and a wad of cash, naturally).

This is my go-to pen and has been for months now. The 1911 Profit Junior is based on the standard 1911 model, which hovers in price around $200. This is just $25 and it’s hard to tell the difference between the two when put head-to-head. These pens are usually exclusive to Japan, so to find it with an American retailer, and at a price point that isn’t inflated, is a nice surprise and the perfect entrée to fountain pens.