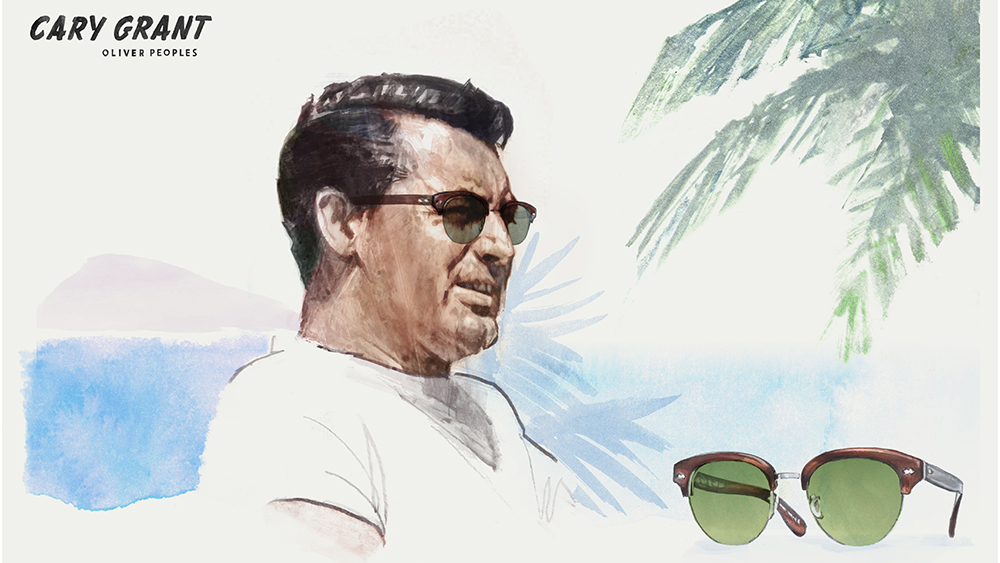 The term “style icon” gets bandied about so much these days that the words have lost their weight. Sure, Harry Styles has great fashion sense but is he an icon? I’m not sure; let’s give it 30 years. Cary Grant, on the other hand, is a style icon for the ages. When the actor passed away in 1986, his New York Times obituary was headlined “Cary Grant, Movies’ Epitome of Elegance, Dies of a Stroke”. Even the newspaper of record acknowledged that the man’s life and legacy was as much about style as it was his on-screen accomplishments. Grant’s charm and easy sophistication really was elegance personified—no doubt, the reason why he’s a fixture on many menswear designers’ mood boards. But none of those brands can claim Grant’s proverbial seal of approval, except for Oliver Peoples.

Last year, the eyewear brand joined forces with Grant’s estate, managed by his wife, Barbara Grant Jaynes, and daughter, Jennifer Grant, for a collaboration—the Grants’ first ever. And today, they’re releasing the latest incarnation of glasses that embody the ideals of elegance that Grant epitomized. Where the initial collaboration was directly inspired by frames Grant wore in North by Northwest, the Cary Grant 2 nods to Grant’s off-duty style.

“On or off-duty, Dad dressed with purpose,” Jennifer Grant tells Robb Report. “Elegance wasn’t just a look, it was his lifestyle. He didn’t believe in fashion, per se. He believed in adhering to classic principles: you buy only the best quality products with timeless design. It’s a far more sustainable model of luxury.”

Those principles of quality and timelessness are one of the main reasons why the estate decided to collaborate with Oliver Peoples out of all the many brands that would surely jump at the chance to tap into Grant’s legacy. The L.A.-based label has long been known for superlative craftsmanship and an aesthetic that tempers vintage inspiration with a modern sense of understatement. It also helped that eyewear was such a memorable feature of Grant’s look.

“It was rare to see him without glasses,” Jennifer recalls. “He didn’t like anything impractical or fussy. He always said ‘You should see the person coming, not their accoutrements.’ It’s a bold simplicity to wear things which highlight you, not the objects themselves.”

The Cary Grant 2 certainly achieves that balance between distinction and subtlety. The design features an acetate brow bar and arms combined with a metal bridge and eyewire, free from embellishment except for a discreet CG monogram at the temple tips, drawn from Grant’s personal stationery. It’s a nuanced riff on the ‘Clubmaster’ glasses that were popular among midcentury men of style.

“The new design conveys the look of Hollywood in the ‘50s and ‘60s—the quintessential silhouette for film and TV at that time,” says Giampiero Tagliaferri, Oliver Peoples’ creative director. “Yet it feels relaxed in the way Cary always appeared. It offers relaxed elegance in the same way Grant—and California—does elegance: effortlessly.”

The glasses, which are available as both sunglasses and opticals, come in five different colorways, including a ‘Grant tortoise’ exclusive to this collection. Even if these exact frames never graced Grant’s chiseled visage, his widow Barbara assures us that “the glasses are as Cary would have worn them.” Are there any men of today who could wear them with equal panache?

“Mahershala Ali,” says Jennifer, noting the actor helped co-host last year’s launch. “He best illustrates the self-composed dignity Dad lived his life by. It shows in his artistic choices, wardrobe and his commitment to his family. We thought long and hard about who would best represent Dad in today’s world and, lucky for us, Mahershala believed in Dad and Oliver Peoples.” With those two names and glasses these good, though, who wouldn’t be wooed by the elegance of it all?