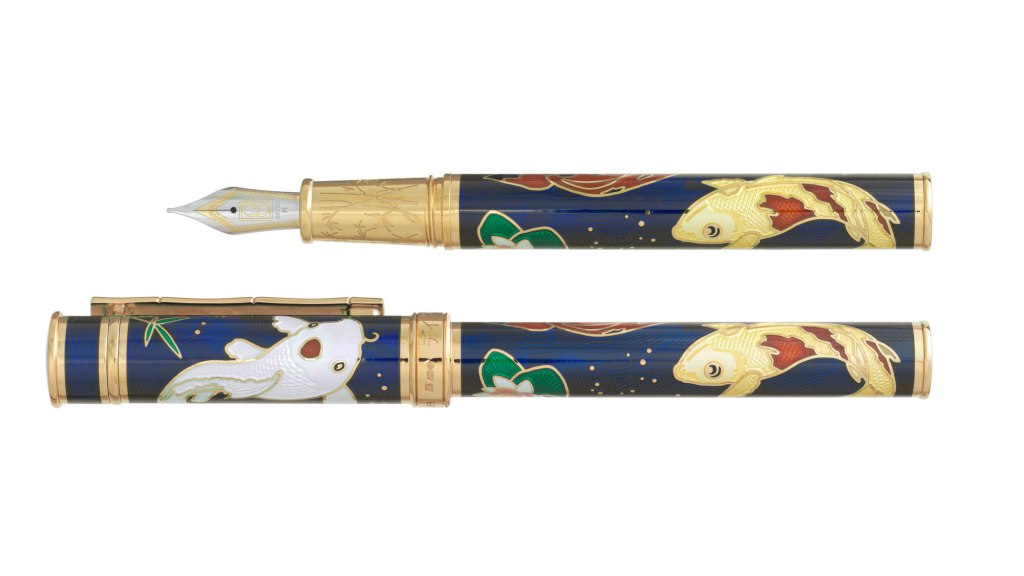 St. Louis–based pen maker David Oscarson has tackled an impressively broad range of themes through his design work. His writing instruments have paid tribute to everything from the changing seasons to the sea, scientists to explorers, and seemingly everything in between. His 27th and latest pen collection, simply dubbed Koi, is ostensibly about the Japanese fish, but Oscarson imbues the pieces with deeper meaning.

The collection, which depicts images of koi swimming around the barrel of the pen, was created to commemorate a trip that Oscarson took to Japan last year with his eldest son, Grant. There he learned that although “koi” is a Japanese loan word, it actually refers to all kinds of carp. The colorful fish that koi is associated with in English are specifically called niskikigoi, which is a word that also means affection and love. Therefore, koi have become symbols of love and friendship in Japan.

Playing off of this dual meaning, the Kanji character for niskikgoi appears in high relief on the top of the pen’s cap. An engraving of Oscarson’s name in Japanese also adorns the cap and the pen’s clip is stylized as a stalk of bamboo.

The barrel and side of the cap depict three swimming koi fish along with bubbles, a waterlily, and bamboo leaves. These images are rendered in what Oscarson calls “mock” maki-e, a play on the traditional Japanese decorative technique in which designs are created by sprinkling metallic powder onto wet lacquer. The pen maker has adapted the style of these designs to his own favored decorative method, guilloche enameling—using both high and low relief to create the depictions.

The Koi collection will be primarily produced in three colors—teal, red, and blue—but Oscarson will also make variations in other shades in very limited batches. Rollerball versions are priced at $5,600, while fountain pens are $5,800.