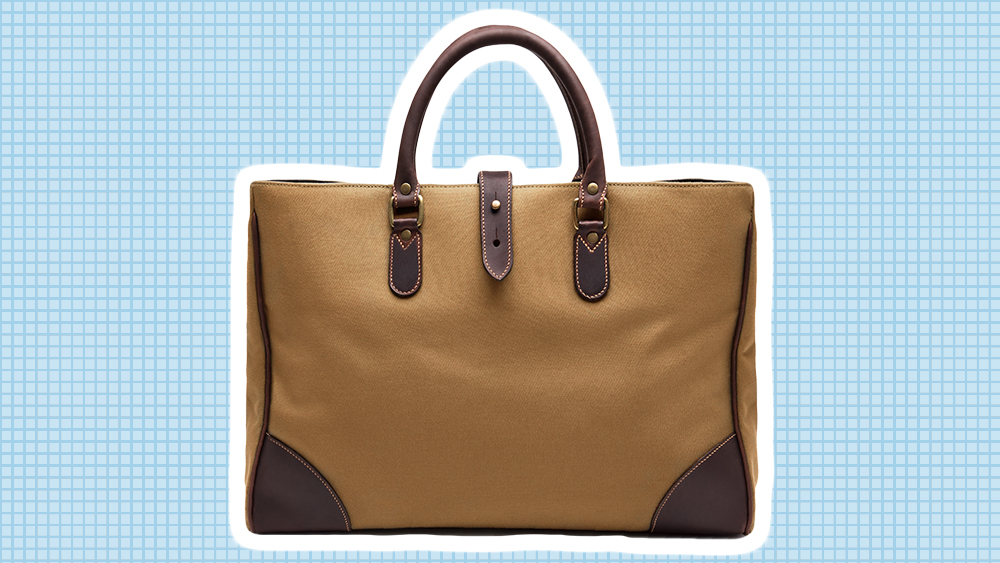 We are happily decades removed from the time when adopting a simple messenger bag at the office raised eyebrows. Today, American men are awash in bags, from waxed canvas totes to alligator leather briefcases. And although societal norms have changed, the size of our apartments hasn’t.

As such, finding the mythical one-bag-that-can-do-it-all remains a pressing concern. This holy grail might never truly exist, but Ettinger’s Piccadilly Canvas Tote gets awfully close.

The bag from the English maker and Royal Warrant holder (they’re Prince Charles-approved) is classified as a tote and made from a substantial cotton drill that feels as if it could stop bullets. It also features an open top, which can be closed with a handy strip of waxy-grained leather. Brilliantly, it includes a zipper-secured pocket divider in the center that holds keys, sunglasses and other small items you don’t want to risk slipping out.

However, its other leather features—including trim, handles, reinforced corners and most vitally, a bottom that allows it to stand—make it briefcase-like in appearance and structure. I’ve found that I can just as easily use it to haul a pair of trousers to the tailor, pack away books and chargers for a long-haul flight, or transport my laptop and notebooks to wherever I happen to be working from next.

And as the nature of where we work gets ever fuzzier, a bag like the Piccadilly may grow in usefulness. It’s an errand tote when it needs to be, a daily commuter when it’s called upon and, not accidentally, something that looks great serving either function.

I chose the sand cotton-Havana leather colorway for my own bag, which has already begun to take on a nice patina (while I’m trying not to be too precious, company CEO Robert Ettinger tells me that warm, soapy water cleans the cotton easily). I also sprung for the chance to have my initials embroidered on its side, which I’m telling myself may turn out to be a practical as well as an aesthetic choice: I expect to see more many Piccadillys being carried in the future.