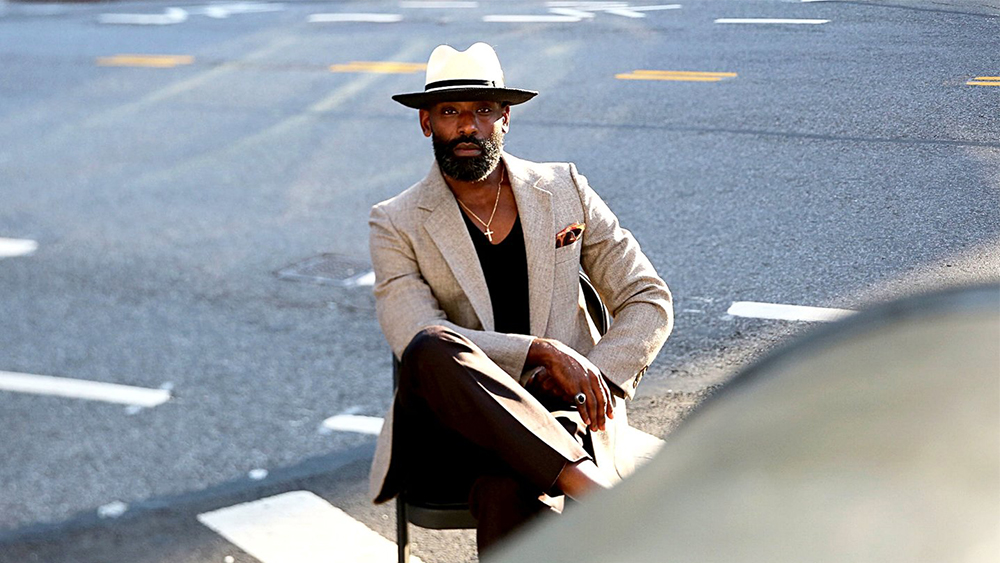 Had he not opened a hat store, Marc Williamson could have been an incredible motivational speaker. Williamson, the owner of Harlem’s FlameKeepers Hat Club, says that although hats are his business, they’re really secondary to the experience he wants you to have when you walk through the doors: “The hats are a vessel. We’re here to enhance your day!”

In the hat business for over 20 years, Williamson stumbled into the industry as a part-time student in need of a job and wound up sparking a life-long love of the accessory. Though successful in that position, the born-and-raised New Yorker always wanted his own business. So in 2014, inspired by the vitality of the area, he opened up shop: “There was an energy in Harlem,” he recalls. “It was not a shopping destination yet. I wanted to be one of the pioneers.”

Williamson has added more than just a business to the area—he’s created a community hub, a place where people can go to fill up on positivity and graciousness. As local artist Pel explains: “Marc’s store is church. I tell him that all the time. You go in there and you leave with your spirit full. The conversations are rarely about a hat; they are about spiritual elevation, finding and manifesting your higher self.”

As an example of just how loyal the community is, consider that 90 percent of the purchases made when the shop re-opened after the initial pandemic lockdown were made by repeat customers.

One of those regulars, Irnice Williams, agrees that the business goes well beyond fedoras and boaters: “You forget that you are on one of the busiest corners in New York City and he sets the vibe right by just being who he is. The hats just complement the experience.” Williams notes that there’s another reason she’s a FlameKeepers loyalist: “I am a strong supporter of small-owned and Black-owned businesses, and it is important that my dollar circulates in my community.”

Not surprisingly, the store offers a comfortable, unintimidating vibe—a major attraction for those who might be new to wearing hats. Williamson is particularly sensitive to the fact that first-time hat buying can be an intimidating process, especially for men, who he says “don’t reinvent themselves as often as women.”

Pel vouches for Williamson’s easy approachability: “He doesn’t try to sell you on the product, he is just helping you to find something that speaks to you. I also like the fact that, as intimidating as coming into a hat store may be for some, he will let you know that his shop is not a museum and it is more of a pet store. By that, he means you can try on and play with any of the items, and they want to go home with you as well.”

Williamson’s tips for first-timers? Whatever you buy, he advises, “You have to feel as comfortable in this hat as you would in a baseball cap.” If you don’t, he warns, it’s much more likely that the hat will spend more time on the shelf than on your head. He also recommends tying the colors of your hat into the color of the shoes you wear most often: “Once there’s a connector at the top and at the bottom, the colors in the middle can be anything you want.”

His packable hats, made from a high grade of felt, are among his most popular and a great point of entry to the world of millinery. “A classic fedora has a leather sweatband in it,” Williamson explains, “but these have a cotton or fabric sweatband so it’s very comfortable.” And with prices ranging from $150 to $200, he notes, “It’s not a hat you have to baby.” It’s an ideal choice for travel, given its water resistance and ability to hold its shape (if for some reason it doesn’t, the hat can always be brought back to the store for a quick steam to restore its original form).

Although the store is on the far north end of town, its presence is felt throughout the city. “If I see someone wearing a hat, I always check for his signature pin and if I see it is from Marc’s shop, there is an instant connection,” Ms. Williams explains. “Everyone says the same thing: ‘Marc is so dope!’”

It’s easy to see why people have that reaction, given Williamson’s philosophy: “If you come visit us, I want you to leave feeling better than you did when you came in—that is in mind, body and spirit.” he says. “To me, good taste is how you treat people.”