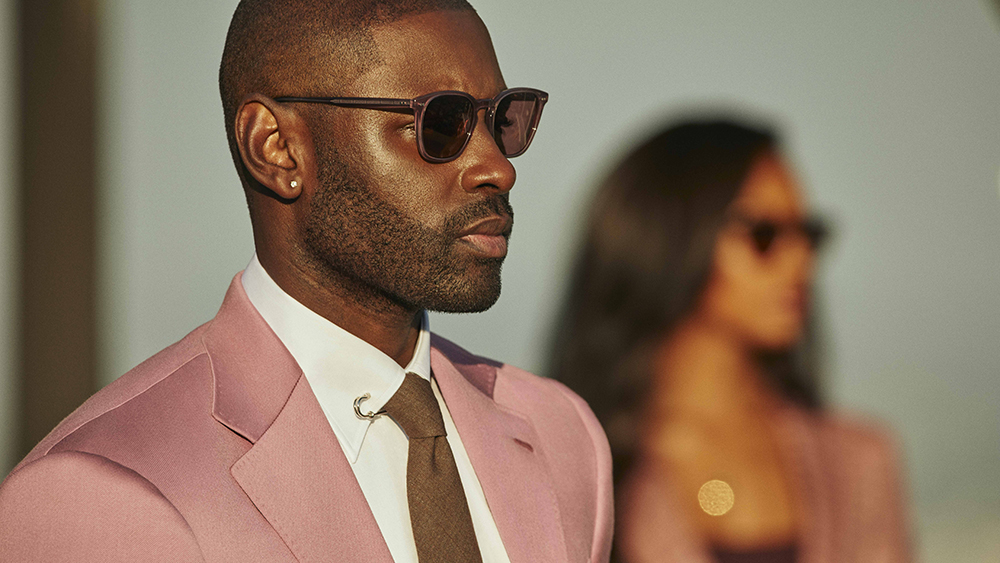 Even if the name Frère doesn’t ring any bells, you’re likely familiar with the brand’s handiwork. Designer Davidson Petit-Frère’s eye for sharply cut suits has earned him a high-wattage fan base including the likes of Jay Z, A-Rod and Dwayne Wade. Now, the bespoke tailor has teamed up with Oliver Peoples for a collaboration that distills Petit-Frère’s signature swagger into frames that are as slick as his suits.

The offering, which launches on May 6, applies the clean, minimalist lines and exacting fit of the designer’s clothing above the shoulders. The Brooklyn native first caught the fashion bug while working in Manhattan real estate. His increasingly dapper custom-made clothing got the attention of friends colleagues and drove so much business to Petit-Frère’s tailor that the company gave him his own line. A few years and several hundred thousand Instagram followers later, he launched his brand in earnest, working with some of Italy’s top manufacturers to produce bespoke suiting for a roster of neo-dandies.

“My background in tailoring played a big influence,” Petit-Frère tells Robb Report, describing his first stab at eyewear design. “The goal from the beginning was to create two unique shapes that would complement everyone, as I aspire to do with my clothing.”

The resulting designs are based on two of the most timeless eyewear silhouettes, a D-frame (called the Frère NY) and an aviator (called the Frère LA). But, much like Frère’s suiting, these classics are made to look distinctly modern. A slim profile, narrow wire brow bar and discreet metal filigree based on the engraving found on an Art Deco lighter all make for shades that speak softly but make a strong impression.

The Frère NY glasses, at left, punch up the classic D-frame, while the Frère LA style is an updated aviator.  Dennis Leupold/Oliver Peoples

The one area where Petit-Frère likes to make a bolder statement is color. Perhaps you recall that baby blue double-breasted suit Jay-Z wore a while back? Or maybe Myles Garrett’s powder pink tracksuit? Petit-Frère’s keen chromatic sense comes through in the eyewear collection’s dusty mauve and sage green variations. Although both models are also available in classic black and tortoiseshell, Petit-Frére encourages guys to “be open to taking risk with colors.” Accessories, after all, are a very good place to start.

This collaboration follows the launch of a ready-to-wear collection in 2019, which prompted Women’s Wear Daily to deem Petit-Frère “a force to be reckoned with in the luxury men’s market.” Last year, he expanded into womenswear and continued growing his A-list bespoke clientele. Considering how bright his future looks, sunglasses are a natural next step.