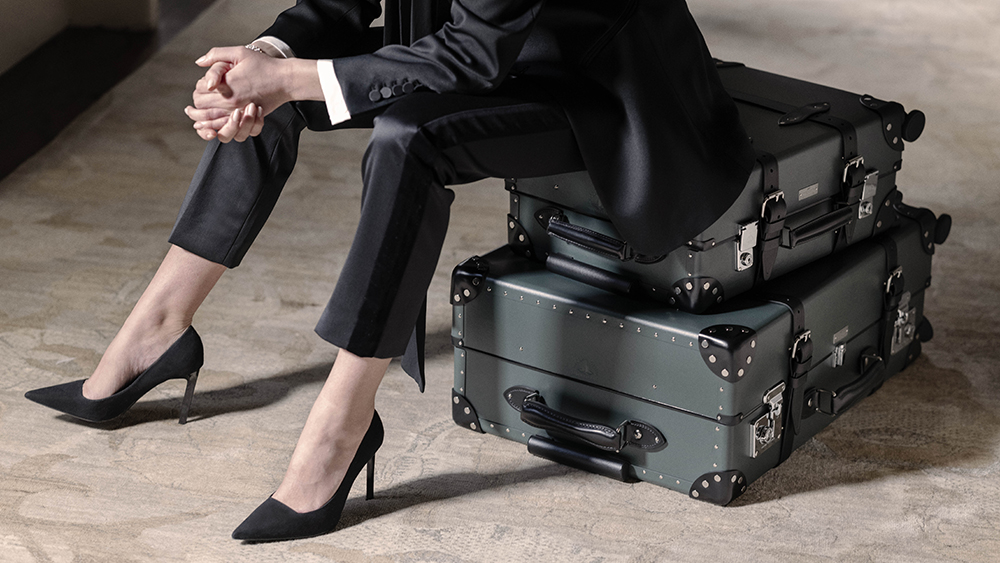 It’s not hard to understand the excitement around No Time to Die, the eagerly anticipated Bond epic which is out in November. It’s the 25th film in the saga and also Daniel Craig’s swansong as the world’s favorite double-O.

But the film is also an opportunity for a number of brands to put their best feet forward with special collaborations. Among them is the esteemed British luggage maker Globe-Trotter, which will make its third consecutive appearance in a Bond Film with No Time to Die.

Working with the costume director, Suttirat Larlarb, the British heritage brand has produced two Bond-themed suitcases fit for travel: a carry-on and check-in size, both made up in an ‘Ocean Green’ color. To complement this exclusive shade, it features black leather trimmings, a wooden rowing handle and four wheels—a first for the brand—to help keep you rolling as smoothly as 007 himself.

Founded in 1897, Globe-Trotter is, like Bond, a national treasure Britain. Its receptacles range from small 7” cases to grand 33” suitcases, all of which are made in its factory just outside London. They’re a sophisticated statement, built to last for years—with every bit of patina contributing to a canvas of travel mementos gone by.

What makes Globe-Trotter unique is its pioneering use of ultra-light vulcanized fiberboard, which it patented in 1902. With a thickness of 1.4mm, it’s compromised of 14 layers of recycled paper that are bonded with a zinc solution. It’s so insanely tough and resilient, a Globe-Trotter advertisement from a catalog from 1912 showed an elephant stepping onto a case—and making little.

Taking a total of five days to create a case irrespective of size, Globe-Trotter’s cases are the product of a streamlined production process that makes use of both cutting-edge machinery and Victorian tools. It starts with the fibreboard, available in a variety of colors, which is cut via a Japanese-made CNC machine.

Because of this machine, Globe-Trotter’s artisans are able to cut the compartments for the four wheels of the Bond cases to the exact measurements; old-school, hand-operated machinery is less accurate. It’s then heat-bended a technique that involves a great deal of handwork and skill, to achieve the final shape.

The second major component is the leather corners, which hold the case together and take the brunt of any damage the case may encounter. Using locally sourced leather, the corners require a little moisture to form the perfect shape. They then need to dry before being attached by hand to each corner and over a prolonged period of time, they completely dry out and in turn increase in strength. Inside the Bond collection cases, there are two removable cotton canvas linings to conceal the internal wheels and handle mechanism to give it a sophisticated Bond-like lift. On the outside, it’s finished with a black leather handle and top-end stainless steel hardware.

Wherever you might be venturing to this coming year, decade and lifetime, you’d be hard-pressed to find a case that endures longer than you will. And, from a stylistic point of view, just like the cars, watches and gadgets, what could be cooler than sporting James Bond’s Globe-Trotter cases?