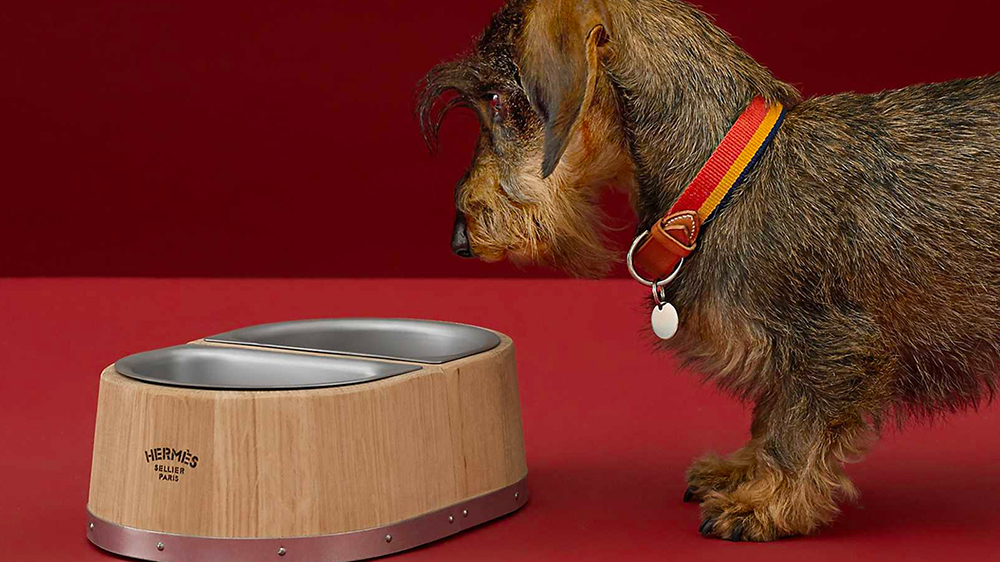 Not all pet essentials have to be an eyesore around the home.

On Thursday, Hermès released a dog bowl inspired by land and sea. The sophisticated dish is made from oak wood and assembled using barrel-making techniques. Its two inner stainless steel bowls can be separated thanks to its central magnets, and can also be removed from the wooden base. The dog bowl has a 10.8” length, 6.9” width and 3.3” height, allowing for considerable food and liquid storage. Similar to most Hermès products, the bowl is made in France, but it’s one of just a few that directly echo the fashion house’s Chaîne d’Ancre motif.

The Hermès dog bowl made from oak wood with stainless steel bowls.  Hermès

According to the French label, the Chaîne d’Ancre embodies the Hermès spirit through a combination of its marine and equestrian inspirations. The motif—which is shaped somewhat like an elongated figure eight—was first noticed by Robert Duman, the son-in-law of Emilie Hermès, while on vacation by the sea. The dog bowl’s shape mirrors the signature symbol, as do other pieces like this sculptural bracelet.

A more intriguing aspect of the bowl, however, is the process it undergoes to match barrel making techniques. Typically handcrafted by a cooper, casks and barrels are made from woods chosen based on the type of spirit they will be used to store. After the staves are selected, the arranged wood is warmed over an open fire that reaches up to 300˚F, then bent into a barrel shape. Newly shaped barrels are returned to the fire for toasting, which crystalizes the natural sugars in the wood, then typically sanded twice before being put to use.

The bowl split into two, as seen alongside its central magnets.  Hermès

For the bowl, Hermès’ has gone with oak wood, which is often used for wine production; they have also specifically selected wooden slabs from oak trees that have been growing for at least 90 years. If the Hermès dog bowl is crafted from even just two of the other techniques used to make barrels, buyers can be sure a lot of work went into its creation. The French fashion house sells numerous pet goods, from collars to leashes and carrying bags, but its new dog bowl is truly something special.

Pet owners and gifters alike can buy the Hermes dog bowl now for $1,125 on Hermès.com.