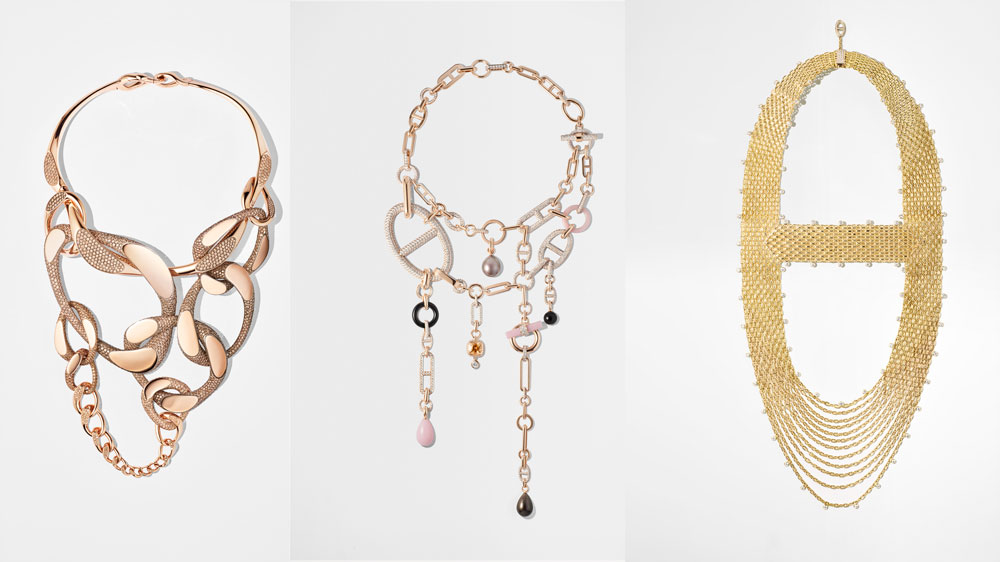 Leave it to Hermès to totally reinvent the idea of the chain for high-jewelry. The Enchaînements Libres collection gives a big and bold new spin to an old jewelry staple while still representing the codes of the maison as a harness-maker and saddler—as well as a nod to its ties to the nautical world. While the collection debuted last summer, the pieces were brought to New York for the first time to be shown to clients. To present the stunning collection, Pierre Hardy, Hermès’ creative director of high-jewelry, took to the stage during a presentation at Jazz at Lincoln Center, where modern dancers, choreographed by Christian Rizzo, opened a show that looked more like a ready-to-wear runway than a high-jewelry presentation. A series of models clad only in black appeared afterward in the new jewels, allowing guests to get up-close to the pieces at the end of the presentation.

“I think jewelry adjusts to the body, and when you show the jewelry collection, the body is not there,” says Hardy. “It’s just objects on a box or in a window. I thought it was nice to place the pieces of jewelry and the body together and see how they can react together.”

It’s a setting with which Hardy is very familiar. In a previous life, the designer was a professional dancer. The show, and the jewelry, proved he’s also an intellectual. The choreography by Rizzo was meant to evoke how human beings are linked, with the dancers intertwining like the jewelry itself. It’s a nice metaphor given that jewelry is almost always inevitably linked either with emotional bonding or feats of accomplishment. But here, pure lust will suffice: Hardy’s interpretation of the chain is enough to make one ponder dipping into a savings account.

The pieces that will send tongues wagging are not for wallflowers, despite Hermès’ reputation for discreet luxury, but they aren’t ostentatious either. Chain necklaces are worn like breastplates on the chest, like the Fusion (seen above), while another version, the Voltige, seems to melt softly against the skin. Both are highlights along with the Adage choker made from oversize links covered in diamonds. The latter is Hardy’s personal favorite and once you see it in person, it’s not hard to understand why.

To mount and mix the diamonds with the gold was challenging, said Hardy of the collection, and the heavy looking fusion necklace was actually made with Titanium sourced from a top Italian manufacture to add a certain levity to the piece, although it’s not immediately visible. Rest assured, however, the diamond setting is done in Paris.

While some of the old houses still tout high-jewelry that looks fit for a princess (and who doesn’t want that too?), Hermès’ out-of-the-box pieces feel fit for a modern queen—the kind that might be lunching and pounding the pavement. And while they feel absolutely of-the-moment, you can imagine the wow-factor being as tangible today as it will be when these are worn decades and even centuries from now.