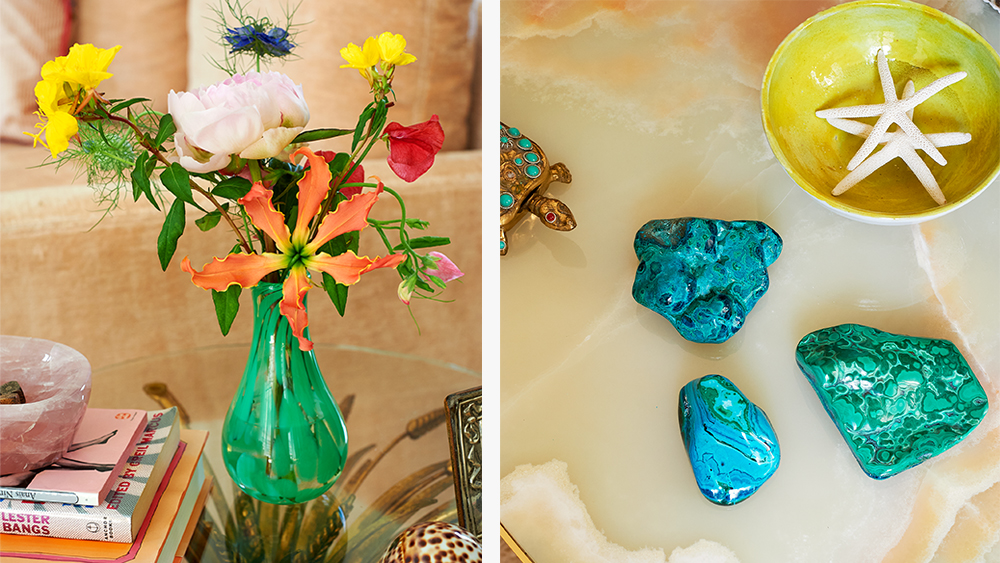 Thanks to Covid-19, the hottest destination of 2020 is one’s own home. The past few months have caused us to spend more time in our abodes than we normally ever would—time that might otherwise be spent sailing the Aegean or off-roading in Mallorca. While the circumstances that precipitated quarantine are far from ideal, sheltering in place has afforded us the opportunity to reexamine the spaces in which we live. In many cases, that has led to the conclusion that our décor could use some spiffing up.

If you’re on the hunt for some stylish objets to accessorize your interiors, Holiday Boileau has channeled its sunny, jet-set ethos into its first collection of homewares. The French brand—an insider favorite for its gimmick-free renderings of retro classics from sack suits to Oxford shirts—tapped jewelry designer Aurélie Bidermann to design and curate an array of pieces that will add a certain je ne sais quoi to any room. True to Holiday Boileau’s roots, the eclectic assemblage telegraphs an air of well-traveled worldliness.

The brand began as an offshoot of the storied magazine Holiday. Launched in 1946, the publication was pioneering in its approach to travel coverage—literary, deeply reported and artfully designed—at a time when commercial aviation gave birth to the modern travel industry. Despite its impressive list of contributors (Steinbeck, Kerouac…E.B. White’s classic Here is New York was originally written for Holiday) and immense popularity, the magazine folded in 1977.

Fast forward to 2014, when Parisian art director Franck Durand revived the long-dormant title. While it may not have quite the ground-breaking novelty of its original run, the new Holiday revives the spirit of intellectually curious globetrotting. And Holiday Boileau provides the corresponding wardrobe. Combined with Bidermann, who is known for a very French breed of bohemian chic, it’s a collaboration with wanderlust written all over it.

“I have been working with Franck for a long time, he is a close friend and I was very excited when he decided to relaunch Holiday. I have all 17 issues at home,” Bidermann tells us. “I must admit that the latest issue about Capri was one of the most special for me. I’m a lover of the Amalfi Coast, so it became a natural starting point for this collection.”

Bidermann looked to the magazine’s archival coverage of the Mediterranean—Slim Aarons’s photographs of the rich-and-fabulous at play were a Holiday fixture—while conceiving the assortment, which includes hand-blown vases and pillowcases in shades of the Riviera. She also got a few other friends in on the action: Paul Arnhold (the partner of Carolina Herrera designer Wes Gordon) provided the glassware while Jamie and Marco Creel, of New York’s Creel & Gow, contributed paperweights and vide-poches in semi-precious stones. Perhaps unsurprisingly for a jeweler, the latter pieces are some of Bidermann’s personal favorites.

“It is really hard to choose! I am very fond of the pillows—their colors, print, pompoms—they transport you to the terrace of a restaurant in Capri,” she says. “My other heartstring goes to the paperweights in turquoise and malachite. The colors are so deep and intense, I can’t resist!”

In lieu of actual travel this summer, these souvenirs of an imagined getaway can bring a bit of Euro élan to your own crib. Best of all, there’s no jet lag involved.