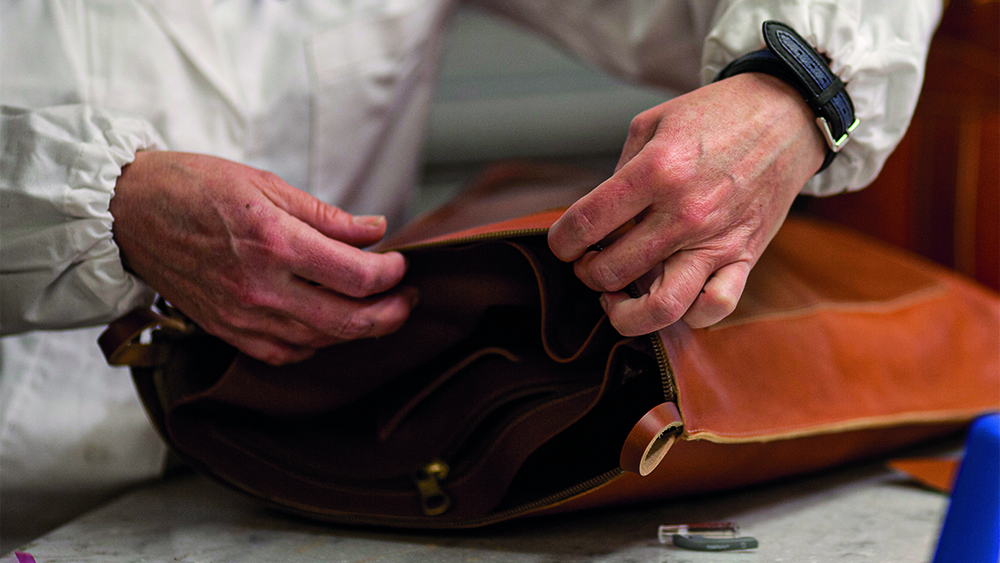 The past decade has seen something of a renaissance in Italian fashion, as houses like Gucci and Versace have rebooted and reasserted il bel paese’s dominance on the international stage. But, successful as Milan’s new wave is, its buzziest brands are about as Italian as Chef Boyardee. That is to say: they have very little to do with the characteristics that first gave “Made in Italy” its best-in-class cachet. Florentine leather specialist Il Bisonte may not be trending on TikTok but, as it celebrates its 50th anniversary, it is one of the few brands championing Italian craftsmanship for a new generation.

Il Bisonte’s origin story is a familiar one, at least for anyone who’s versed in luxury wares. It began life in 1970 as a small, artisanal workshop producing simply designed accessories in the finest Tuscan hides and its reputation for quality spread as discerning shoppers (such as Ralph Lauren and Elizabeth Taylor) made the pilgrimage to its shop in Florence. But while others who started off this way, like Bottega Veneta, have metastasized into global fashion juggernauts with none of that hand-hewn, indie charm, Il Bisonte has remained steadfast in its commitment to doing things the good, old-fashioned way.

“Il Bisonte is real craftsmanship,” Luigi Ceccon, the brand’s CEO, tells me as we meet in the baroque palazzo overlooking the Arno river where Il Bisonte has been based since its early days. “It has its own, strong identity; it’s not copying what other brands are doing. That’s what originally attracted me.”

Since joining the company in 2015, Ceccon has led Il Bisonte in its own renaissance, modernizing to keep pace with the current landscape without sacrificing the slow, considered approach on which the brand prides itself. The company was sold to its Japanese distributor in 2019 (Il Bisonte has 49 stores and a cult following in Japan—generally a harbinger of a soon-to-be fashion phenom) and Ceccone reports that the 2020 finances closed with a net profit despite the pandemic’s turbulence. But more than business savvy, Il Bisonte’s old-world MO is resonating as shoppers place an increasing priority on sustainability.

“Today, everybody talks about being environmentally-friendly but everybody, even Tesla, sometimes isn’t,” Ceccon says. Il Bisonte’s manufacturing methods were green before it became a marketing catchphrase and, for all the ocean-waste-generated nylon and organic, free-range denim on the market today, there still may be nothing more eco-conscious than small-scale, local production. “A lot of Italian brands say ‘Made in Italy’ but, in reality, most fashion companies use production outside of Italy, outside of Europe,” Ceccon adds.

A sense of place is central to Il Bisonte’s goods, and it goes well beyond their typically Florentine aesthetic. Everything in the brand’s supply chain—from tanneries to brass zippers—comes from within a roughly 19-mile radius of its home base. Even the cows that provide its leathers (which are a byproduct of the food industry) can be traced to the Tuscan hills outside the city center. All of the hides are vegetable-tanned, lending them their signature, painterly patina while avoiding the toxic agents typically used in leather manufacturing. In addition to significantly reducing the brand’s carbon footprint, doing everything locally makes the entire production process more ethical: “When you work with these small suppliers, it isn’t industrial,” Ceccon says. “We talk about things.”

The park Il Bisonte donated to the city of Florence to mark its 50th anniversary.  Il Bisonte

Il Bisonte’s commitment to sustainability, both environmental and social, was writ large in its recent 50th-anniversary celebrations. To commemorate its semi-centennial, the brand commissioned a permanent public art installation that transformed an abandoned lot in the middle of Florence into a verdant park with 50 oak trees planted in the shape of a star (which features in the brand’s logo and, more loosely, references Dante). The arboreal installation is intended to help purify the densely populated area’s air quality, while reinforcing the eroding foundation and providing local families with a shady spot to commune with nature. Given its permanence, the park’s design by artist Felice Limosani will continue to grow and take on the character of its neighborhood—not unlike the unique patina that Il Bisonte’s leather goods acquire over time.

Endurance might be Il Bisonte’s greenest trait and the most appealing aspect of its designs. Also to celebrate the big 5-0, a selection of the brand’s most emblematic products—roomy duffle bags, streamlined briefcases, utilitarian totes—have been cherry-picked from the archives and re-issued, arriving in stores this fall. When asked which style best epitomizes Il Bisonte’s oeuvre, Ceccon points to the ruggedly handsome flap-closure briefcase sitting behind his desk.

Ceccon has had it for 30 years—well before he joined the brand—but when he carried it to his first interview with Wanny di Filippo, Il Bisonte’s founder, Filippo teasingly remarked that it was wise to buy one of the brand’s classics before coming to meet him. That even the foremost expert in Il Bisonte’s wares couldn’t tell whether one of its bags was made yesterday or a quarter-century ago goes to show just how timeless they are. As Ceccon says, “That’s the DNA of the brand.”