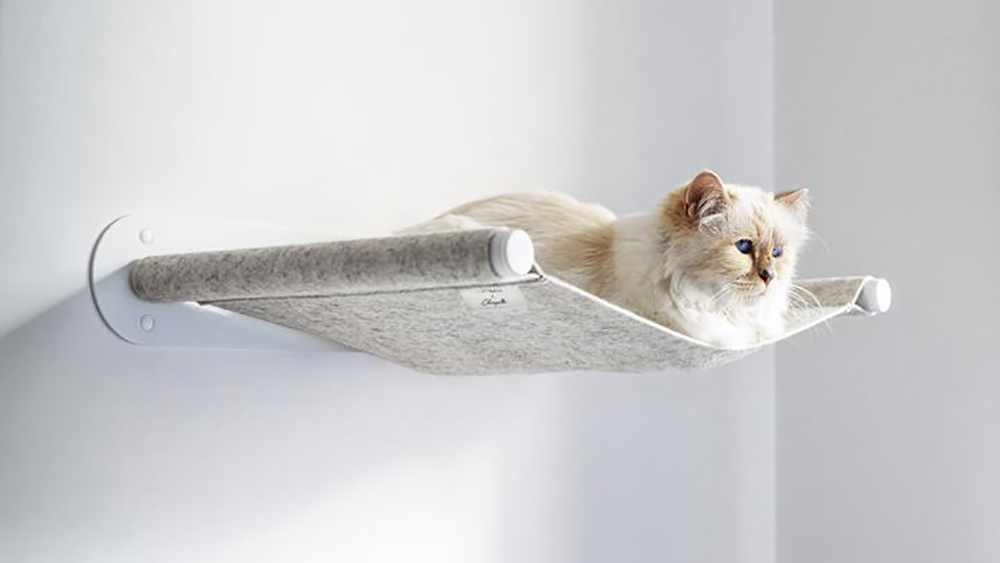 When fashion icon Karl Lagerfield died in February 2019, many wondered what would become of his beloved cat Choupette. But don’t fret. It appears the blue-eyed Birman is staying busy. Recently, she landed on her paws and picked up a new side gig testing out cat hammocks.

LucyBalu, a Munich-based brand that specializes in animal furniture, enlisted the famous feline to cast a (cat) eye over its latest design dubbed “Swing.” Choupette, which means “sweetie” in French, receives thousands of requests and products a day, but the hammock became Choupette’s new favorite place. Her agent, Lucas Berullier, subsequently decided to greenlight a collaboration with the company.

“With Choupette loving her hammock—which she sleeps and relaxes on—it is obvious that not only we, but cat owners all around the world should be introduced to the LucyBalu’s brand and products,” Berullier said in a statement.

The special edition hammock is limited to just 1,000 and priced at roughly $186 (€159). Each piece is numbered by hand and bears the signature of the A-List puss. It is also said to stay true to Lagerfeld’s style code. We’re sure Choupette would accept nothing less.

The hammock itself is made of natural, champagne mélange-colored wool felt which is purrrfectly soft. This cozy material, which absorbs odors and retains heat, elegantly hangs between two powder-coated metal wall mounts. The minimalist aesthetic is sure to blend seamlessly into any living space. The hammock can hold up to 33 pounds (15 kg), making it ideal for two cuddly kittens.

Choupette checking out the prototype.  LucyBalu

Of course, Choupette is no lazy cat. In 2015 alone, she pulled in more than $3 million. She has been featured in glossy magazine spreads, turned into a teddy by German toymaker Stieff, and inspired a makeup line by Shu Uemura called Shu-pette. She has been the subject of multiple books, including one by her late owner. Released in November 2019 by German house Steidl Verlag, Choupette by Karl Lagerfeld sold out within weeks and all royalties went directly to Choupette.

“She is a business,” Steidl told The New York Times last January. “She has a bank account.”

This marks Choupette’s first foray into furniture, but it is likely not her last.

“We are honored to have had the opportunity to be this close to Choupette. I mean, we were the first people to ever be allowed to take pictures and videos of Choupette in her home,” said LucyBalu designer Sebastian Frank. “We are looking forward to further collaborations with Choupette.”

As of now, the special edition Swing is available at LucyBalu and Amazon.

You can check out a short video of the collab below: