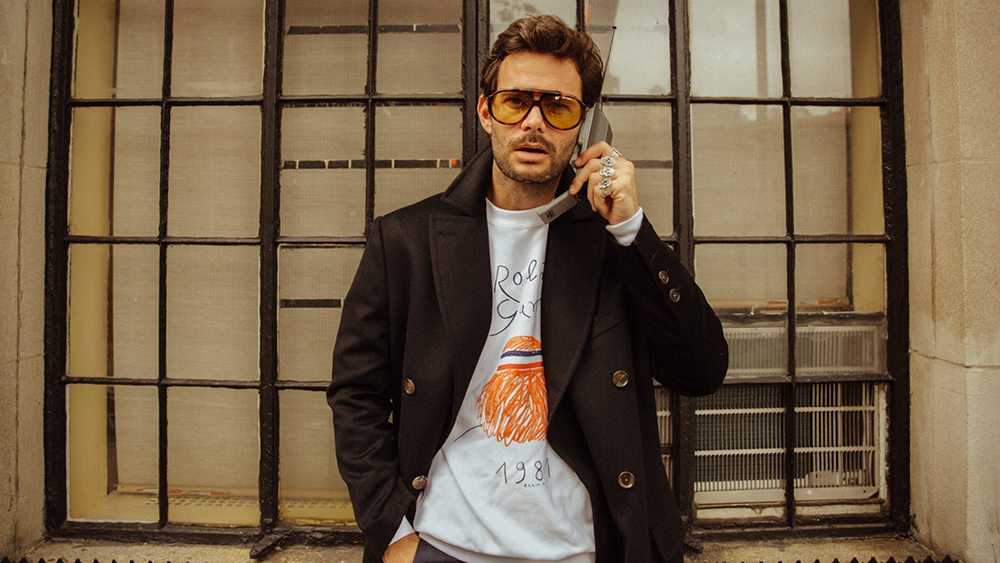 Designers: they’re just like us. While the myth of the fashion savant might have you believe that these arbiters of taste spend their days poring through art books and traveling to far-flung locales in search of inspiration, they’re just as often scrolling through Instagram for a hit of style inspo. That’s how Mark Brown, creative director of British eyewear brand Kirk Originals, struck up a virtual friendship with Fred Castleberry, whose New York-based label F.E. Castleberry does made-to-measure tailoring with an irreverent streak. Lucky for us, that digital connection has materialized in a new, limited-edition pair of shades.

For those who aren’t familiar with Castleberry’s feed, it’s understandable that Brown and the rest of the Kirk Originals team fell for his quirky, pseudo-retro, neo-prepster oeuvre. It’s not just Castleberry’s corduroy suits and regimental stripe separates that appeal, but the world he’s built around them (Stetson hats and a chunky Motorola “Brick” phone are recurring motifs.) That knack for storytelling is what made Brown reach out: “We felt it really chimed with Kirk Originals’ approach to vintage pieces being reimagined for a contemporary audience.”

When the two men met IRL, the partnership fell into place. “The idea was originally gestated around a shared pizza with Fred on his visit to London last year,” Brown tells us. Kirk Originals launched in the ’90s when the Kirk family, whose earlier generations had produced eyewear, stumbled upon an archive of vintage mid-century frames. As such, throwback references are central to all of its made-in-England glasses.

Castleberry’s work often mines the Wes Anderson school of style, so it’s perhaps unsurprising that Adrien Brody’s glasses from The Darjeeling Limited were one of the main inspirations for collaboration’s amped-up take on an aviator. The shape, Brown notes, was drawn from the specs worn by Elliott Gould in Bob & Carol & Ted & Alice—an oft-overlooked touchstone for late ’60s-early ’70s fashion. But these glasses aren’t a reproduction by any means; Kirk and Castleberry turned up the volume by using luxuriously thick 8mm acetate for frames with bolder proportions. Or as Brown says, “Creating almost a fictional version of what we imagine, in our mind’s eye, is a classic aviator.”

Crafted entirely at Kirk Original’s London workshop, the S.A.D. aviators—launching today—were produced in an extremely limited run of 15 pairs. The name is a nod to the pale yellow lenses, a detail conceived to combat Seasonal Affective Disorder—particularly when holed up at home during quarantine. Consider them the rose-colored glasses of our current moment.

“Lockdown happened and suddenly [we had] the idea of introducing the S.A.D. lens into the new shape,” says Brown. “The lens is very much a New York response to our ‘rainy day’ London lens…a pale blue that chimes with the flat grey of London’s sky and architecture. We wanted the S.A.D. lens to feel like its home was in New York: toning in with the brownstones and the Village. It suddenly seemed like a way of bringing a warm glow to everyday life in lockdown.”

Indoors or out, any warmth is a welcome addition these days. And when it comes by way of shades this slick? That’s worth even more than an Instagram “like”—that’s an “add to cart.”