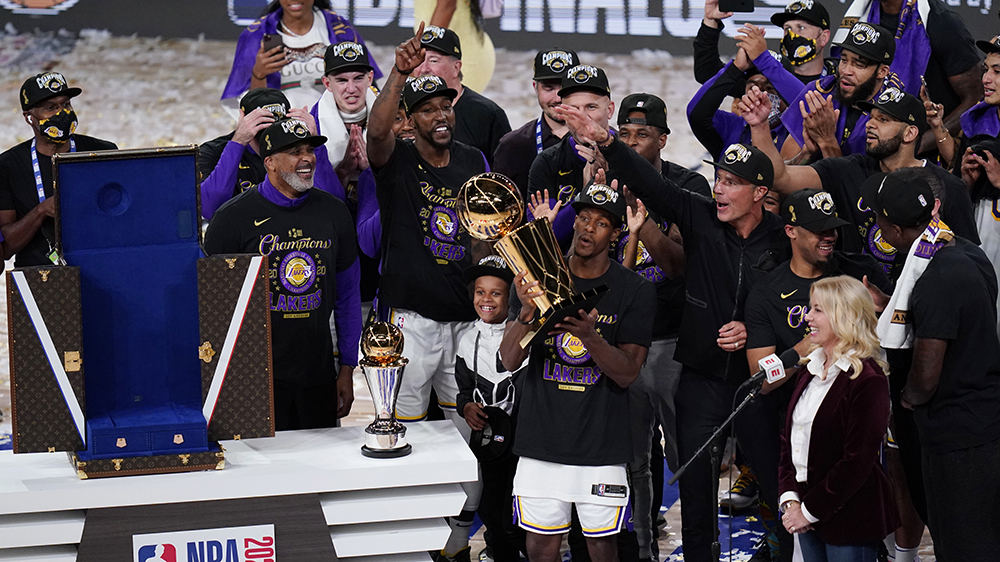 The Los Angeles Lakers are your 2019-2020 NBA Champions and have the trophy to prove it. And this year’s prize, the franchise’s record-tying 17th, was delivered in a trunk hand-crafted by none other than Louis Vuitton.

As LeBron James, Anthony Davis and company celebrated under the confetti in Orlando on Sunday night, the league’s most cherished award, the Larry O’Brien trophy, was wheeled out to center court in a bespoke trophy case designed by the storied luxury brand. And while the Lakers’ commanding 17-point, series-clinching win over the Miami Heat will be what the night is best remembered for, there’s no denying that the trunk made quite the debut

In January, Louis Vuitton and the NBA announced a multi-year partnership that saw the brand become the league’s first-ever Official Trophy Travel Case provider. And as you’d expect, the resulting trunk, the theme of which is Victory Travels in Louis Vuitton, is dazzling. Hand-crafted in the Maison’s historic Asnières Ateliers on the outskirts of Paris, it is wrapped in the brand’s trademark monogram canvas and features a giant white V on the front panels accented with flashes of red and blue, just like the NBA logo. Those panels open up to reveal a dark blue velvet interior specifically designed to house the trophy and keep it free from scratches or scuffs.

“The NBA Finals is defined by iconic players and memorable performances, culminating with the presentation of The Larry O’Brien Trophy,” NBA deputy commissioner and COO Mark Tatum said back in January. “The tradition, heritage and identity of Louis Vuitton create a natural synergy with the NBA, and this partnership provides a unique and befitting way to showcase our championship trophy to our fans around the world.”