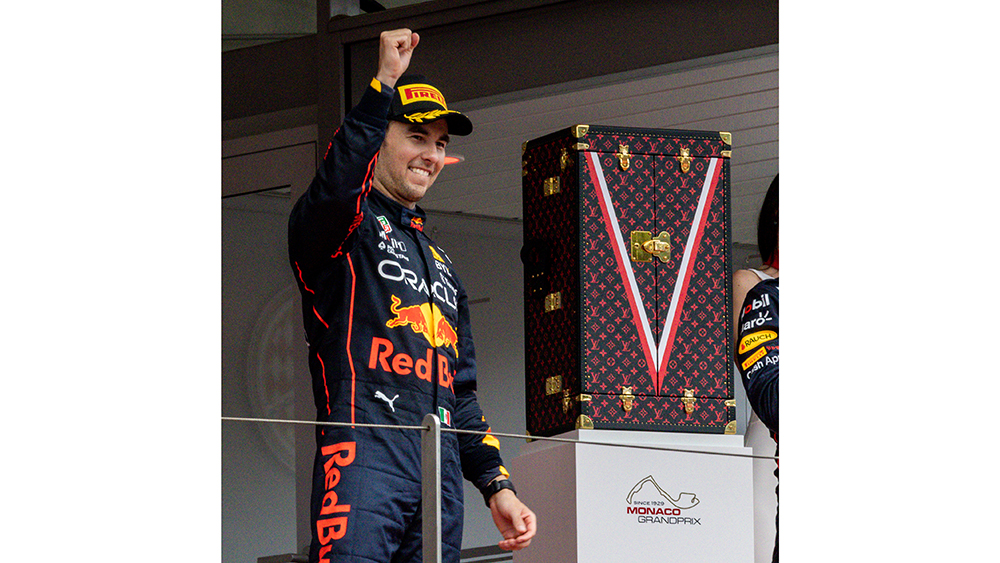 The trunk, designed by Louis Vuitton, was presented to the Mexican racer on Sunday, May 29, by S.A.S Prince Albert II. It sports the same features as the model from the circuit’s 78th edition, which has the French fashion house’s iconic Monogram canvas in the same eye-catching shade of red seen on the Monaco flag. Meanwhile, the hand-crafted trunk’s red lines form a “V” shape that stands for “victory”; these are outlined by a white stripe that mirrors the urban route of the track. The gold trophy itself depicts all 19 turns of the 2.09-mile track.

Though Sunday’s race was delayed due to heavy rain, Pérez—a Red Bull racer since 2020— eventually pulled through with a win. According to Formula 1, the proud countryman has amassed more points than any other Mexican driver in the event’s history. This season alone, he has won 110 points from seven races, which includes his Monaco victory and 4th place positioning in March’s Saudi Arabian Grand Prix.

The gorgeous trunk gives Pérez ever more bragging rights. Louis Vuitton created it at its historic Asnières atelier on the outskirts of Paris as another in its collection of its bespoke travel cases for coveted trophies. A few esteemed awards the Maison has produced trunks for include the Fifa World Cup, the NBA Larry O’ Brien trophy, League of Legends Trophy, Rugby World Cup France 2023, Davis Cup, Roland Garros and the America’s Cup. Each case is a representation of the label’s clever catch phrase, “Victory travels in Louis Vuitton.”

The Monaco Grand Prix was first held in 1929 and is known as one of the most prestigious automobile races in the world. When discussed alongside the 24 Hours of Le Mans and the Indianapolis 500 by racing enthusiasts, it’s known as one-third of the unofficial Triple Crown of Motorsport. Fans will also tell you that the occasion has showcased the skills of some of the greatest F1 champions in history, including winners Aryton Senna, Graham Hill, Michael Schumacher, Alain Prost and Lewis Hamilton, among others.

Last year’s trophy marked the first time Louis Vuitton had collaborated with the Automobile Club de Monaco. And with its remarkable work this second time around, we just may see an all-new case by the fashion label at next year’s Monaco Grand Prix, if we’re lucky.