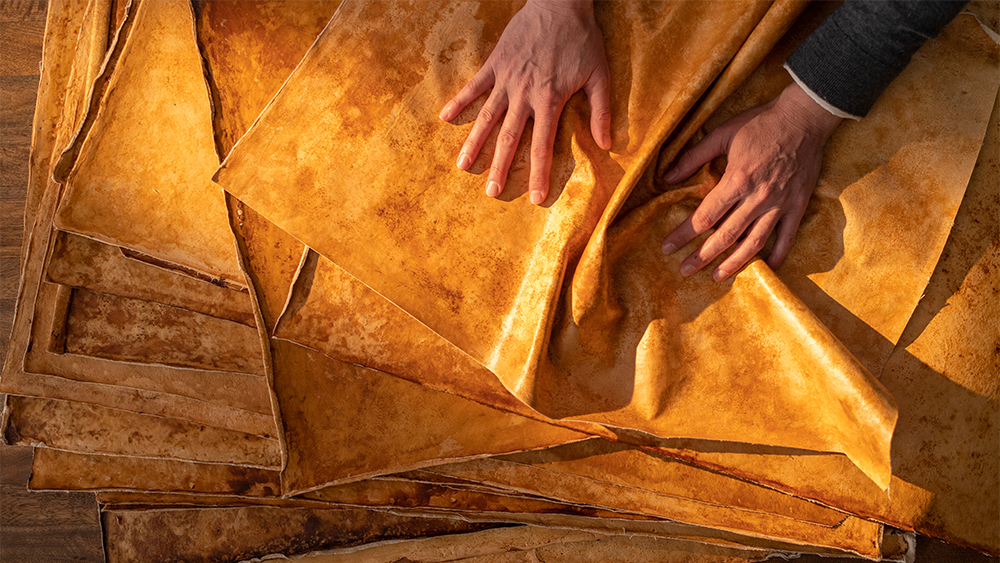 Luxury brands searching for a high-quality, non-plastic leather alternative are getting a helping hand from some magic mushrooms. No, not that kind of magic mushroom, though the process that biomaterials company MycoWorks uses to create its fungi-based leathers certainly has something magical to it.

The natural material is made by the San Francisco-based company through a process that harnesses mycelium, the fine, underground threads that in time grow into mushrooms. “A useful analogy would be the roots and stem of a plant that eventually produces fruit,” MycoWorks CEO Matt Scullin says of the naturally occurring substance. “Mycelium grows abundantly nearly everywhere on earth, often found in soil and among forest beds.”

Via its patented process, MycoWorks grows mycelium into a uniform sheet that has a similar strength and durability to that of animal leather. And much like traditional leather, the resulting material can be dyed, softened and embossed, only without the need for the harsh chemicals that are often utilized in the leather-tanning process.

Behind the scenes at the high-tech facility that produces mycelium leather.  MycoWorks

This lab-based approach comes with another advantage: customization. Mycelium sheets can be custom grown to meet a specific brand’s demands for size, strength, texture, flexibility and other material concerns. This level of specificity is not only great for design, it cuts down on waste—another check in the sustainability column.

MycoWorks, which was established in 2013, has already found takers. In 2021, Hermès became the first brand to feature its signature product when it utilized Sylvania, a mushroom leather created by MycoWorks, to craft a vegan version of its Victoria bag. The lab’s flagship material is Reishi, a mycelium leather that the brand claims can match or even surpass cowhide in terms of its strength and abrasion resistance. According to Scullin, the natural material is already in hot demand.

“Any time a potential partner gets their hands on Reishi, it becomes a lightbulb moment for them,” he tells Robb Report. “Feeling and seeing is believing, and we love it when brands tell us our material is leaps and bounds better than the other alternatives.”

In July, French-American hat designer Nick Fouquet introduced a collection of three hats made with Reishi, which marked the material’s debut on the fashion scene. It consists of an Ecuadorian straw hat and a baby felt suede hat each made with a Reishi band, as well as a bucket hat made entirely from the material. Fouquet, who produced the collection at his Venice Beach workshop, found that Reishi proved easier to work with than leather, and replicates the most attractive qualities of hides.

“The look and feel are organic and surprisingly rich,” he tells Robb Report. “The natural patina process gives it a distressed appearance, which falls well within our universe.”

Reishi enjoyed a similar reception among his customers, as the bucket hat sold out within days of its launch and had to be restocked online. And according to Scullin, demand for the material within the industry has surged, as MycoWorks has received thousands of requests from labels and designers looking to get their hands on it. “This year, MycoWorks will continue commercializing Reishi with a range of carefully selected brands, spanning heritage brands and new, independent designers,” he says.

A hat from the collaboration with Nick Fouquet; the realistic grained texture of mycelium leather.  MycoWorks

What might explain the innovative material’s early success? While the process used to create it is new, the demand that it fulfills is not. “The luxury industry’s desire to add quality animal leather alternatives to its design process is decades old and has increased as companies continue to look for alternatives that fit their and their consumers’ needs,” Scullin says.

All things fungi have been enjoying a boom in popularity, as the plant’s health benefits are increasingly being seen as viable medical treatments. Mushroom-based coffee alternatives and superfood powders are fast becoming the new green juice—a fashionable wellness choice. Whether mushroom leather proves to be a passing trend or a sustainable new category remains to be seen but one thing is certain: We’ve come a long way from pleather.