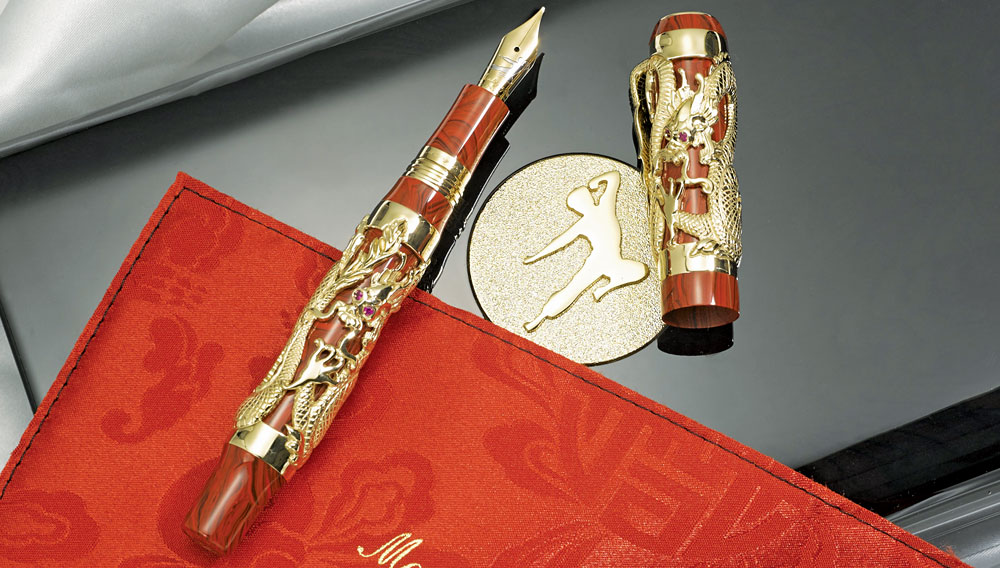 Before Bonhams launched a series of fountain-pen auctions in the United States, the first of which was held in 2009, no major American house had ever hosted a recurring sale dedicated to writing instruments. Last September Swann Galleries in New York held its first pen sale—then followed it with another auction in March. This small but growing roster of events, which will resume with a Bonhams San Francisco auction in June, is helping write a new chapter for the fountain-pen market in America.

Bonhams, which has held auctions of writing instruments in the U.K. and Asia for years, launched its U.S. sale after being presented with an opportunity to handle a large collection of fountain pens. Planned to coincide with the 2009 Los Angeles International Pen Show, the inaugural auction brought in a total of more than $910,000. “We didn’t know at all going into it [how the auction would do],” says Ivan Briggs, a writing-instrument specialist in Bonhams’s San Francisco office. “We just tried to sell the collection of pens and see what would happen. It turned out to be a great success.”

Swann Galleries’ foray into fountain pens was longer in the making. George Lowry, chairman of Swann, has always had a passion for writing instruments, and he had for years entertained the notion of adding them to the auction house’s roster. “I’m old enough to have been brought up on fountain pens,” says Lowry, who was born in 1932. “My earliest memory is coveting my father’s pen.”

In 2012, Lowry brought on Rick Propas, a pen specialist who had recently left his job at Bonhams, to spearhead Swann’s writing-instrument auctions. “I discovered what I knew at Bonhams—there was a market for people to sell pens,” Propas says. “It was easy to build inventory. Literally within a period of weeks, we had both sales populated.”

At Swann’s September auction, two fountain pens tied for the top lot: A circa-1905 Parker Lucky Curve #38 “Snake” and a Montegrappa Luxor Blue Nile, made in 1996, each received bids of $5,520. A Montblanc Imperial Dragon pen set commanded the highest price at Swann’s March auction, selling for $5,760.

Several pens with five-figure estimates will come up for sale on June 11 at the Bonhams San Francisco auction. Among the highlights are a 2010 Montegrappa release honoring Bruce Lee ($30,000 to $50,000) and a 2007 Montblanc Charlie Chaplin skeleton pen ($30,000 to $40,000). Briggs says the Bruce Lee model “instantly sold out upon release into private collections and tends to stay there.” The Montblanc Chaplin pen, meanwhile, is the second such model to have come through Bonhams, the first having sold in June 2012 in New York for $41,250.

Though U.S. pen auctions have a short history, Briggs says American collectors’ tastes are evolving. Fans of modern pens, those made in the 1970s and later—the era when the pen graduated from a functional object to a limited-edition status symbol—rarely overlap with collectors of vintage pens, which date from the 1960s and earlier and often show evidence of use. But the boundaries that separate the two camps of collectors are blurring.

“In the past year, I’m seeing more and more crossover,” says Briggs, who adds that Bonhams’s June auction will include vintage pens such as a 1909 Parker finished in abalone and mother-of-pearl. “Now we’re seeing [collectors of modern pens] buying select examples of vintage pens. They’re finding niches outside their comfort zone. It’s the sign of a healthy market.”

Archaeologists Have Discovered the Oldest Jewelry on Record—and It Dates Back 150,000 Years

26 Luxurious Holiday Gifts to Treat the Women in Your Life

The Duel: The Notorious B.I.G’s Crown vs. Marie Antoinette’s Bracelets

Sunglasses From Persol to Moscot, 11 Pairs of Sunglasses That Won’t Go Out of Style
ad