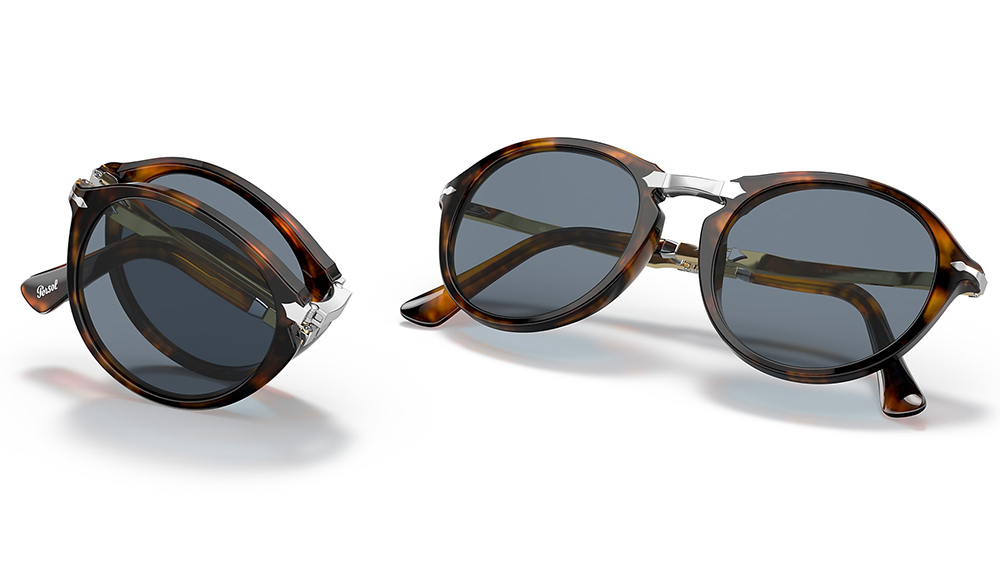 Persol is following up its iconic 714 sunglasses, famously worn by Steve McQueen, with new style that marks a notable first for the Italian eyewear brand.

The new frames, code-named PO3274S, are the brand’s first to feature a mixed metal-and-acetate composition. Their frames and temples feature a folding mechanism for easy storage, which makes them the brand’s second-ever frames to don the feature since the 714’s debut in 1960.  But how do they differ, you ask? The new model’s temples fold inward, not downward, which makes them somewhat simpler to fold up and put away. Now available for May delivery, the frames come in four colorways for $408 each.

The PO32742 frames in the colorway caffe/light blue.  Persol

Beyond picking the color combination you like best, you can personalize the glasses by adding a monogram to the temples, including up to three letters. You can also have the lenses, which offer 100 percent UV protection, fitted with your prescription.

When Persol’s 714 sunglasses were introduced over 60 years ago, they were the first pair of folding frames on the market. The model was originally made as a version of the brand’s 694 style that could become more compact and easier to store. Steve McQueen donned the frames in films like Bullitt, The Getaway and Le Mans; inspiring the manufacturer to create a line of special-edition 714’s based on the King of Cool. The 714’s iconic pilot shape and keyhole bridge, which was designed in 1957 for Turin tram drivers, is similarly replicated in the new PO3274S silhouette.

A profile shot of the frames, showcasing Persol’s signature arrow design on its front temple.  Persol

Persol revived another ‘60s classic from its portfolio last year, known as the PO3260 silhouette. The style was worn by Jude Law in The Talented Mr. Ripley, and the updated edition offered a striking cobalt blue colorway that differed from the classic tortoiseshell or black options—with a limited run of just 200 pairs. Italian actor Marcello Mastroianni also sported the retro frames in the 1960s dramedy La Dolce Vita.

To get your own pair of PO3274S frames for your life’s cinematic moments, visit Persol.com.