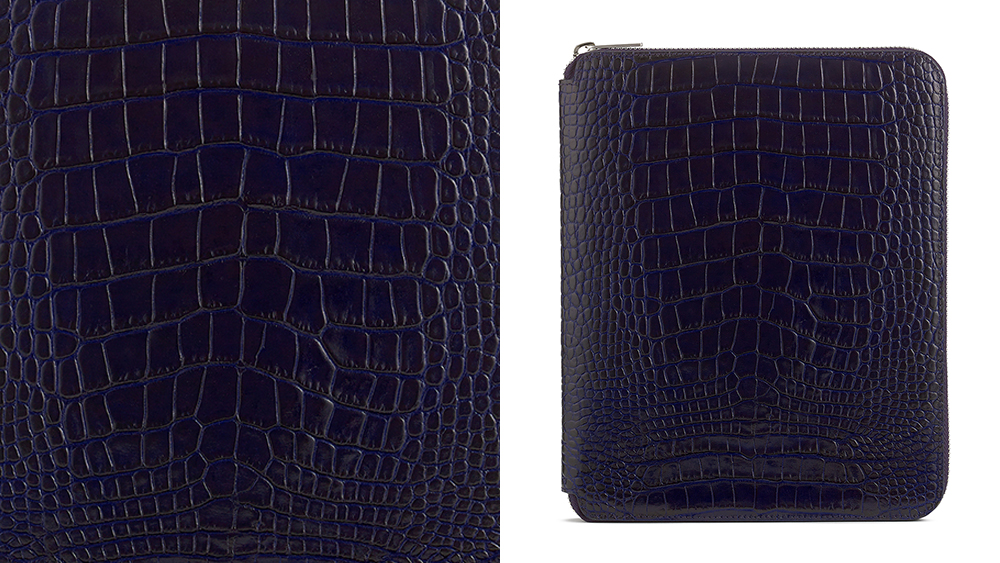 There are plenty of sites—including ours—offering ideas for what to get the guy “who has everything.” If that’s you, and the list of things you genuinely want rather than “could have” is increasingly small, allow me to suggest an upgrade to what you may already use. For me, upgrades to the status quo are often far more satisfying than something wholly new and untested. If you know you already enjoy X then improving your circumstances with X+1 is bound to appeal.

So here’s a recommendation for up-market creatives, lawyers, scriptwriters, cartoonists, insomniacs, compilers of lists, scribblers of limericks and anyone else who rattles through notebooks or finds themselves all-to-regularly scrambling for scraps of paper when a life-changing idea strikes in the middle of the night. Get yourself a world-class piece of writing kit. Enter the Smythson Mara A5 writing folder.

I’ve used Smythson products for many years, starting with a passport holder which is still going strong after 15 years, so I’m comfortable vouching for the quality here. But if this is a new name to you, a quick brand primer. Established in 1887, Smythson is about as London as red buses and bad weather. Frank Smythson opened shop on Bond Street offering what he called “stationery and fancy articles of a high-class character” in the 19th century, and his label has stood for the same ever since. Numerous royal commissions were bestowed, from Queen Victoria’s request that Smythson produce all the stationery for her various residencies, to warrants from Elizabeth II and the rest of the cast of The Crown. Its distinctive blue paper has graced writing pads, diaries and notebooks used by prime ministers, film stars and the generally discerning.

The folder comes in A4 or A5 sizes, but I prefer the smaller version for its portability. There are three options: a buttery soft calf leather, a more robust cross-grained leather and then a calf leather that has been embossed with a crocodile print. This works particularly effectively in navy, as the dye creates a rather subtle but pleasing two-tone effect. Various other colors are available, including some with rather funky designs. Unzip it and you’ll notice the cover of the included Smythson ring-bound notebook slips inside a pocket on the back flap so your pad is held in place. There’s also a pen loop and three slots for cards, as you can see.

But, and this is where it gets suitably nerdy, there’s nothing to stop you customizing your kit––and I don’t mean with your initials on the outside, although Smythson will certainly indulge you if you fancy that, too. I work with two notebooks: a ring-bound one for to-do lists, which allows me to tear off a sheet when full or when all my tasks are completed (which, let’s be honest, hardly ever happens); and a better one for ideas, notes or thoughts I want to capture. (I also use the Simplenote app for a cloud-based digital version, before you think I’m a Luddite.)

So I’ve switched the Smythson notebook that comes with the folder to the front flap, which is designed to hold an iPad Mini, and use its perforated pages for my daily to-dos. For my main pad, I use a coverless A5 unlined Midori MD from Japan in the back flap, as the quality of the beige paper (which I prefer when writing more than a list) is excellent with very little show through, and the book is bound so it can open flat. Due to the potential to hold that iPad, the folder is generous enough to zip up snugly and securely around both pads, so it still looks smart and stylish when placed on my desk or pulled from a bag at board meetings or in front of clients.

This double-pad combination is working well so far, but you could as easily swap the Midori for a regular soft-cover Moleskin, or just roll with the pad it comes with, which is perfectly good. Refills are available at Smythson.com.