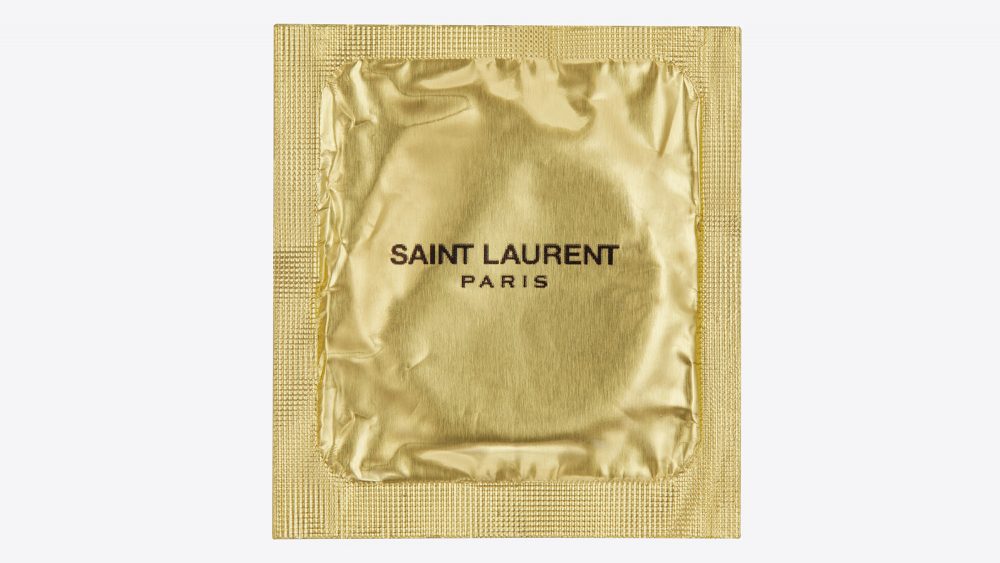 Condoms are usually something one tries to keep discreet. But Saint Laurent is vying to change all of that with a new line of upscale prophylactics for couples who appreciate a little—or big—dose of luxury.

The ultra-chic condoms come packaged in a range of bang-on wrappers, from lewd leopard print to black-and-white racing checks, all of which aim to reduce sheath stigma and encourage safe sex.

Each condom comes “adorned with the Saint Laurent signature” according to the site. They’re 100 percent rubber, 2 inches wide and 2.3 inches high. The best part is, they cost just $2.20 (€2) apiece.

The condoms were rolled out as part of a provocative new campaign “The Love Affair,” which the creative director for the French fashion house, Anthony Vaccarello, announced over the weekend. The post, which featured a racy shot by legendary photographer Juergen Teller, has since been removed by Instagram. Other notable items from the collection include a surfboard emblazoned with a saucy image of Kate Moss for approximately $4,370 (€3,995) and Saint Laurent-branded yoga mats priced at around $370 (€345).

It’s not the first time that the lover’s latex has been given the luxury treatment. In fact, over the past three years, haute condoms have risen up into the mainstream. In 2017, Instagram user mikadololo designed unofficial Off-White condoms as a hot-to-trot homage to the brand. A year later, Alexander Wang released the “Protect Your Wang” capsule and gave away Wang-branded Trojans with every item purchased from the collection. And just a few months ago, Vetements used glossy black rubbers to invite guests to the Spring/Summer 2020 Fashion Week show.

Unfortunately, Saint Laurent’s high-end johnnys and the rest of “The Love Affair” collection are only available at the Parisian concept store, Rive Droite. But if you’re busting to get the safe-sex message out—while wearing some Saint Laurent—the label is currently selling a “Debbie Says Use Condoms” t-shirt for $420.