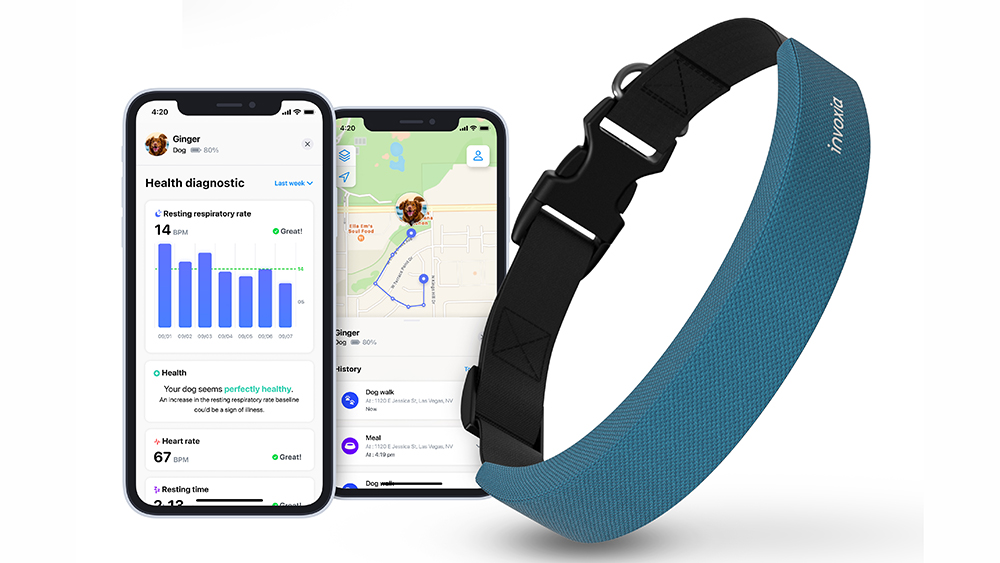 Unless you happen to speak the right dialect of dog, you’re unlikely to know what’s ailing your canine companion—until you take it to the vet. But a new dog collar is aiming to act as a dog-to-human health translator, of sorts.

Created by French electronics company Invoxia, which claims that between 10 to 20 percent of dogs are either at risk or already suffer from difficult to diagnose heart conditions, the Smart Dog Collar debuted at this year’s CES as the first accessory for dogs that allows you to observe their health along with their location. Via the Invoxia GPS app, you’ll find non-invasive measurements of your dog’s heart and respiratory rates, activity levels and sleep quality. A proximity radar will buzz should your pup get away from you in the park, while escape alerts also notify you in real-time if your dog leaves predefined areas.

The secret weapon in the collar is “lost mode,” which can be activated if your dog is ever lost or stolen. It boosts the frequency and accuracy of the collar’s GPS, broadening the range in which it can be tracked. The cutting-edge tech has already won two CES Innovative Awards.

Artificial intelligence and next generation sensors are what make the collar the first of its kind, according to Invoxia. Aside from tracking resting heart and respiratory rates, the pairing can detect your pet’s different behaviors and habits. It also features something called contextual intelligence that uses the best geolocation technology to relay your dog’s surroundings.

The lightweight collar was designed in collaboration with veterinary specialists who’ve also approved the device’s biomarkers for 360-degree protection. The device can also go several weeks before needing a recharge, thanks to that contextual intelligence and the fact that it leverages 4G LTE-M.

The French tech company was founded more than a decade ago and is known for its range of tracking devices for cars and motorbikes. Thousands of vehicles and devices have been recovered to date with the help of its technology, it claims. But is it a match for your cunning canine?

The Smart Dog Collar is slated to arrive in summer 2022. Visit Invoxia.com for more information.