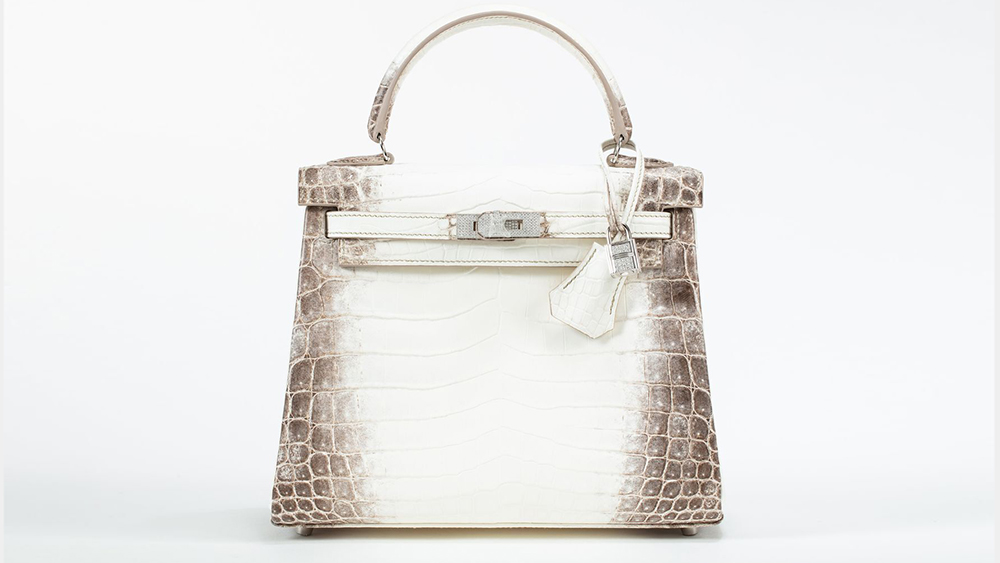 The coveted accessory is made from the house’s highly exclusive Himalaya leather, a hand-painted crocodile with a pattern reminiscent of the snow-capped mountain range. The bag sports 18-karat white-gold hardware with a lock and clasp set with 258 diamonds.

The bag is considered one of the rarest in the world from the prestigious French fashion house. Because of this, it’s become the ultimate status symbol and has been seen on the arms of well-known collectors including Kylie and Kris Jenner.

“Countless variations of the iconic Kelly have also been reinterpreted by different well-renowned designers over the decades, but like their namesake mountain range, the Hermès Kelly Himalayans sit atop the world of handbags,” says Morgane Halimi, head of handbags and luxury at Sotheby’s, in an email to Robb Report. “Due to Hermès’s gradation dyeing process, it should be noted that each bag’s gradation is unique to its own, making it all the more special.”

Beyond being an instantly recognizable and sought-after bag, It’s also a solid investment piece that has continued to grow in value. According to Bag Hunter, a secondary market retailer of collectible bags and accessories, a standard-issue Kelly would set you back about $900 when it was released in the 1950s. Today the same bag sells for over $9,000.

A Sotheby’s representative told Robb Report that they would not release a price for the item. However, the auction house confirmed that it sold a Himalayan Kelly 28 for $513,000 earlier this year.

The Kelly 25’s size is the main factor affecting its high price tag and expectations. It’s smaller than the 28, and according to experts from the auction house, buyers tend to prefer smaller bags, which can increase the overall value of the current listing.

“Our top collectors know we have the ability to find these extremely rare models such as this Kelly 25 Himalaya or other diamond version and we have indeed received a higher number of requests for these very rare models,” says Halimi.

Looks like another item to add to that holiday wish list. Interested parties should get in touch with Cynthia Houlton (cynthia.houlton@sothebys.com) Sotheby’s global head of fashion and accessories, or Morgane Halimi, the house’s head of handbags and accessories (morgane.halimi@sothebys.com) for more information, or to place an order.