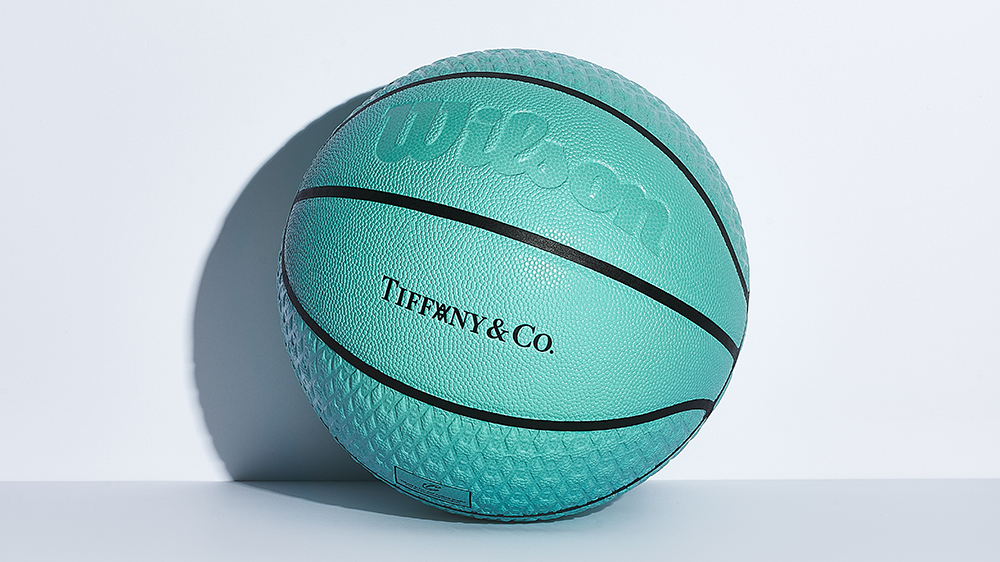 Back in September 2021, Tiffany & Co. revealed a post-apocalyptic take on its iconic Tiffany blue box that was reimagined by contemporary artist Daniel Arsham. The piece, made to appear as if decaying, was the first release from the duo’s partnership and a complete 180 from their next drop. If you’re headed for Cleveland, Ohio, this weekend, you’ll get to see—and maybe even buy—that item firsthand.

In celebration of NBA All-Star Weekend, the American luxury jeweler will offer a limited-edition basketball in Tiffany blue that was designed by Arsham. It will be sold exclusively at a pop-up dubbed “the Tiffany & Co. x Arsham Studio Half Court”, which will be hosted by the Cleveland Cavaliers in the StockX Factory at the May. The ball features a special co-branded logo, as well as a Wilson logo. But what really stands out is the embossed pattern that displays both the Arsham Studio signature “A” monogram and the Cavaliers “C” insignia. Available in limited quantities, the balls will come packaged inside a ribbon-tied Tiffany-blue box and well be sold starting February 18th for $575.

The forthcoming release also commemorates the jeweler’s 160-year legacy of crafting sports trophies. Whether they cop this limited-edition basketball or not, fans can shoot some hoops at the half court pop-up and view Tiffany’s iconic Larry O’Brien Championship Trophy that the Cavs won during the 2016 NBA Finals. The company has created this same sterling silver and 24-karat gold vermeil piece since 1977, and has also designed and handcrafted other celebrated trophies such as the WNBA Championship Trophy and the NBA Finals MVP Bill Russel Trophy.

A close-up look at the co-branded details on the basketball.  Tiffany & Co.

Arsham knows this history of the brand well and considers their partnership a special one. “Tiffany & Co. has created the Larry O’Brien trophy for the NBA for decades. The link between basketball and Tiffany & Co. is clear and well established,” he says in a statement. “As the Creative Director of the Cavs—which is my hometown team as a Clevelander—it’s a special thing to be working with the team and Tiffany & Co., and to have the All-Star game in Cleveland this year.” Arsham, who is represented by the Perrotin gallery in New York, was named the team’s first-ever creative director back in November 2020. Tasked with refreshing the Cavs’ brand identity, Arsham manages its social media accounts, designs team apparel and more, according to ArtNews.com.

This second release from the duo falls more in-line visually with the pristine image associated with the Tiffany & Co. name. For perspective, its most recent collaboration with Patek Philippe, which dropped last December, saw the jeweler’s signature blue used for a Nautilus dial. Though a luxury sport watch, its final design result proved to be an elegant offering that was sold exclusively at Tiffany boutiques.

And don’t fret if you can’t make it to downtown Cleveland for the collaborative drop and pop-up: The limited-edition basketball will also be available from this Friday at Tiffany’s store in Woodmere, Ohio, for $575. Visit the jeweler’s website for more information.