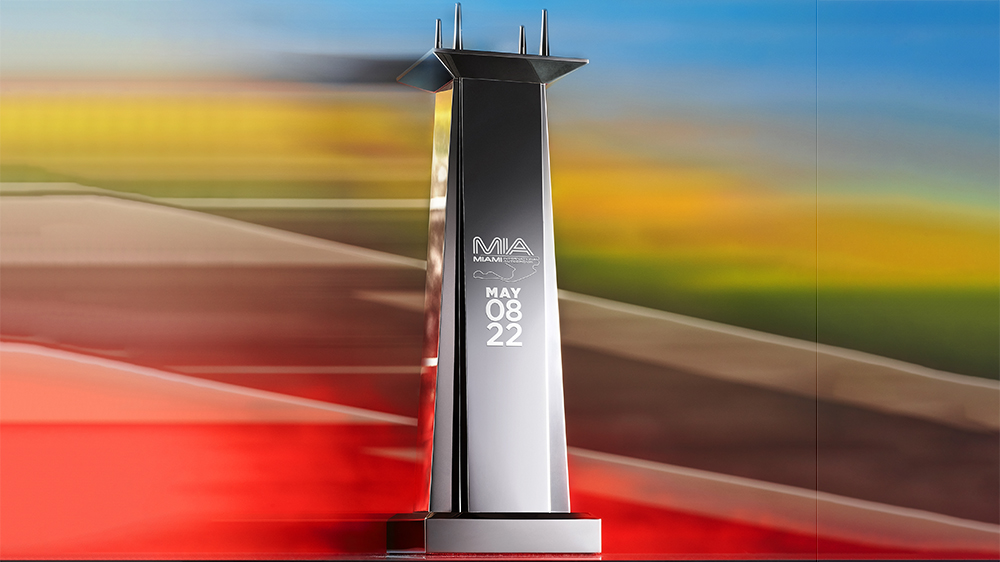 Tiffany & Co. has made the winners of Miami’s inaugural Formula 1 grand prix extra happy this weekend with spectacular new trophies.

The American jeweler, which has been handcrafting sports trophies at its hollowware workshop in Rhode Island for the past 160 years, presented the three drivers on the podium with sleek awards to immortalize the victory. Sunday’s race saw Red Bull’s Max Verstappen score first place, while Ferrari’s Charles Leclerc and Carlos Sainz came in second and third place, respectively.

Verstappen’s coveted first-place trophy rightly stands out among the rest. Tipping the scales at 11.5 pounds, the sterling silver rarity features a modern, streamlined silhouette and towers nearly two feet. The race details have been hand-engraved on the center just in case the Dutch driver needs to be reminded of the details of his win. Naturally, the trophy also comes housed in a stylish presentation box colored in the signature Tiffany blue hue.

Using time-honored techniques, from silversmithing to polishing, Tiffany’s master craftspeople spent around three months on each trophy. In fact, each prize reportedly took 65 hours of work to complete. In addition to forging trophies for the top three F1 racers, the jeweler also designed one for the winning team.

Tiffany made its first trophy, the Woodlawn Vase, back in 1860 for the winner of the Preakness Stakes in Baltimore. (The ornate cup, which is still presented annually, is now estimated to be worth $4 million.) Since then, the house has created trophies for the Super Bowl, PGA Tour, US Open and more.

Today, Tiffany produces around 65 trophies each year. It’s even started to have a little fun with the designs. In April, the jeweler released the “Ultimate Participation Award” with mischievous art collective MSCHF to poke fun at the most modest prize of all. The 100 tongue-in-cheek trophies, which were priced at $1,000 apiece, have since been snapped up by collectors—who did very little to merit them. The same cannot be said about Verstappen, who fought tooth and nail for this trophy. Enjoy, Max.