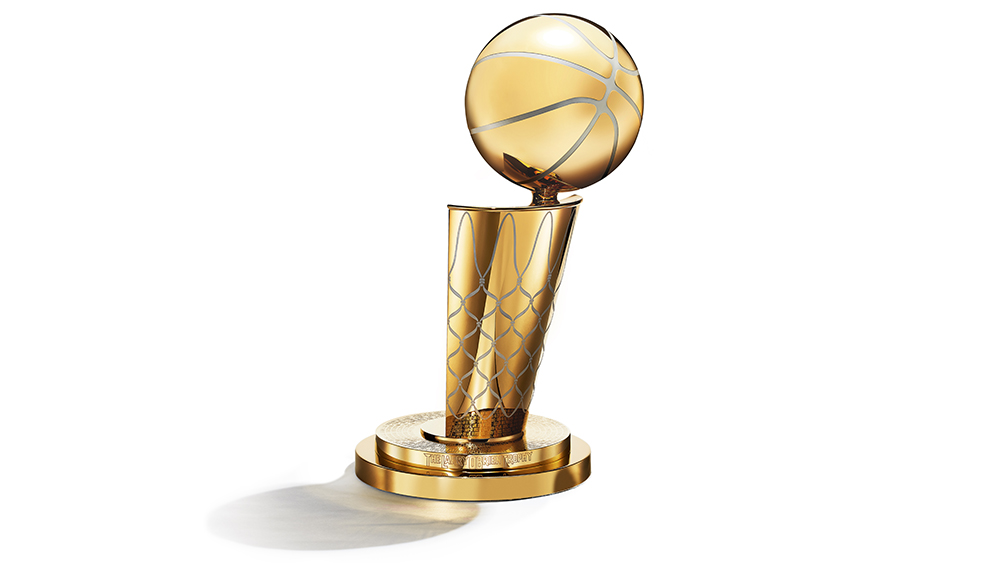 Tiffany & Co. has created a slam dunk of a trophy for the victors of this year’s NBA Finals.

As much of Solomon’s work has been about celebrating basketball, the collab is a natural fit. So too is the partnership between the NBA and Tiffany. The luxury titan, which has been handcrafting trophies at its hollowware workshop in Rhode Island for the past 160 years, has been supplying the NBA glitzy grails for nearly half a century. As the lineup of new annual trophies shows, though, it’s good to keep things fresh.

Designed and manufactured by Tiffany from the very beginning, the league’s championship trophy was first awarded in 1977. It was originally called the Walter A. Brown Trophy after the basketball pioneer, before the name was changed in 1984 to honor then NBA commissioner Larry O’Brien. The new iteration, which stands 25.5 inches tall and weighs approximately 29 pounds, sports the same silhouette as the original but the famous ball and net have been repositioned more prominently. Using a mix of sterling silver and 24-karat gold vermeil, the artisans have managed to create more precise detailing on the trophy. The basketball seams and net, for instance, feature contrast plating to further highlight the intricate patterns.

Solomon, who worked on the line for two years with the NBA and then refined it further with Tiffany, told Robb Report his favorite element of the new Larry O’Brien Trophy is the two-part cylindrical base that honors the past while welcoming the future.

“On the surface of the top layer, we’ve etched all previous championship-winning teams and corresponding years and the second layer has open real estate to etch the next 25 champions—designed to take us up to the 100th anniversary of the league,” the artist said via email.

The work didn’t stop there, either. The MVP award, named after legendary baller Bill Russell since 2009, has also been revamped and finished in the same gold vermeil to showcase the intricacies. The team also created two new Conference Championship Trophies titled after NBA heavyweights Bob Cousy and Oscar Robertson, along with two Conference Finals MVP Trophies named in honor of Larry Bird and Earvin “Magic” Johnson. All pieces share a cohesive design language that Solomon says was inspired by the past 75 years of the NBA.

“No one else has ever attempted a holistic overhaul like this before and think the full family of honors we’ve created incorporates a lineage to the great’s past, creative innovation and considered storytelling like never before,” the artist adds.

Now we just have to wait and see who wins them.