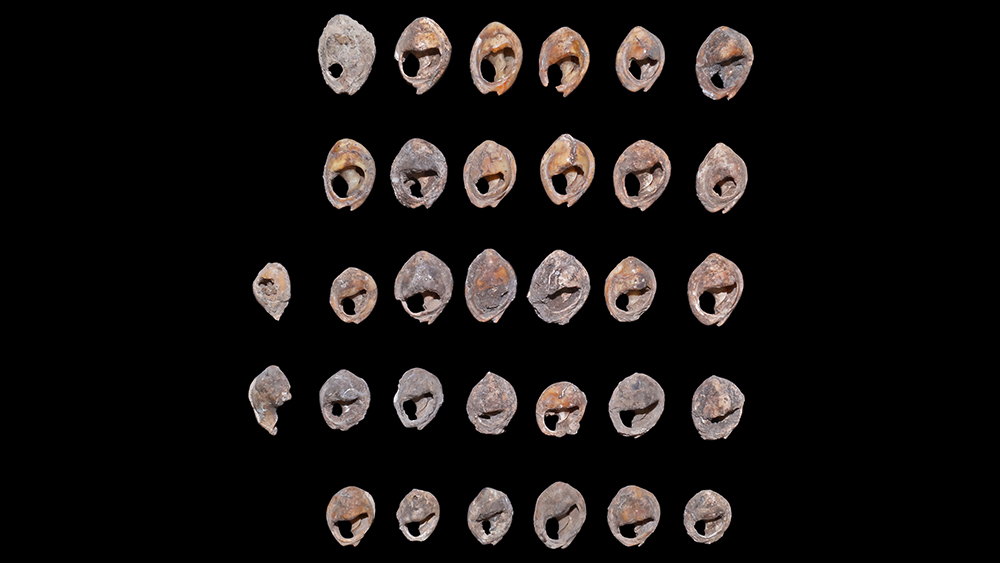 Turns out, beaded jewelry is no fleeting trend.

Archaeologists have unearthed what is likely to be the oldest piece of jewelry on record, and it happens to be 33 shell beads that date back 150,000 years. The incredible find, which was outlined in a research article published by Science Advances in September, gives an insight into human communication, too.

The artifacts, which were discovered in the Bizmoune Cave near Morocco’s Atlantic coast between 2014 and 2018, have been through a series of rigorous tests to determine the age of shells and the surrounding sediment. Many of the beads are said to be between 142,000 and 150,000 years old.

Spanning roughly half an inch long, each bead was made from the shells of two different sea snail species. According to the excavation team, the holes in the center of each bead as well as the markings from wear and tear indicate that they were hung on strings or from clothing. Ancient beads from North Africa, such as these 33, are associated with the Aterian culture of the Middle Stone Age. These ancient settlers are widely considered to be the first to have worn what we now call jewelry.

The archaeologists recovered the 33 beads from a cave in western Morocco.  Courtesy of Steven L. Kuhn

Archaeologist Steven L. Kuhn and his team say the shell beads are the earliest known evidence of a widespread form of non-verbal human communication—that is, using jewelry to relay things about ourselves without the fuss of conversation

“They were probably part of the way people expressed their identity with their clothing,” Kuhn said in a statement. “They’re the tip of the iceberg for that kind of human trait.”

Kuhn, who also works as a professor of anthropology at the University of Arizona, believes the discovery shows that people used accessories to convey parts of their personality even hundreds of thousands of years ago. The beads, Kuhn said, are essentially a fossilized form of basic communication.

The news comes shortly after a 23,000-year-old bead, which has been labeled the world’s oldest known piece of colored jewelry, was put on display in Japan.