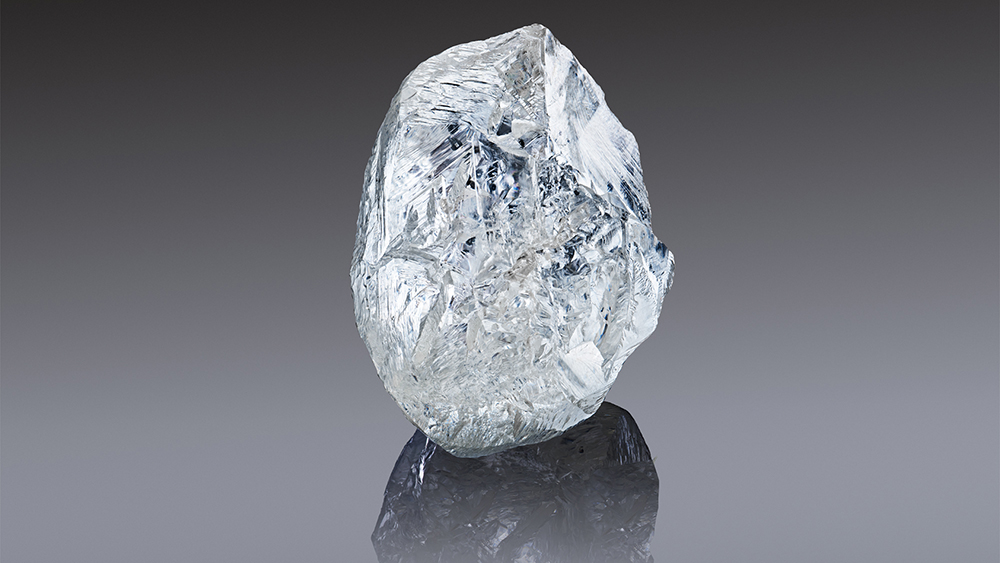 There are diamonds and then there are giant, glittering stones that have the power to move small fortunes. One lucky company is about to rediscover the difference.

Leading diamond producer Alrosa has unearthed a gem-quality stone weighing in at a whopping 242 carats, and it’s going up for grabs. The company, which is partially owned by the Russian government, announced on Friday that the impressive ice will lead the Jubilee Auction in Dubai on March 22. Bidding will start at a cool $2 million.

The crystal-clear rough diamond measures 21.7 by 31.3 by 41.9 mm—about the same size as a golf ball. It’s one of the biggest such crystals to be mined by the group since 2000, and Alrosa hasn’t offered a stone of such proportions at open auction in half a decade.

The 242-carat rough diamond is about the size of a golf ball.  Alrosa

“Rough diamonds, which potentially allow for cutting a diamond larger than 100 carats, are extremely rare in nature,” Alrosa’s head of sales, Evgeny Agureev, said in a statement. “Even less often such gems are traded.”

For context, all rough diamonds larger than 50 carats that are mined in Russia are legally required to undergo a state examination and must be offered to the Gokhran state repository first before they can be auctioned.

Bids for the giant gem will start at $2 million.  Alrosa

If the Alrosa name looks familiar that’s because it happens to be the world’s largest producer of rough diamonds and has made some incredible discoveries since it was founded in 1992. In fact, just last year, the group unearthed the world’s first diamond within a diamond. Weighing in at just .62 carats, the bedazzling anomaly was dubbed the Matryoshka after its Russian doll-type structure.

In addition to the heavyweight headliner, Alrosa’s 100th international auction features a score of other super-sized rocks, including two outstanding diamonds that tip the scale at 191 and 136 carats, respectively. If that trio is too big (or pricey), there’s also a bunch of notable bling totaling more than 10 carats each.

Alrosa last offered a rock of such proportions at open auction five years ago.  Alrosa

Viewings for the Jubilee Auction will be held at the Alrosa sales office in Dubai from March 14. Get those paddles ready, folks.