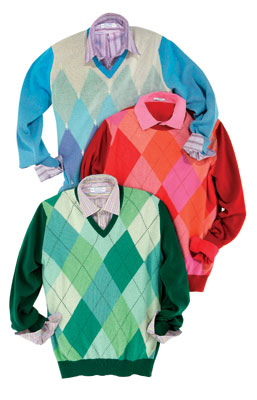 Ever since Gucci and Burberry recaptured and then eclipsed their former glories, countless other fashion brands have attempted comebacks. Next spring, the Scottish cashmere firm Ballantyne will seek to join the ranks of the rejuvenated. The label, founded in 1921, gained prominence during the 1950s and ’60s with its brightly colored hand-knit intarsia sweaters, but recently its presence in the United States had dwindled.

Ballantyne is now under the direction of chairman Alfredo Canessa and creative director Massimo Alba, whose last collaboration was the hugely successful Malo cashmere brand, which Canessa founded in 1973 and sold to the Italian company Ittieri in 1999. The partners acquired Ballantyne in 2004 with the goal of expanding the firm’s offerings beyond classic sweaters to include tailored clothing, woven shirts, casual slacks, polos, neckwear, and even footwear—all of which will display the brand’s exuberant color palette and its signature diamond pattern, just as Burberry incorporates the tartan into its designs. Such a monumental undertaking might seem dubious if it were not backed by Charme Investments, an Italian private equity fund primarily financed by entrepreneurs Luca di Montezemolo (of Fiat and Maserati), Diego della Valle (of the fashion brand Tod’s), and Johann Rupert (of the luxury brand conglomerate Richemont).

“The idea is to maintain the history and cult status of the brand, which is one of the oldest in Scotland, and especially to continue the art of handmade intarsias,” says Canessa. At the same time, Canessa must reestablish the Ballantyne name. That process will come to fruition this spring, when Neiman Marcus and Saks Fifth Avenue start carrying a full line of Ballantyne apparel. Canessa’s eventual plans call for a string of Ballantyne shops worldwide.