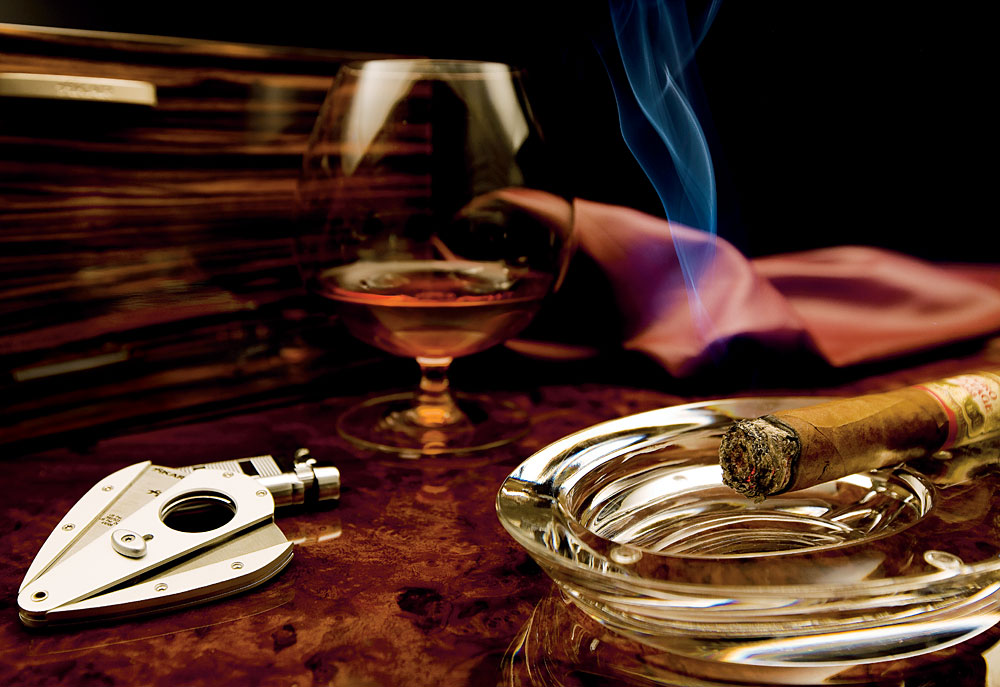 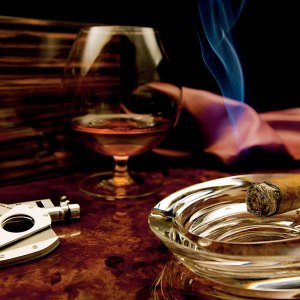 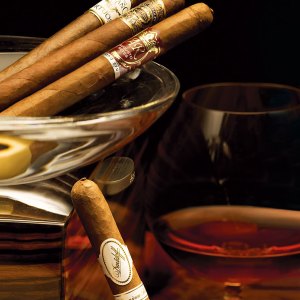 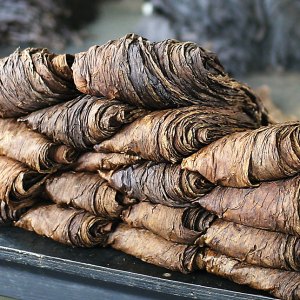 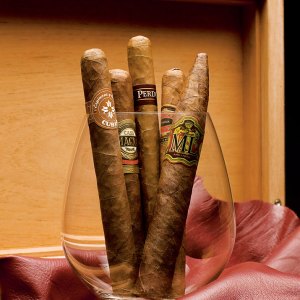 The fancies of high-fashion designers—as expressed in the creations that populate the runways of Paris, Milan, and New York—represent more than simply the latest in practical protection from the elements; they are social snapshots that capture the cultural mood of the moment. Simplicity might reign one season, complexity the next.

Although cigar making ranks among the world’s most traditional industries, it too is subject to the whims of fashion. Cigar sizes, shapes, and blends that were all the rage only five years ago sometimes sit untouched in their owners’ humidors, while those that smokers once shunned achieve sudden popularity. Our holiday list looks at a few of these tobacco trends, offering Robb Report readers a well-rounded selection of enticingly au courant cigars. Whichever fad you favor—longer or shorter, stronger or milder—these stylish stogies will dress up any humidor during the holidays.

The lancero cigar takes its name from the long, thin spears—or lances—used by 17th- and 18th-century Spanish cavalry. Its slender form ranges between a 34- and 47-ring gauge (the diameter of a cigar is measured in rings, each of which is 1/64 of an inch), making it essentially an elongated panatela. The lancero is extremely difficult to roll, as a number of filler leaves must be packed into its relatively tight space without hindering its draw. A carefully proportioned blend is critical to the quality of the lancero because its shape concentrates the smoke and, consequently, the tobacco’s flavors, as the cigar burns.

Since the 1930s—when the Fifth Earl of Lonsdale, Hugh Cecil Lowther, commissioned the Rafael Gonzalez factory in Havana to create a special 6¼-inch x 42-ring lancero shape, known as the Lonsdale, exclusively for him—the lancero has been the subject of some confusion. The names lancero and Lonsdale are often considered interchangeable, when, in fact, they identify two distinct categories of cigar shape.

One of the most elegant of the lanceros is the 7¼ x 40 Davidoff Millennium Lancero ($17.50). The hybrid Connecticut-seed Ecuadoran wrapper and aged Dominican filler combine to produce a sturdy, sourdough-bread flavor that leaves a lingering sweetness. The all-Dominican 6½ x 40 Augusto Reyes Grand Cru Lancero ($6) has leathery overtones tamed by a creamy mildness. The broadleaf-wrapped maduro version of the Grand Cru ($6) introduces underlying suggestions of chocolate to? ?the smoke.

With its Honduran Criollo wrapper and Dominican filler and binder, the 5¾ x 40 Fonseca Cubano Viso Fuerte Petit Lancero ($6) is a muscular smoke, as is the meaty 7½ x 41 Alec Bradley Tempus Creo ($8). In fact, we find the latter to be the most powerful of all the lanceros we have smoked, yet it is also the smoothest-drawing.

Although the 7½ x 38 Toraño Virtuoso Baton ($7) was a little too tightly wrapped (a common defect among thinner cigars), its dark, oily Nicaraguan wrapper and Nicaraguan and Honduran filler yielded a fruity, wet-bark richness that demonstrates just how much complexity can be packed into these slight yet sophisticated cigars.

Pushing the limits of strength is one of the most prominent trends among tobacco growers. Powerful flavors, if wisely managed, can please the palate immeasurably. Yet achieving the ideal flavor intensity is, paradoxically, delicate work. Growers must gauge the potency of the uppermost primings of the tobacco plant and carefully assay just how much ligero (the fullest-flavored of these leaves) will deliver the perfect balance of power.

One of the masters of this craft is Cuban-trained José “Pepin” Garcia, whose Tabacalera Cubana factory in Nicaragua has created the Cubao ($6–$8) for United Tobacco. Packed in a rough-hewn cedar box that evokes the rugged, punch-in-the-face taste of the smokes inside, this cigar produces a first puff that is surprisingly mild. But, as the Ecuadoran Sumatra wrapper kicks in, followed by the Nicaraguan filler and binder, the smoker quickly realizes the Cubao is anything but tame.

In contrast, the Savinelli R&R (Rich & Rare) Series Y ($6.50–$7.25) is one of those “strong” cigars that actually mellows as it is smoked. Though purported to be the strongest cigar yet from this producer, the Series Y emits pleasant sweet-wheat and spicy-mustard flavors, despite a leathery Ecuadoran Habano wrapper and the presence of Nicaraguan ligero in the filler.

Slightly higher on the strength scale, the Montecristo Reserva Negra ($7.50–$12) is encased in a luxurious San Andres Morrón maduro wrapper that lends it a rich, satisfying cocoa flavor. With its deep brown, silky sheen (unusual for Mexican leaf), this cigar provides an ultrasmooth and subtle smoking experience.

The Rocky Patel Renaissance ($7–$8) produces a honeyed smoke that combines a hint of toasted cornflakes with a sprinkling of Italian spice—strong but not off-putting. Its deeply tanned Sumatra wrapper makes this a very complex cigar. Complexity also defines the Perdomo Patriarch ($6–$9), which releases its full, pungent aroma the moment the cellophane is removed, evoking flavors of lemongrass, cedar, and mild leather. Created by Nick Perdomo Jr. to honor his late father, this well-aged, all-Nicaraguan puro composed of Perdomo Sr.’s favorite tobaccos is available in both maduro and Corojo wrappers. “I made this cigar for my father,” says Perdomo, “so it’s the best we’ve got.”

Casa Magna ($5.50–?$6.25), an elegantly flavored puro, is packed with tobaccos from all three Nicaraguan growing regions: Estelí, Condega, and Jalapa. Rolled by the skilled torcedores of Nestor Plasencia’s famed Segovia Cigar factory in Estelí, this cigar uses filler and binder composed of only the finest Cuban-seed ligero and viso tobaccos, which are then wrapped in a specially cured ligero wrapper. The result yields a highly refined mosaic of white flour, green tea, and cedar flavors—the perfect accompaniment to a Kobe steak and single-malt scotch.

The Arganese ML3 ($5–$6), on the other hand, is better suited to a charred New York strip and bourbon. The ML3 (which stands for “Maduro Ligero to the Third Power”) is a strong, rugged-tasting cigar made of Dominican maduro ligero filler and binder in a coarse, oily Brazilian maduro wrapper.

A gentler take on today’s muscle cigars, the Garo La Preferencia ($12–$15) is a powerhouse of Nicaraguan tobacco from Garo Habano Fine Cigars, a premium brand long associated with mild-to-medium Dominican blends. “My Russian distributor wanted something similar to Cuban cigars but more refined, with a smoother character and easier to smoke,” says Garo Bouldoukian, the cigar’s creator. Pairing 8-year-old Nicaraguan tobaccos for the filler and wrapper with a Honduran Habano 2000 binder for a touch of spice, this cigar delivers a firm yet refined message—much like a seasoned diplomat. Extremely popular in Eastern Europe as well as the United States, La Preferencia does indeed exhibit an international show of strength.

Decades ago, most cigars were rolled near the fields where their tobacco was grown. Thus, puros—cigars made entirely of tobacco from a single country—were common. Today, most master blenders have diversified their sources of supply, using tobaccos from two, three, or four countries in a single cigar to create new tastes and fine-tune their blends. Puros are relatively uncommon now—and puros from the Dominican Republic are rarer still, because wrapper leaves were not grown there commercially until the early 1990s.

Those first efforts at producing a Dominican puro resulted in the Fuente Fuente OpusX, one of the world’s most venerable cigars. Companies such as Davidoff and Arganese have since followed Fuente’s example in offering puros from the Dominican Republic. This fall, the number of Dominican puros has at least doubled with the introduction of these four cigars.

The Cohiba Puro Dominicana ($14–$21) represents the first Dominican puro from cigar conglomerate General Cigar, maker of Partagas, Macanudo, Hoyo de Monterrey, and many other well-known brands. The Puro Dominicana is the most powerful of the many impressive blends General Cigar has introduced this year—and, in our opinion, the best. Its perfectly balanced blend produces an earthy taste with a fresh, floral nose.

Although its band is simple, the Felipe Gregorio Petrus Prestige ($4–$6), which comes in four sizes, produces a complex, fascinating flavor. Its leaves are grown in the Dominican Republic, but the seed for the wrapper tobacco comes from Cuba’s Vuelta Abajo region, known to cigar enthusiasts as the source of the world’s finest wrappers. The Petrus Prestige’s blend is very well balanced and smooth—an impressive accomplishment given that the company limited itself to tobacco from a single country.

The La Aurora Puro Vintage 2003 ($25), with its salomon shape, is not only the most distinctive-looking Dominican puro; it is also one of the rarest. La Aurora will roll a mere 12,000 of these outsize 7½-inch perfectos, made entirely from tobacco grown in 2003. The Puro Vintage’s soft, velvety taste and subtle spiciness make it our favorite of La Aurora’s many excellent cigars.

The challenge of creating a Dominican puro also inspired Altadis master blender José Seijas to fashion one of his best cigars. At first, the Altadis Mi Dominicana ($8–$9) exudes the intensity of the storied OpusX, but it soon settles down into a more accessible, incredibly smooth smoke.

THE VIRTUE OF BREVITY

In recent years, many municipalities have enacted strict smoking regulations, making it difficult to light up in places such as restaurants and parks, and even on public sidewalks. The scarcity of smoke-friendly venues often requires cigar enthusiasts to cut short their favorite indulgence—hence the growing popularity of small cigars.

The most visually dramatic example of this trend is Nub by Oliva ($4–$7), a line of stout cigars that measure no more than 4 inches. The Nubs, which come in ring sizes from 56 to 66, deliver a surprisingly cool smoke. Oliva wraps the Nub in one of three leaves: Cameroon, Connecticut, or Nicaragua-grown Habano. Our favorite is the Cameroon, whose sweet, smooth character comes through even over the rather heavy filler tobacco.

The Fuente Fuente OpusX Love Story matches the 4½-inch length and double-tapered perfecto shape of the Hemingway Short Story, yet wears the OpusX brand, perhaps the most coveted non-Cuban marque. The Love Story tastes intense and spicy without sacrificing its overall elegance and smoothness. The smaller size makes this somewhat heavy smoke the most accessible, easy-to-enjoy OpusX to date.

Graycliff has perhaps embraced the small-cigar concept with the greatest enthusiasm. A 4½ x 46 torpedo, the Graycliff Piccolo comes in three blends: the smooth, sweet Professionale ($9), the medium-bodied Chateau Grand Cru ($10), and the powerful Espresso ($11).

Many veteran smokers consider the robusto size (usually 4½ x 50) their favorite. Its girth delivers a cool smoke stream, while its relatively brief burn time makes it more practical than a Churchill. Robusto fans may gravitate to smaller variants of the size when their smoking time is restricted to half an hour or less. The Connecticut wrapper of the Avo XO Presto ($6) conceals Dominican filler and binder leaves, delivering a mild, satisfying short smoke. At 3¾ x 43, the cigar could be considered a petit perfecto. The 4 x 50 Paul Garmirian PG Soirée Torito ($8) has the girth of a robusto but is a bit shorter. Its blend is heartier than those for which the brand is known, yet just as refined.

Many small cigars are sealed in a tin for easy carrying, but most manufacturers package only light blends in this manner. Padrón Cigars, however, grows no light tobacco on its Nicaraguan farms, so the 4¼ x 35 Padrón Corticos ($17 for a tin of six) exudes all the power and intensity of the company’s larger cigars. Padrón offers natural and maduro versions.