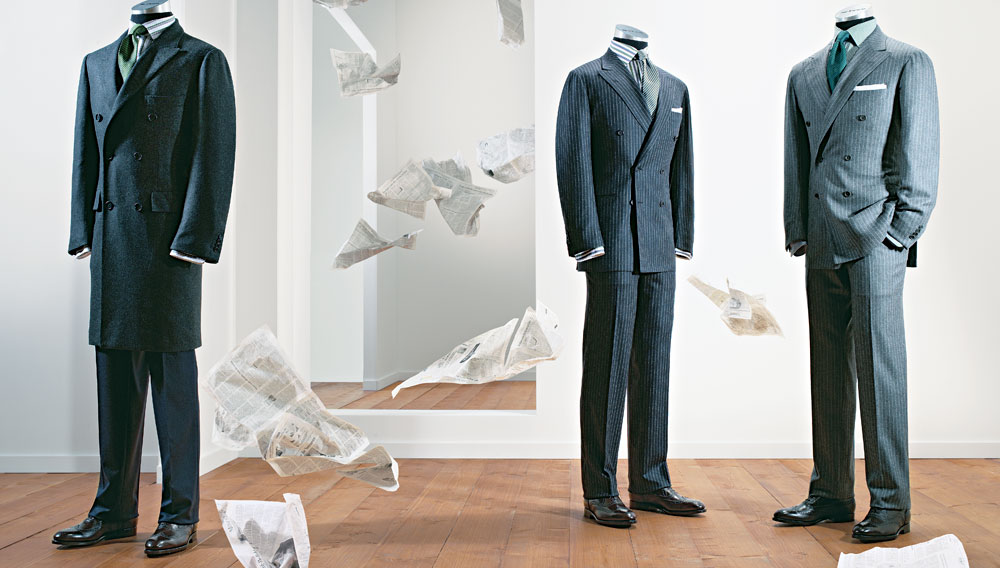 Starting at $500,000, depending on choice of fabrics and details

Since Kiton was founded by Ciro Paone in 1956, the southern Italian suitmaker has commissioned rare and exclusive fabrics from the world’s most storied textile mills, including Lanificio Carlo Barbera in the Piedmont region of northern Italy. Located beside a river high in the hills of Biella near the Swiss Alps, the 165-year-old stone mill is a throwback to an era when textiles were still made on wooden looms (occasionally they still are). It contains the mill town’s only underground cavern, allowing calcium-free mountain water to divert from the river to the factory, where it is used to cleanse and finish Barbera’s pillowy cashmere and superfine wools. When Kiton acquired the legendary mill last year, the Neapolitan clothier known for producing all of its suits by hand—a 50-hour labor of love for the most arduous custom-made variety—also gained access to one of Italy’s richest archives of fabrics, some limited to as little as 1 meter and some considered among the finest and rarest in the world.

Now, for the first time, Kiton is opening the vaults of the Barbera mill to a Robb Report reader, allowing the choice from a trove of historic cloths in order to produce the ultimate modern wardrobe. More than 50 pieces will be produced by hand, from suits to shoes—made from Barbera’s exceptional cashmeres and vicuña, as well as fine leathers and crocodile—with the guidance of Kiton’s president, Antonio De Matteis.

The journey starts in Biella, an hour outside of Milan, where De Matteis will lead the recipient and a guest through the complexities of textile design. In addition to unfettered access to the private Barbera fabric archives, the recipient will have the opportunity to work with the mill’s textile designers to create his own signature cloth, complete with his name woven into the selvage edges and later visible inside the finished suit jacket. “The beauty of owning our own textile mill is, we can allow the client to create as little as 2 to 4 meters of his own cloth, enough for a single suit bearing his name,” De Matteis says.

While northern Italy is regarded for its textiles, southern Italy’s tailoring prowess is second to none. That is particularly true in Naples, where Kiton is based, and where the word handmade is the hallmark of everything, from the shirts, suits, neckwear, and footwear produced by local artisans to the toothsome pasta and aromatic limoncello served nightly. Here the journey will continue, as the recipient and a guest travel with De Matteis to the company’s elegant palazzo-style factory, furnished with 18th-century antiques and an early-20th-century art collection. The recipient will be given a grand tour by De Matteis and a private consultation with Silverio Paone, Kiton’s master tailor. Paone will personally take the recipient’s measurements, assess his lifestyle and clothing needs, and assist in assembling a one-of-a-kind wardrobe. When the collection is complete, it will be hand-delivered, packed in a customized set of crocodile luggage with the owner’s signature monogrammed in gold.

And then the journey truly begins.