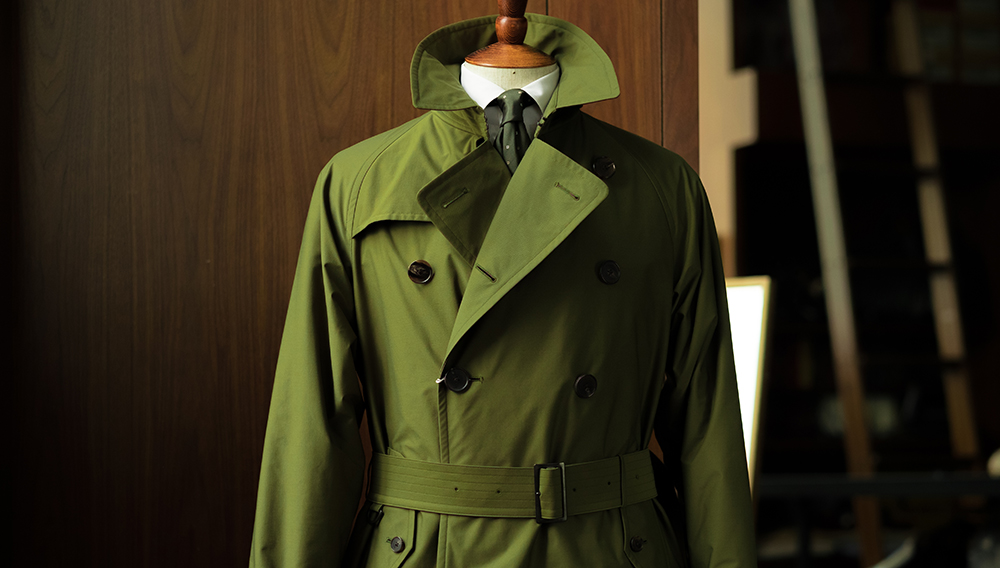 While the roots of the raincoat can be traced back to ancient history—from China’s straw rain capes during the Zhou Dynasty to the protective tree-rubber clothes made by the natives of the Amazon rainforest in 1200 A.D.—the slicker that we know today actually originated in 19th-century Scotland. In 1823, a Glasgow-based British chemist named Charles Macintosh patented a fabric that incorporated diluted natural rubber between two layers of cloth, rendering it waterproof. (Many believe that Macintosh stole the recipe from James Syme, a Scottish surgeon with a passion for chemistry who is said to have initially discovered the technique.) The invention quickly became a game-changer for the raincoat, and the garment—which has since become a staple of every man’s wardrobe—is still evolving today. As you prepare for the inevitable spring rain ahead, we share the three international luxury labels that are honoring the raincoat’s past and pushing it into the future.

The mackintosh, which takes its name from the chemist, was reimagined in 1879 when Thomas Burberry—the English outfitter and founding owner of the fashion house Burberry—developed gabardine, a tightly woven waterproof cotton-and-wool fabric that he soon thereafter patented. Popularity of his gabardine raincoat grew quickly, so much so that the entrepreneur was asked by the British Army to outfit its soldiers with the coat during WWI, so long as he added D-rings and shoulder straps. Since then, the Burberry trench coat has become an international fashion icon, and the London-based label keeps its history carefully woven into its offerings. Case in point: the brand’s latest line of raincoats crafted in tropical gabardine, a warm-weather counterpart to the original fabric, also created by Burberry himself. The new collection includes a lightweight tropical gabardine cotton trench coat ($2,395) that features a storm shield and wind guard. (burberry.com)

Determined to reinterpret the raincoat with Italian expressions of craftsmanship and style, the upmarket outerwear label Sealup was founded in 1935 and stayed under the radar until the early 1960s, when first lady Jacqueline Kennedy donned an ivory-and-brown Sealup raincoat and popularized the brand. Still, it wasn’t until the late 20th century that the Milanese company found its true niche: fashion technology. Since then, the brand has refocused its attention to researching the most innovative and cutting-edge methods to handcraft highly functional garments, and in the process developed such revolutionary processes as “thermoadhesivate,” a method that ensures perfectly sealed seams in fabric, making it rainproof and windproof and still stylish. The newest men’s collection continues to apply the brand’s innovative discoveries in dressy yet practical designs like the rubberized cotton-canvas Marco Polo raincoat(about $835) and the bonded-microfiber hooded parka (about $1,065). (sealup.net)

For those who want authentically old-fashioned silhouettes that incorporate technical modernity, the inspired designs of the Japanese label Cohérence are just right for you. Available for purchase at the Armoury in Manhattan, New York, the men’s coats from the young brand merge the best of both worlds. Each design is inspired by some of history’s most legendary luminaries, but sartorially handcrafted in Japan from modern, in-house fabrics like twill jersey and microfiber. Popular styles include a replica of Albert Camus’s trench dubbed the Al ($1,750), while the newest debuts include the Sid ($1,425), which takes its shape after the slicker that jazz saxophonist and composer Sidney Bechet wore, and the Antoine ($1,275), whose design is that of writer, poet, and aviator Antoine de Saint-Exupéry’s raincoat. (co-herence.jp, available at the Armoury, thearmoury.com)