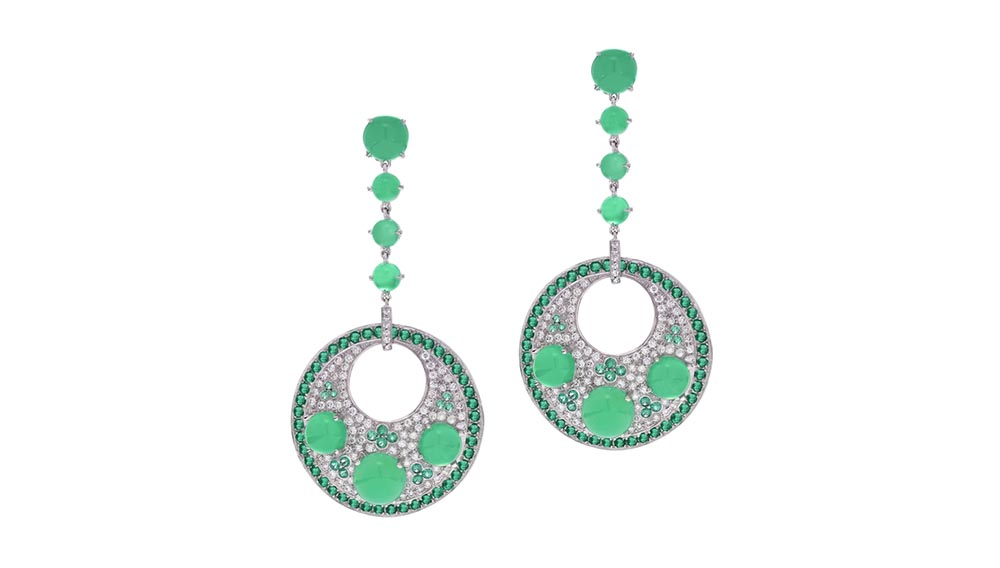 The Circle of Life Earrings by Abellán New York

The circle is a universal symbol with many interpretations and meanings. It represents the idea of totality, wholeness, eternity, timelessness, and all cyclic movement. The circle is the symbol for infinity, because the circle is endless. Circles are sometimes used as sun symbols by cultures including Native Americans, and the symbol is often used to represent gold, which is strongly associated with the sun. The concept of the circle has also led to lore about magic rings. The Koran says Solomon had a magic ring which could give him power over enemies and transported him to a celestial sphere where he could rest from his worries. Romans wore rings dedicated to the goddess Salus which were engraved with a pentagram and a coiled snake to ensure good fortune.

Master jewelry artist Abellan chose the symbols of circles within a circle to create her timeless one-of-a-kind ear pendants. She set them with the unusual pairing of chyrsoprase and emeralds as green is the color of life, renewal and energy—in complete compatibility with the circle symbol.

“We are thrilled to showcase our creations at Moda Operandi during the London Fashion Week in its exclusive VIP location on West London’s Belgravia neighborhood. It is my personal belief that a jewel’s worth is measured by the emotions it arouses. Moda Operandi is the ideal environment to make my jewelry available to an audience that will feel that emotion,” says Abellán, the Artist behind Abellán New York.

Abellán signs each of her original creations, which are hand crafted in New York City.