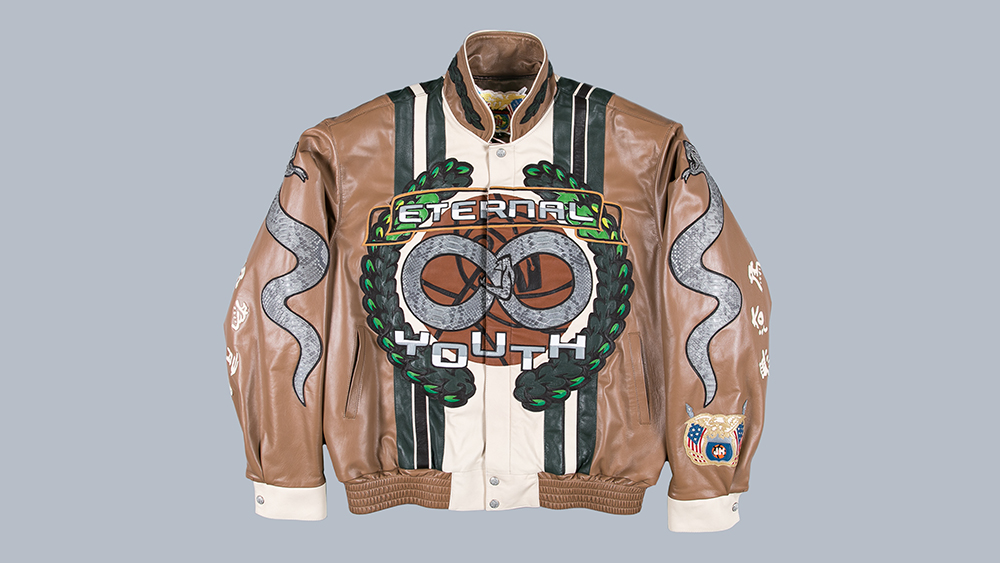 One year after his passing, Kobe Bryant is receiving a novel but fitting tribute in the form of a letterman jacket created by Los Angeles-based streetwear brand Advisory Board Crystals in collaboration with artist Jonas Wood and NBA-favorite designer Jeff Hamilton. This one-of-a-kind piece is literally priceless: it’s set to be given away via the label’s Instagram the first week in February.

The jacket’s striking design is brimming with symbolism. The front features a basketball painted by Wood, set behind a snake forming the infinity sign and a pair of laurels with the words “Eternal Youth.” On its back, the basketball is replaced by a yin-yang symbol below Kobe’s jersey number, 24, and bordered by the word “Immortal” and a quote from Bruce Lee: “The key to immortality is first living a life worth remembering.”

According to Advisory Board Crystals designer Remington Guest, the Bruce Lee-inspired imagery and quote touches on the philosophical connection between the two greats.

“Kobe looked up to Bruce Lee. He was a major inspiration to Kobe. I’m attracted to the idea of the two together,” Guest says, “it moves the story away from basketball and into something more ethereal—a mindset.”

The style of the jacket itself is a throwback to the swaggering creations Jeff Hamilton produced for the NBA stars of the ‘90s and early aughts. His commemorative jackets were a sartorial badge of honor, worn by such greats as Magic Johnson and Michael Jordan. Hamilton famously presented the 2002 Lakers with jackets featuring palm trees and the L.A. skyline to celebrate their three-peat championship streak, outfitting Bryant in the process.

That Bryant proudly wore Hamilton’s jackets to mark several career milestones makes this collaboration particularly poignant. But what inspired Advisory Board Crystals to make it happen? Like millions of others, Guest felt a kinship with the late star by watching his game.

“When Kobe entered the league, I was transfixed by his talent. Kobe is bigger than basketball. And for whatever reason, I felt deeply connected to him,” he says. “Part of what’s exciting about having ABC is the ability to work with people and brands you’ve always admired. While I never got the opportunity to do that directly with Kobe, in my mind the next closest thing was working with Jeff. It allowed me to create a wearable tribute with someone who Kobe knew and whose work he greatly admired.”

Guest says the decision to give the jacket away over social media is another tribute to Bryant, who participated in many unpublicized acts of kindness. To win the jacket, entrants must follow @advisoryboardcrystals on Instagram, tag a friend and perform a “random act of kindness,” the proof of which must be emailed to studio@advisoryboardcrystals.com by February 1. The winner will be announced on Friday, February 5.

“Now more than ever the world needs more acts of kindness with no motive. If we can be a part of an increase in kindness even for a few weeks, that’s pretty incredible,” he says. “We didn’t want this to be something anyone profited on. We changed the currency to kindness.”