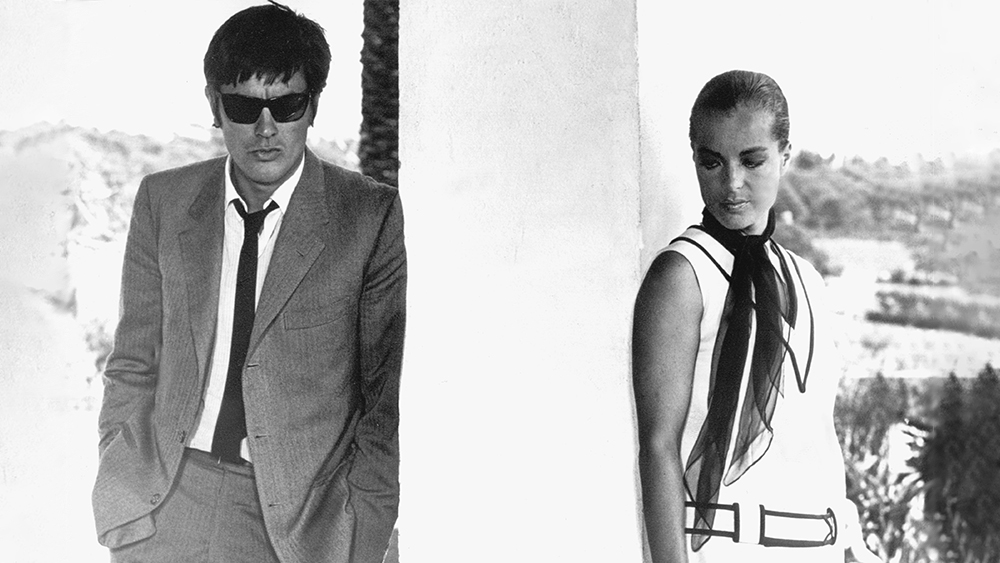 Despite starring in over 60 films across a period of five decades, Alain Delon is the exact opposite of a Hollywood star. First of all, he’s French. Second of all, he refused to learn English when Hollywood first approached him for a casting, in turn rejecting the conventional yellow brick road that most actors only ever dream of going down. Third, he’s got that whole matinee idol elegant nonchalance nailed (not entirely surprising given his nationality), and it mostly boils down to one key factor: his style.

Delon’s excellent taste in clothing was, in a way, handed to him through his on-screen roles. He rose to fame in the 1960s, taking on a bunch of lead roles, mostly in crime dramas. Fifty years ago, in Plein Soleil, he played Tom Ripley: a young, itinerant jetsetter who parades around Italy in generously unbuttoned weekend shirts, slim-cut chinos and horsebit loafers. In L’Éclipse, he was Piero: a lively stockbroker whose uniform only ever consisted of single-breasted suits, skinny silk printed ties and penny loafers. And let’s not forget Le Samouraï (1967), the cult classic in which he played a professional hitman who weaves through Parisian streets, strapped up in a double-breasted trench and imparting the garment with Gallic allure.

Delon and his family arriving in Rome in 1965. Right, Delon with then-fiancée Romy Schneider in 1959.  AP; DALMAS/SIPA

Added up, all of these fashionable roles quickly cemented Delon as a French sex symbol (basically the male counterpart to Brigitte Bardot). Like any good heartthrob, his swagger wasn’t limited to the screen. Delon’s attraction was cultivated through refined menswear that was worn with an admirable lack of fuss. Much like his characters, Delon’s off-duty wardrobe consisted mainly of simple tailoring. In the sixties, his go-to minimalist ensemble was a grey wool blazer (layered under a mid-length twill coat if it was cold), a white oxford shirt, knit tie, high-waisted, tapered trousers, loafers and Havana sunglasses. A Cartier Tank often adorned his wrist. In sticking to trimly tailored silhouettes and menswear staples in muted, neutral tones, Delon exemplified a truly effortless take on sartorial style.

This effortlessness extended beyond formalwear, too. Crisp white shirts were occasionally traded for cashmere v-necks, long sleeve polos and even chunky Aran sweaters. Tailored trousers were a mainstay, but he did dip into jeans territory a couple of times (making a solid case for straight cut white ones in particular). As for sneakers? Nada—leather shoes were worn day in, day out. With all of these items in mind, Delon’s style, at surface level, wasn’t all that groundbreaking. It was simply an abundance of essentials, but very few men at the time carried them with the same level of sophistication. The key, as it seemed, was a combination of consistency (through craftsmanship) and self-assurance (through character). Fifty decades on, that ideology hasn’t wavered – and it’s one we should all embrace.

Romy Schneider and Delon looking picture-perfect at the Cannes Film Festival in 1962.  LIDO/SIPA

Delon’s first signs of sartorial elegance appeared in Plein Soleil, which marks its 50th anniversary this year. To celebrate half a century of style both on and off-screen, we’ve sourced eight classic pieces to help you channel his perennially chic style today. Filter these into your everyday wardrobe and you’ll be on the road to achieving his je ne sais quoi in no time (as long as your pick up lines are just as suave).

Sure, Delon may be one of the coolest guys to make a case for the belted trench (see: Le Samouraï) but offscreen, he preferred to wear a simple, single-breasted design. AKA: a car coat. This one from Burberry ticks all the essential boxes.

What would Alain Delon be without his collection of oxford shirts? We dread to think. For the finest design, we suggest investing in one from British shirtmaker Turnbull & Asser. They were, after all, the first holders of The Royal Warrant (British, that is).

Once you’ve got your simple white cotton shirt, it’s time for the tie. Delon liked to inject a casual touch through this accessory so he favored a knitted texture—ideal for the upcoming winter season, FYI. Drake’s is made of silk but is decidedly easygoing.

Delon has consistently prioritized top-notch tailoring in his wardrobe. A pair of straight, slightly tapered, high-waisted trousers have long been his go-to—a cut that works with pretty much anything. French brand Husbands likely had him in mind when designing this extremely faithful pair.

Ok, so you’ve sorted yourself with an elegant overcoat and some sharp tailoring. The perfect ingredient to tone these down a bit? A nice bit of knitwear—specifically a rakish V-neck. For a Delon styling touch, layer a turtleneck underneath and tuck it into your high waisted trousers. Winter wardrobe sorted.

Sure, the colder season is settling in, but that never stopped Alain Delon from popping on a pair of sleek shades, so it shouldn’t stop you either. This pair by Dior are faithful to his favorite style: square, tortoiseshell and fitted with dark-grey lenses. Retro chic.

A Pair of Monkstraps

Delon always stuck to formal shoes—oxfords, derbies, monks, you name it. All are footwear staples, so you ought to have a pair of each in your wardrobe, but if you’re looking for a starting point, go with the monks as they work well with multiple dress codes. The best place to source them? British heritage brand Crockett and Jones.

The finishing touch to any man’s outfit is a timepiece. For Delon, more often than not, that was an elegant little Cartier Tank. For a truly authentic vintage look, opt for the small model—the proportions are true to what men were wearing in the 60s.