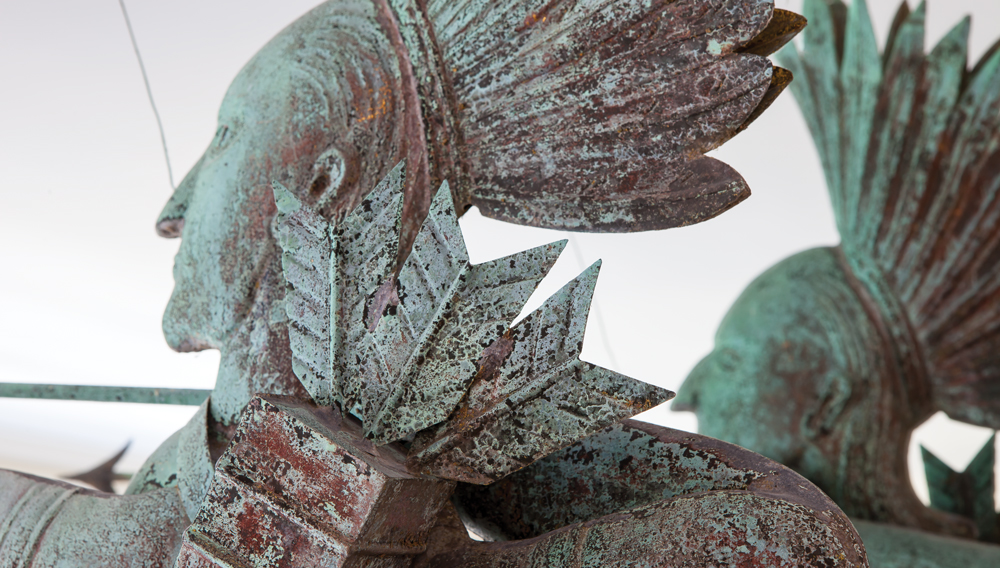 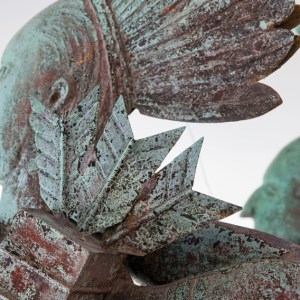 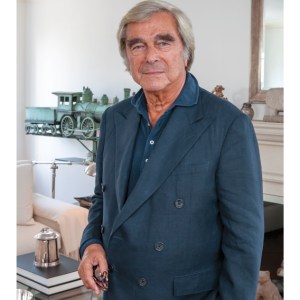 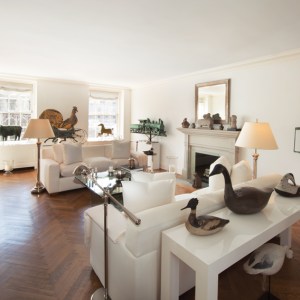 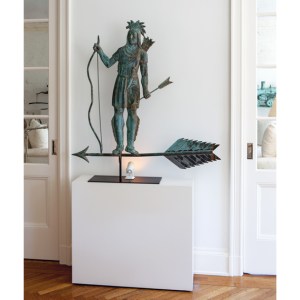 From 18th-century weather vanes to contemporary canvases, a fashion mogul has assembled a collection that spans the nation’s history.

Jerry Lauren’s Manhattan apartment reflects his life as a whole: It looks effortlessly perfect, but it is the result of decades of toil and thought. First your eye is drawn to the living room, where an exquisite trio of 19th-century duck decoys—a Gus Wilson eider, a Canada goose by an unknown carver, and a Lothrop Holmes merganser—command your attention. Soon, however, the airy space reveals a host of other treasures—19th-century weather vanes, wooden folk carvings, works by outsider artists—that compose one of the world’s finest assemblages of rare American art and collectibles.

Lauren, an executive of the Ralph Lauren Corp. and an older brother of its founder, is eager to show off his collection, a thoughtful, ever-evolving mix of big and small, antique and modern. He has created a place where Buddy L toy trucks coexist with Civil War–era stoneware jugs, where a limited-edition hand weight by Man Ray and a late-18th-century tankard by Myer Myers share the same tabletop, and where a Jean-Michel Basquiat hangs above a work on paper by Bill Traylor, each drawing energy from the other. “The things in my apartment, they go together,” Lauren says. “No matter what age they are, they work.” Just do not call the collection Americana. “I like to call it American art, or American folk art,” he says.

Lauren’s vision is receiving its due: He was one of the headline honorees at the American Folk Art Museum’s October benefit gala in Manhattan. Nancy Druckman, the former senior vice president and head of the department of American folk art at Sotheby’s New York, introduced him at the event. She was also standing at the podium in 2006 when Lauren made a record-breaking $5.8 million bid for a J. L. Mott weather vane. “He is a perfectionist­—an über-perfectionist—and he comes from a family where this is a well-established capability,” she says. “He’s connected the dots between seemingly disparate categories of objects, the continuity being the quality of the things and the recognition that all of this material is part of a continuum of American art. He goes from waterfowl decoys to Bill Traylor to Basquiat. I think what’s very interesting about Jerry and probably fairly unique is his ability to see these relationships and then go for it.”

It is no surprise that Lauren, executive vice president and creative director for men’s design at Ralph Lauren—a company that epitomizes American style—displays his pieces well. The space, however, would seem more at home in a contemporary art gallery than in a 1923 Manhattan apartment. With its minimalist white walls and streamlined custom furnishings, Lauren’s home is designed specifically to let the collection shine. “When you put them in a pristine, glass-enclosed white interior, they start showing up as masterpieces,” he says.

The spark that gave rise to the collection was not kindled in the city. In the early 1980s, Lauren and his wife, Susan, bought a weekend home in Connecticut. Surrounded by 60 acres of woodlands and dating to 1785, the home begged to be filled with period objects that reflected its rustic, early-American origins. “We didn’t know what we were buying, just a lot of fun stuff,” says Lauren, who still owns the rural retreat. “We looked for things that looked good in the house. We didn’t look to build a collection.”

As the pair went to more shows and gained more knowledge, they had an epiphany: “My God, this is really important sculpture, and it happens to be American,” Lauren recalls thinking. “It burst out of the country house and became important art.”

When he and Susan relocated their main residence from East 66th Street to Park Avenue about 22 years ago, they acted on their idea to install choice pieces in a more gallerylike setting. “I don’t know if it was radical,” he says, “but I tell you something, it was what I wanted and what my wife wanted. A very, very light, uncluttered atmosphere. It worked out. It was a very new way to show it, and it worked.”

Lauren’s appetite for American antiques and folk art sharpened after he met dealers Sy and Susan Rapaport in the mid-1980s. In particular, he had a good feeling about Sy on first sight: He was wearing a Polo sweater. Lauren was fresh off his first big purchase, a hackney-horse weather vane that he secured for $7,000. He solicited Sy’s opinion and learned that it was in fact a 1950s replica. Lauren returned it to the seller and has consulted the Rapaports ever since.

That experience did not put Lauren off of weather vanes—far from it. They form the backbone of the collection and range from a detailed locomotive engine made around 1890 for the top of a railroad building in Massachusetts to a regal rooster from 1785 that once graced a church in Maine to a leaping stag from 1875, fashioned from copper and frozen in flight. One example depicting a polo player—created between 1880 and 1890, apparently for a polo club in Maryland—had a natural appeal for Lauren, given his day job, but that was not why he bought the piece. “It’s an amazing form—it looks like a Stubbs painting,” he says. “This is art.”

Another 19th-century weather vane—depicting a Native American clutching his bow in one hand and an arrow in the other—holds a particularly important place in Lauren’s collection. “This, to me, was the first masterpiece we bought,” he says, recalling the moment when he and Susan spotted it about 25 years ago at the annual Winter Antiques Show in New York City. “This was when we learned how to look at weather vanes. This is the most perfect specimen of weather vane you can find.”

The weather vane that represents Lauren’s greatest adventure at auction takes pride of place in his Manhattan dining room. Standing 5 feet, 2 inches tall, created circa 1900, it depicts a Native American pulling back his bow. Lauren’s $5.8 million bid for the piece at the 2006 Sotheby’s sale set a world auction record for a weather vane, and the item remains one of the costliest pieces of folk art ever sold at auction.

“It had an inordinately low estimate on it,” Lauren says—Sotheby’s presale numbers were only $100,000 to $150,000. “Everybody who saw that weather vane said, ‘Jerry, that’s going to be a very expensive item. You are going to pay in the millions.’ I sat there and watched it go up. At $3.8 million, I raised my hand for the first time. ‘Sy,’ I said, ‘I’m going for it.’ ” He likens the sensation of bidding and winning to “an out-of-body experience” and still enjoys telling the story of unmasking himself as its winning bidder: “Friends said, ‘We just saw what it sold for, sorry you didn’t get it.’ ‘Really? I got it.’ They almost fell down.”

The record-breaking weather vane is displayed in front of a mirror, across from a group of framed works on paper by the late outsider artist Bill Traylor. “I have 20 of his acknowledged best,” Lauren says, and he increases their number when he can. At the opening night of last year’s Winter Antiques Show, he picked up a Traylor cat image. “Grabbed it in about 3 seconds.”

Another Traylor appears in the vestibule in a powerful trio that Lauren dubs the “story of fury”: The Traylor’s angry red background harmonizes with the energy of Furious Man, a 1982 work on paper by Basquiat, which Lauren acquired at Christie’s almost three years ago. A 1970s-era painted cheetah carving by the late folk artist Felipe Archuleta completes the group. “As we say in the fashion world, the three pieces are a moment,” Lauren says.

The rules Lauren follows as a collector are few but firm: Never buy to invest. (“That’s really important. That’s a no-no.”) Never buy anything you do not want to live with. (“Not one thing is in storage. When I buy something, I don’t collect to put it in a closet. I love to show it.”) And, of course, only pursue the best of the best. (“It’s not about the money—I can afford anything. If I fall in love with something, I manage to get it. But I only want to get it if it’s brilliant.”)

Sy Rapaport commends Lauren’s excellent eye and boundless patience to wait for ultra-choice items to come up for sale. “Most collectors don’t have the discipline, but all the great collectors do,” he says. “Great collectors wait 50 years for the piece that they’re missing.”

Lauren—and his enthusiasm for collecting—suffered a terrible blow when his wife succumbed to lung cancer in 2008. He continues to seek spectacular things, but he feels her loss keenly and misses her counsel. “If I ever bought something Susan didn’t like, it was a mistake, and I got it out of the house very quickly,” he says. “I was very angry when she passed away, and angry at God. For two or three years, I didn’t look at the walls. I didn’t want to come home.”

Today, though, the collection that they started as a weekend diversion and built together has also become something that evokes her spirit. “The love we had, the love for quality, the love for good taste,” Lauren says, “I think that’s there.” And he does indeed look at the walls, and the pieces in his collection, every day. “It has made my life full and been one of its greatest blessings,” he says. “It energizes me. I see it in the morning, I see it in the evening. If I don’t take a moment to look at it, it’s a rare moment. It has beautified my life. It’s the closest thing to perfection that I know.”