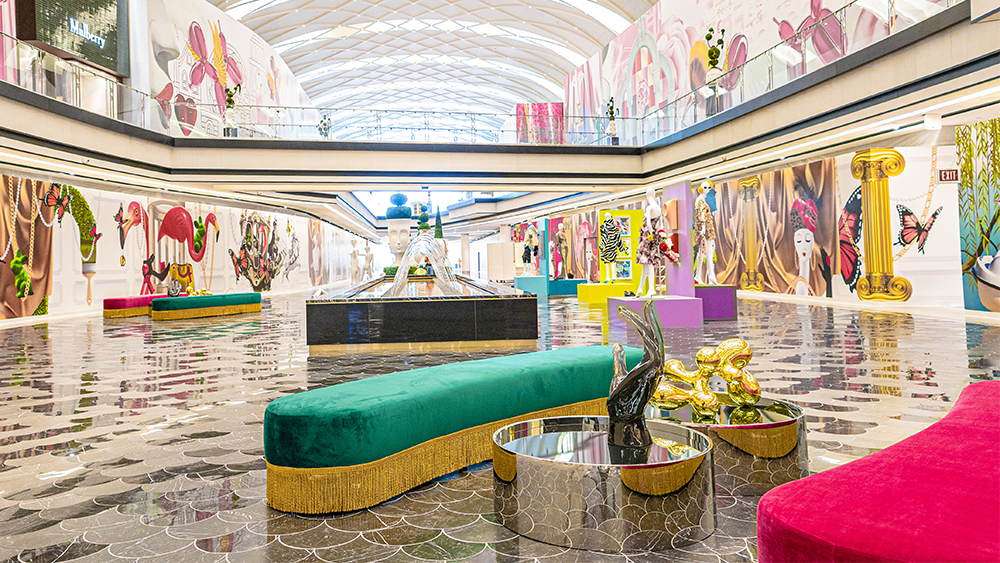 American Dream, the nation’s second-largest mall, has just added 300,000 square feet dedicated to the cream of the retail crop. The Avenue, as the new luxury wing is known, opened to the public on September 17 and we were there to inaugurate what promises to be the next great shopping mecca. Even if the mall is still waiting for most of its additional 20 or so marquee brands to break ground, there are plenty of opportunities to give your Amex a workout.

At the few stores currently open, including Dolce & Gabbana, Hermès and Saks Fifth Avenue, there was already considerable action. The morning of the opening, Hermès had a line so long that it made one wonder whether there was a silk scarf giveaway. But, as evidenced by the many orange bags being toted around the mall, these doorbusters weren’t just here to ogle—they came to buy.

The wing officially opened with a ribbon-cutting ceremony led by Ken Downing and Don Ghermezian, the chief creative officer and CEO, respectively, of Triple Five Group, American Dream’s developer. They were joined by the anxious crowd eagerly awaiting their chance to finally shop this much-hyped destination for all things luxe.

The ceremony had no shortage of cross-generational appeal. American Dream is also home to the world’s largest water park, which is somewhat curiously Nickelodeon-themed, so SpongeBob SquarePants and a cast of other cartoon-costumed characters were on hand to celebrate. For the New York fashion set who’d made the 20-or-so minute journey to East Rutherford, a coterie of models strutted in a riot of sequins and sparkle by Mexican-American designer Ricardo Seco.

The soaring, sun-lit space is lined with statuesque topiaries in surrealist vessels by New Jersey-native potter and interior designer Jonathan Adler. One huge, elongated fountain was designed to double as a runway for prospective fashion shows while several others featured exotic fish that seemed perfectly at home in The Avenue’s shoppable solarium aesthetic.

The crown gem of the wing is Saks Fifth Avenue, anchoring two floors including Louis Vuitton and Gucci shop-in-shops. Most of the men’s apparel is showcased in the back of the first floor with brands ranging from Brunello Cucinelli and Isaia to Off-White and Balenciaga. For the opening, there was a monogram station to emblazon newly purchased leather goods.

A fountain in the sunlit plaza in front of Saks Fifth Avenue.  American Dream

Outside of the second floor, guests packed into Carpaccio, the second outpost of the beloved Bal Harbour canteen, where the hors d’oeuvres and bubbly were plentiful. It will soon be joined by Brüt, a champagne bar, to keep shoppers’ thirst for grand crus quenched. The Avenue’s other incoming residents include Tiffany & Co., Alexander Wang, Gentle Monster and Saint Laurent, which is slated to open its doors in October.

The pandemic may have been a boon for e-commerce, but this tony retail destination makes a very strong case for the singular pleasures of shopping IRL.