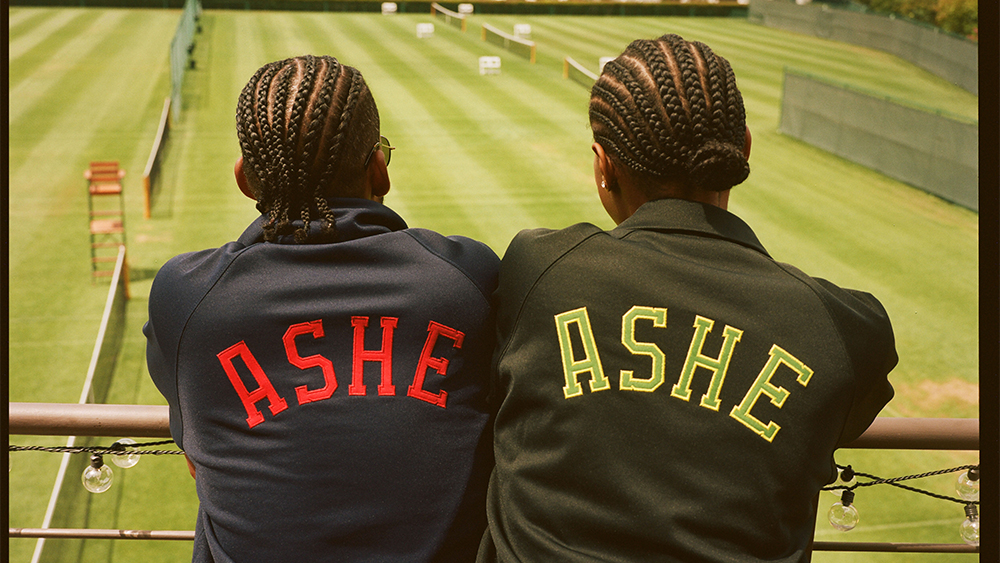 Since the pandemic’s onset, nearly five million Americans have picked up a tennis racket for the first time. According to data from the Physical Activity Council, it has experienced the highest growth rate among all so-called traditional sports. The old country club favorite is newly cool, thanks to a younger, more diverse crowd getting into it, yet the majority of tennis-wear remains stuck in a stylistic backcourt: staid polos and shorts or decidedly unsexy technical gear. The clothes haven’t quite caught up to the sport’s hip status, but one new brand is aiming to change that.

Launching on August 26, Ashe is a “tennis lifestyle brand” bringing a welcome dose of swagger to the classic whites. The result of a partnership between Jack Carlson, founder of Rowing Blazers, and Jeanne Moutoussamy-Ashe, widow of Arthur Ashe, the collection is an ode to the late tennis great. “You have Fred Perry and Lacoste. One’s French, one’s British. They’re both dedicated to the legacy of tennis players that lived a very long time ago but we don’t have an American equivalent,” Carlson tells Robb Report. “Who’s a better American equivalent Ashe?”

Pieces from Ashe’s debut collection, including an emblem based on the player’s signature backhand.  Ashe

The first Black man to win Wimbledon, the US Open and play on the Davis Cup team, Ashe is nothing short of a tennis legend. He was also a powerful advocate for civil rights, social justice and numerous health-related causes in addition to being exceptionally well-dressed—all of which makes him a pretty perfect mascot for tennis today, in both style and substance.

The idea for the brand actually began before the pandemic sparked a racquet sport boom. It came from Donald Dell, a former tennis player and the agent behind two of the biggest sneakers of all time: Adidas’s Stan Smith and Nike’s Air Jordan. Dell connected Carlson and Moutoussamy-Ashe back in 2019 and, along with designer and Kith alum Karl-Raphael Blanchard, they set about translating Ashe the man into Ashe the brand.

Arthur Ashe playing in the men’s finals of Wimbledon in 1975.  Tony Duffy

“He was a big clotheshorse on and off the court,” says Carlson, noting that Ashe’s style spanned from clean-cut collegiate in the 1960s to groovy in the 1970s and ’80s. What sets him apart from the sport’s other best-dressed dudes, like Björn Borg and John McEnroe, is that Ashe’s flair went beyond Fila tracksuits and short-shorts.

“He was very, very thoughtful about his style,” Carlson continues, citing the Davis Cup track jacket Ashe wore in 1975 to accept the top prize at Wimbledon—a sly statement to Jimmy Connors, who he’d beaten and had a rivalry with, stemming from Connors’ refusal to play on the Davis Cup team. But not all of Ashe’s wardrobe choices were so pointed; more often than not they were, simply, cool. “He was always there with a gold Rolex Day-Date. He had iconic eyewear: from aviators to wrap-arounds to very scholarly looking black frames in the 60s.”

A recreation of that infamous jacket is at the core of the debut collection. Elsewhere, Ashe’s blend of preppy sportswear and proto-streetwear is manifested in leopard print mesh shorts, a lawn green rugby shirt and a cable-knit tennis sweater tipped in the colors of the Jamaican flag (while Ashe was a native Virginian, the stadium bearing his name is in Jamaica, Queens). No tennis brand would be complete without a polo shirt and Ashe has several that, in place of Lacoste’s crocodile or Fred Perry’s wreath, are emblazoned with a silhouette of the player serving his signature backhand. Everything is available at the brand’s website, as well as pop-up shops in Manhattan and at the U.S. Open.

But more than merely paying homage to Ashe’s knack for dressing, the brand aims to honor his legacy of philanthropy and making tennis more accessible. “He couldn’t play in any country clubs,” Carlson observes of Ashe’s roadblocks to becoming the powerhouse that he was. “He couldn’t even play on an indoor court…he could basically only play in a segregated park where his dad was the caretaker.” Once Ashe had, against all odds, achieved athletic fame, he used his position to advocate for everything from ending apartheid to raising awareness about AIDS—which he died from in 1993 at 49-years-old.

For its part, Ashe the brand will donate a minimum of 7 percent of all profits to the Arthur Ashe Legacy Fund at UCLA, which furthers the political, social and health-related causes that Ashe championed during his lifetime, and Social Change Fund United, founded by Carmelo Anthony, Chris Paul and Dwayne Wade to support issues affecting the Black community, including youth access to sports.

“What’s happening with the sport now,” Carlson says, discussing tennis’s rise in popularity among a new audience, “Ashe’s life is very relevant. This is his life and legacy.”