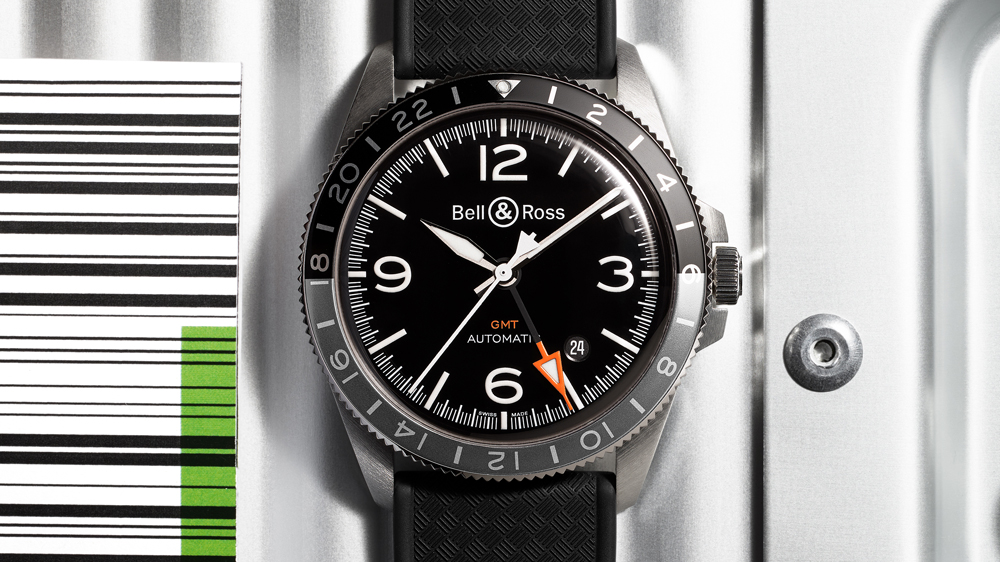 Bell & Ross has added to its handsome collection of BR V timepieces, which are characterized by their round faces (as opposed to the brand’s highly recognizable square-faced watches). The latest is the new BR V2-93 GMT 24H, which can tell the time in three different locations around the world. The functionality of a GMT watch (first created by Rolex in 1954 as the GMT Master) was first used by transatlantic Pan Am pilots during the dawn of commercial travel in the ’50s to help pilots tell time across two different time zones. It has been a classic tool watch ever since for both pilots and jet-setters alike.

For serious travelers who appreciate the functionality of a tool watch, Bell & Ross’ BR V2-93 GMT will appeal for its ability to tell the time in three time zones, unlike dual-time-zone GMTs. The white hands for the hour, minutes, and seconds tell local time, while an orange hand rotating around the dial in 24 hours shows a second time zone. But the bidirectional bezel has a 24-hour scale that allows for the reading of a third time zone, unlike Bell & Ross’ BR 123 GMT and the BR 03-93, which both have fixed bezels. Rotating the BR V2-93’s bezel clockwise subtracts hours, and anti-clockwise adds hours. The scale is featured in two colors: gray for daytime hours and black for nighttime, marking the first time Bell & Ross has introduced a bicolored bezel.

The black dial with large white numerals, present in many Bell & Ross timepieces, are meant to mimic onboard flight instruments. Black prevents reflections that interfere with a pilot’s sight during flight. The hands and indices of the timepiece have a Super-LumiNova coating, while the GMT hand is in bright orange for better visibility. A small date at 4:30 has been added but doesn’t overpower the look of the face.

The dial comes encased in satin-polished steel in a nice 41 mm size and features a screw-down crown and push buttons with a sapphire caseback to view its BR-CAL.303 (ETA 2893-2) automatic mechanical movement. The BR V2-93 GMT 24H is a functional and handsome tool watch and comes in at a reasonable $3,250 (for the rubber strap) to $3,500 (for the steel bracelet) price point to boot.