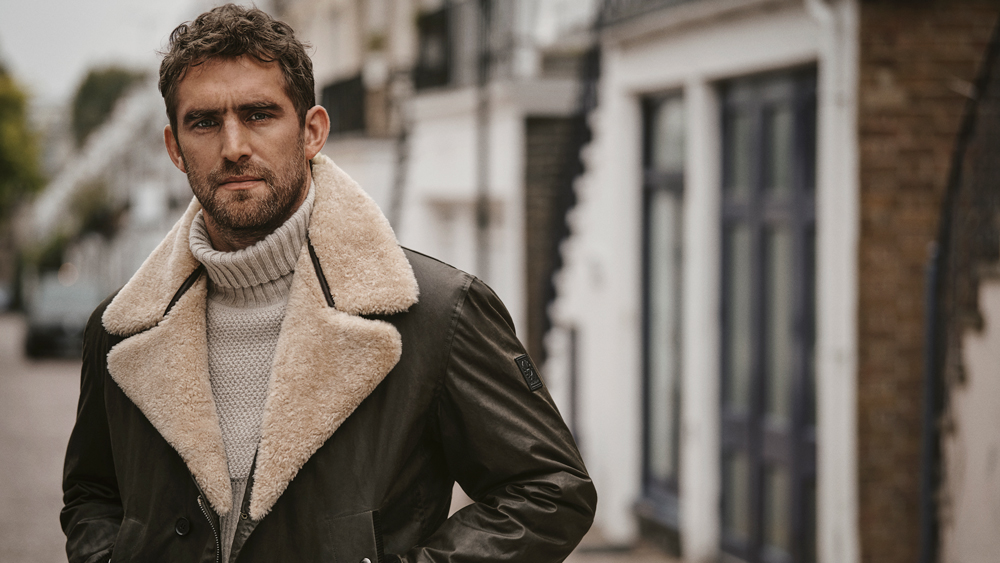 Even if you don’t know Belstaff by name, it’s likely you’ve been a beneficiary of some of the British brand’s cutting-edge technologies. Since producing its first waxed-cotton jacket in 1924, the label has made it its business to keep you warm, dry, and generally protected from the elements. Now the brand is pushing that heritage a step further with the launch its capsule collection, appropriately named “Introducing,” as it is the first from new creative director Sean Lehnhardt-Moore.

Though the line is full of modern shapes, it is also a return to Belstaff’s roots—doing away with the neon nylon and streetwear-inspired shapes it has experimented with over the past few years and instead focusing on the materials and silhouettes the label does best. Lehnhardt-Moore took a deep dive into the brand’s extensive archives, and the resulting outerwear styles draw heavily on early versions of jackets its designers have spent nearly a century perfecting.

It follows, then, that the line relies heavily on waxed cotton—a fabric Belstaff helped develop to protect the earliest motorcycle racers (and the daredevils behind the 1,000 mph Bloodhound Project) from the rough-and-tumble conditions out on the muddy tracks. The Trail jacket ($950)—which features such a strong water-repellent wax coatin that on first glance it looks like it’s made out of leather—is the most obvious throwback to this heritage, featuring an aviator-inspired shape and a thick detachable shearling collar. The Journey jacket ($995), Lehnhardt-Moore’s top pick from the capsule collection, also follows in this tradition. That canvas style and the travel-friendly weatherproof Weekender ($475) feature more relaxed cuts that recall the brand’s Roadmaster jacket, which has been a bestseller since it was first introduced in 1981.

Where those styles go rugged, the Cooper ($1,095) goes sleek—a nod not to exacting traditions of motorbike racing, but instead to the dolce vita art of scootering. The only leather style in the lineup, it features a slim, 1950s-inspired cut and vintage plaid lining. The jacket looks especially sharp when paired with a turtleneck, and though the style doesn’t feature the same hard-wearing look as the rest of the collection, it is constructed to be every bit as durable as the others—proving high style doesn’t have to be precious.