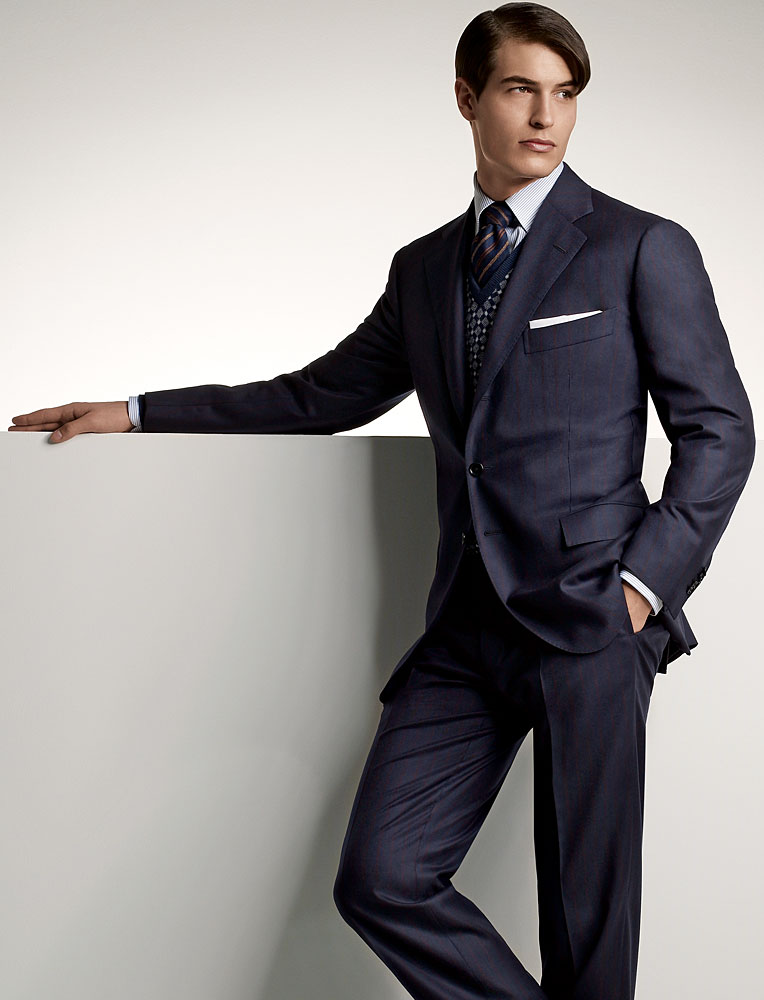 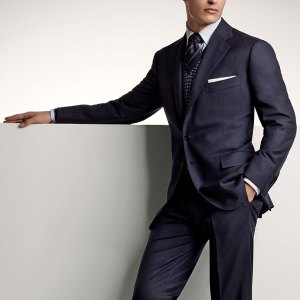 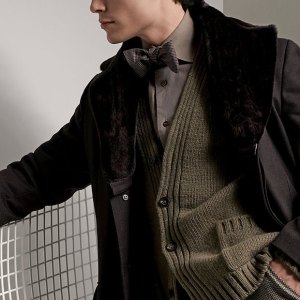 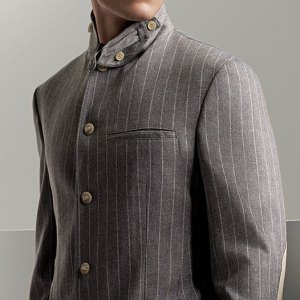 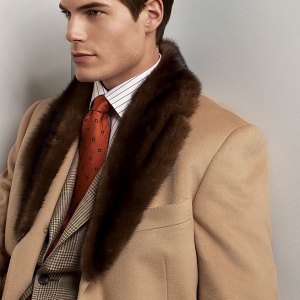 If soft, natural shoulders, unusually high-notched lapels, and suppressed waists do not make suits and sport coats from Cesare Attolini (www.cesareattolini.com; available through Ellegi, 212.246.7034) immediately recognizable, it takes only a peek inside the garments to see how the Neapolitan tailor cuts a jacket like no one else in the world. Attolini’s interior pockets are mounted directly in the coat fabric, not in the inner lining, as are most suitmakers’. This design creates a more durable, rip-resistant, and aesthetically pleasing interior. For greater elasticity and added comfort, the linen waistbands of Attolini’s trousers, which have expandable pleats, are constructed by hand—not produced by machine and added later. And, as with most bespoke garments, all of Attolini’s seams overlap, instead of butting against each other. It is a purely aesthetic detail that can be achieved only by hand. The label, which displays your name and the date the suit was made, requires 20 minutes to apply, by hand, using Attolini’s distinctive zigzag stitch.

The brand’s distribution is extremely limited, and Attolini has never sacrificed quality for the sake of greater sales volume. Brothers Massimiliano and Giuseppe Attolini adhered to that principle this past year, when they expanded their father’s business beyond handmade tailored clothing, cotton dress shirts, and silk neckwear. The company’s topcoats, for instance, are made like precision-fit suit jackets, with the characteristic set-in Neapolitan shirtsleeves, and they are cut from vicuña, double-faced cashmere as well as other exclusive fabrics. The company’s first foray into knitwear produced elegant, classic solid and jacquard sweaters, which are knitted individually on 33-gauge machinery using only pure Scottish cashmere yarns. And butter-soft suede outerwear is handmade at the firm’s own atelier in Naples, Italy. The jackets are lined, again by hand, entirely in cashmere.

Though Brioni (212.376.5777, www.brioni.com) regularly tops the lists of the world’s most prestigious menswear brands, the Italian clothier spent the past year embroiled in legal squabbles—with its contractors and some of its key executives—that threatened to derail its collection and tarnish its reputation. Neither happened, thanks to the members of the company’s new executive committee (Andrea Perrone, Antonella de Simone, and Antonio Bianchini), who worked with a team of designers to keep the focus on the superlative items—many of them limited by the rare materials from which they are constructed—that made Brioni a fashion polestar.

For fall, the Brioni wardrobe is predicated on topcoats, which are rendered in cashmere, often blended with chinchilla, and lined with herringbone-printed sheared mink, sable, beaver, astrakhan, or other opulent furs. In most instances the linings are not removable, reinforcing the notion that the man who wears Brioni is a peacock who has no desire to disguise or downplay his love of extravagance. Other items in the Brioni closet are equally lavish and rich with details. These include herringbone quilted ski jackets with crocodile trim; fine-gauge turtlenecks made of cashmere/silk or worsted vicuña; Prince of Wales blazers and double-breasted and three-piece suits made of pure cashmere; velvet tuxedo jackets with Lurex pin dots and silk satin edging; and crocodile shoes decorated with suede spats. Even outerwear is rendered from shearling, sheared mink, waterproof silk, or double-faced cashmere. So much for function usurping style.

Mantua, Italy–based Corneliani (212.593.1155, www.corneliani.com) proved that it is an innovator in 2006, when the company created its ID blazer—a hybrid between outerwear and a sport coat. This year, to commemorate its 50th anniversary, the family-owned business introduced a collection of semi-skeleton-constructed cashmere suits with French-faced interiors and covered interior seams; fully constructed silk/cashmere blazers; and topcoats. All are sold in limited editions of 100 each. The debut demonstrates that Corneliani can compete in the world of handmade clothing. While some suitmakers put their names on sportswear but do not actually produce it, Corneliani approaches the more casual side of menswear with the same focus on fine stitching and detailed tailoring that it employs for its suits and sport coats. In many cases, the cashmere sweaters and cotton polos, fleece pullovers, six-pocket wool/nylon stretch jeans, and gently tapered woven shirts also are designed to work in concert with the ID blazer. The blazer has been updated in a butter-soft wool-and-cashmere tweed, and now comes with detachable knit vest inserts for a look that is more metropolitan and a little less rugged than the previous incarnations.

Throughout its collection, Corneliani continues to include small but important details—throat tabs trimmed with leather, microsuede undercollars, pocket flaps, and suede elbow patches—that offer a sporty interpretation of even the most sophisticated tailored pieces and give the collection its cutting edge.

When Yvan Benbanaste assumed the role of fashion coordinator at Pal Zileri (702.732.2100, www.palzileri.com) at the end of 2006, he took on the near-impossible task of making the Italian clothier’s multiple licensees produce outerwear, knitwear, and other sportswear with the same consistency and level of quality the parent company had achieved years earlier with its handmade Sartoriale suits. “I told them, ‘When the customer looks into the [store] window, only one message should be seen,’ ” explains Benbanaste, a former creative director at Testoni footwear. The young stylist achieved his goal of giving Pal Zileri a singular identity by coordinating clothing and sportswear with a uniform color scheme, by elevating the quality of its fabrics, and by streamlining its production methods.

For this fall’s collection, Pal Zileri concentrated on the interiors of its garments, lining topcoats, the undercollars of shirts, and the interior pockets of blazers with the same pinstripe flannels that it uses to produce its top-end Sartoriale clothing. Suede has been added as elbow patches and as button and pocket trims to highlight small, hand-sewn details. Emblematic flying lions, long the symbol of Venice, now adorn sporty knit and woven shirts as decorative details. (Pal Zileri produces much of its collection in Venice.) Furthermore, the entire fall collection is far more tactile—what Benbanaste calls “the emotional side of luxury”—thanks to the incorporation of more opulent fabrics, including double-faced cashmere and wool/cashmere blends for jackets, superfine cotton flannel for shirts, and cashmere, vicuña, and mink for outerwear. Technical pieces, such as microfiber outerwear and waterproof polyamide trench coats, are offered with detachable, plush beaver linings. Pal Zileri also offers dress footwear made from crocodile, and leather goods produced from matte-finished, mottled calfskin with pinstripe trim. The company has even added a touch of refinement to sneakers by rendering them in pinstripe wool flannel.

It takes a certain kind of gentleman to wear a pleated silk necktie adorned with Swarovski crystals, an oversize pair of diamond and 18-karat-gold cuff links in the shape of a roulette wheel, or a nubuck (matte-finish) crocodile bomber jacket with a sable lining. Stefano Ricci (212.371.3901, www.stefanoricci.com) knows such opulent wardrobe components are not for everyone, particularly those who are conservative or timid when it comes to fashion. Yet the last thing the Florentine designer would ever put his name on is a generic collection of suits and sportswear that is indistinguishable from other Italian labels. “My customer doesn’t need one more suit or 20 more shirts,” explains Ricci. “He wants to buy unique things that make him feel good.”

Although Ricci’s offerings range from tailored clothing and crocodile sneakers to jeweled cuff links and a new line of denim jeans with a distinctive horn waist patch, the designer does not view his collection in the context of a “total look,” as other Italian clothiers do. Instead he focuses on creating one incomparable object at a time: silk organzine neckties printed with 14-?color microdots, a weighty cashmere sweater lined in sheared mink, a jean jacket with calfskin under the collar and a dress-shirt lining, and a two-tone double-faced cashmere blazer with leather-trimmed seams. Each article is conceived to the smallest detail by Ricci, not a design team. His shirts, for instance, always contain exactly 25 stitches per inch; his belts are made from New Guinea crocodile with scales measuring less than 55 centimeters long.

Giorgio Armani (212.988.9191, www?.giorgioarmani.com) has long been critical of suitmakers on London’s Savile Row. He once described their bespoke garments as so heavy and antiquated that by today’s standards “they should be in black and white.” He proves once again, this time with a regal-themed collection, that he is the king of creating clothing that combines the formal elegance of vintage suitmaking with the softness and versatility associated with current styles.

Armani has embraced the rope-shouldered, structured jackets of long ago but added his own contemporary touches, including tubular sleeves and form-fitting shapes cut from soft velvets and textured wools. Likewise, his trousers, made from velvet or textured wool blends, are sewn with a tailor’s precision and tapered. High-buttoned vests, double-breasted topcoats, and shiny, belted trenches—often accented with hats and handkerchiefs—also recall the designer’s enduring fascination with the 1930s. However, now he juxtaposes those looks with modern, lightweight sportswear, including quilted python jackets, bark-finished crocodile shirt jackets, zigzag-stitched or shawl-collared sweaters, velvet blazers, and leather outerwear jackets trimmed with rabbit. Thus Armani demonstrates how classics can become current in the hands of an Italian master.