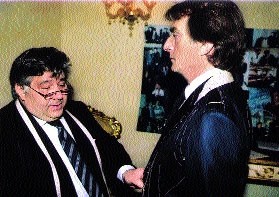 While other suit makers remain content with superfine fabrics and quality workmanship, Kiton continues to raise the style bar. The Naples, Italy, company that is known for its old-world handmade quality also keeps an eye fixed on the future, testing new concepts with its evolving LaSa (for Laboratoria Sartoriale) model, which features linen/canvas inner linings, an exaggerated pitch to the shoulder, and a proprietary method of attaching the sleeves to the armhole.

Kiton is also a big proponent of finessing fine fabrics. Last summer, it offered a suit made of 180-thread-count, two-ply cotton dress shirt material that weighed less than 600 grams. And last fall, the company unveiled a collection of cashmere corduroy suits and sport coats that triggered multiple imitations in the designer world this spring.

The latest brainchild of Kiton owner Ciro Paone involves pineapple—yes, the fruit. This year, Kiton launched a collection of lightweight sport coats made from a blend of silk, linen, and pineapple husk. The exclusive fiber, which is woven into cloth by England’s Reid & Taylor, is considered a lightweight alternative to more rough-hewn fabrics such as tweeds.

Contrary to popular belief, true suit quality begins with the fabric maker, not the tailor. A highly skilled tailor may be required to maneuver a needle and thread through superfine wools, but it takes a superior cloth maker to create those fabrics that are elevating the age-old art of suit making.

Since Gamma Beta Holdings bought 446-year-old Moxon Huddersfield in 1993 and installed managing director Firas Chamsi-Pasha, the English mill has developed an arsenal of extraordinary fabrics. Pivotal to these is the first 12.9-micron, Super 210 wool, which is spun on special looms that must be slowed to a snail’s pace to handle the delicate fabric. The gossamer-like cloth, which is regarded as superior to both cashmere and vicuña, is made from the wool of a rare breed of sheep. The material can be produced only every three years—it takes that long to collect enough fiber from the animals, which are specially cared for and kept isolated. The extreme rarity of the fabric means that supply is restricted to the most exclusive menswear houses, includ-ing Brioni, d’Avenza, and Oxxford.

Fit For A King

Gianni Campagna has been sewing since the age of 7, but his big break didn’t come until his 18th birthday, when he began an apprenticeship with master tailor Domenico Caraceni, Italy’s Michael Jordan of sartorial style. By the time he was 22 years old, Campagna was so skilled with a needle and thread that he earned Italy’s prestigious Golden Needle award. At 24, he won the country’s Golden Scissors award for pattern making, giving him the credentials to land the jobs of tailoring wedding suits for both Prince Rainier of Monaco and King Juan Carlos of Spain.

Campagna bought Caraceni’s business in 1999, and he employs 60 tailors to fashion more than 700 suits a year under the Caraceni and Sartoria Campagna labels. Campagna personally makes several dozen custom suits each year under his signature Gianni Campagna label. These creations are 60-hour labors of love, the best of which incorporate details such as pinstripes made from 24-karat gold thread.

One of Campagna’s signature elements is the “anti-roll waistband,” consisting of two buttons above the zipper so a gentleman can loosen his waistband at will. “Wealthy men with large stomachs appreciate such practical touches,” says Campagna, whose own girth may have served as inspiration for the ingenious innovation.

Campagna practices his handiwork in Milan’s 350,000-square-foot Pa-lazzo Bernasconi, which he bought for $18 million in 2000 and transformed into a showroom and posh penthouse suite for his best clients.