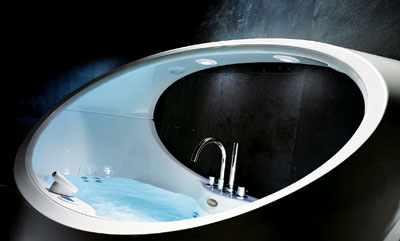 Two years ago, an official from the European branch of Jacuzzi invited Pininfarina, the 75-year-old Italian design company that has shaped Ferraris, Maseratis, and Alfa Romeos, to collaborate on a product line that would present whirlpool technology in a sleeker and even more sensual light. “All of the sketches [evolved from] the same thought: to create a design that was an extension of how the product made a person feel emotionally,” says Jenny Davis, a Jacuzzi representative. The Morphosis line, whose name is derived in part from the Greek word meaning “to take shape,” is available in three distinctive styles: Alpha (starting at $22,000), a two-seater equipped with 12 hydrotherapy jets to soothe the back and body and distinguished by an arch that is illuminated with fiber-optic lights; Gamma (starting at $22,000), a spacious corner tub with a jet and lighting configuration similar to the Alpha’s; and the Sigma (starting at $20,000), a tub for one that features nine hydrotherapy jets and a lighted arch.  (Click image to enlarge)

The company considered to be the Patek Philippe of watch winders has introduced an extravagant diamond-pavéed single winder in addition to the massive Scatola del Tempo 96 RT RA ($130,000), which stores and winds as many as 96 watches in a solid briarwood cabinet lined with sumptuous, naturally tanned Italian calfskin. The whisper-quiet winding motors are made in Switzerland, and each row of winders operates independently. Designed and assembled in Italy, the unit also provides security with shatterproof crystal doors, an electronic lock, and hidden shelves. —Elizabeth Doerr

Although Panama hats are made all over the world, authentic Montecristis—made from toquilla straw as thin as dental floss and considered the pinnacle of Panamas—are woven only in Ecuador. And of that country’s thousands of registered hat makers, only 15 are considered master weavers capable of producing the world’s finest Montecristis.

Last year, four of those 15 weavers—Simón Espinal, Marcial Espinal, Idolo Espinal, and Maria Ordoñez—formed a partnership with Hawaiian hat maker Brent Black to launch his Master Weavers line of Montecristi masterpieces. Because of the fineness of the straw and complexity of the workmanship involved, each weaver produces fewer than six of these hats per year. Black designs each hat using his interpretations of vintage Panama patterns, and he also blocks them and applies the finishing touches after construction is completed in Ecuador. A one-of-a-kind Master Weavers hat can carry a price tag of $25,000; custom designs are more expensive.

IndeBleu, a new French-Indian restaurant in Washington, D.C., offers a number of enticements: a whimsical cocktail menu designed to resemble a subway map; a general manager, Jay Coldren, who defected from the Inn at Little Washington, in Washington, Va.; and a menu replete with novelties such as a seared foie gras sandwich with rose petal marmalade on garam masala brioche. But IndeBleu’s most alluring feature is its chef’s table nestled in a niche in the second-floor dining room. The table accommodates eight and sits on a rotating platform controlled by a device resembling a miniature captain’s wheel laid on its side. Turn it, and the table rotates to face the kitchen and all of its frenetic activity. Once your meal has arrived, and your attention turns from the kitchen to your plate, you can spin the table back to its original position.  —Sheila Gibson Stoodley

Blackcomb’s vertical mile has never been so easy to conquer, thanks to the new Four Seasons Resort Whistler Ski Concierge. Located at the British Columbia ski area’s base, just a quick walk or shuttle ride from the resort, the concierge service liberates guests from orchestrating nearly all aspects of their alpine activities. Staff members help book lift tickets, schedule private and group lessons, arrange excursions (including heli-skiing in Whistler Mountain’s backcountry), and tune and store equipment in the slope-side facility.

The staff also provides warmed boots and inserts, as well as high-performance skis and apparel on request, to ensure that you find your ski legs quickly and comfortably. In fact, the Four Seasons Ski Concierge will supply just about everything you need to get to the top of the mountain. The rest is up to you.

Vilebrequin pioneered the use of quick-drying spinnaker nylon canvas sailcloth for swimsuits and patented a waterproof pocket for keeping valuables secure and dry. In addition to their practical nature, Vilebrequin’s swim trunks exhibit elements of fun and exclusivity: The company never repeats any of its whimsical and colorful seasonal prints.

Vilebrequin, which was launched in Saint-Tropez more than 30 years ago, after Fred Pryskel transformed a local restaurant’s checkered tablecloth into a swimsuit, recently introduced the limited edition Vilebrequin Saint Tropez VIP Collection, featuring 12 prints—among them its characteristic floral patterns and several hand-embroidered designs—produced in quantities limited to 350 suits per print. These trunks, priced from $220 to $250 each, feature buttons (rather than Velcro) on the pockets and sterling silver tips at the ends of the drawstrings.

A Paris vendor once asked Mariano Ospina how he categorized his coffee. Ospina, a Colombian who is the fourth generation of his family to grow coffee beans, recalls the Parisian asking if notes of chocolate or vanilla lurked in the blend. “No, it’s just pure coffee,” he replied. When Ospina commemorated the 170th anniversary of his family’s namesake coffee company, he created a blend—Ospina Presidential Coffee, Private Reserve, Limited Edition—that is even purer. Ospina says that instead of harvesting the Arabica Typica coffee cherries from the highest altitudes of the company’s 50,000-acre plantation in the Andes mountains every other week, workers gathered them weekly. Also, Ospina normally sun-dries its coffee beans for slightly more than one month, but those destined for the anniversary blend were dried for almost two months. When the coffee, which costs $45 for a 1-pound bag, was released recently in a limited edition of 5,000 in Paris, Ospina struggled to explain how the blend differed from his standard offerings. “Everything is enhanced and intensified—the body, the aroma, the flavor, the aftertaste. You can’t get coffee any purer or richer than that.”  —Sheila Gibson Stoodley

Sporty is not a word often used to describe Stefano Ricci’s designs. The Italian clothing maker typically displays a preference for the lavish and exotic—from outfitting a Lamborghini with emerald green crocodile upholstery to applying Swarovski crystals to his elaborately pleated silk neckties. But when Ricci designed his new sport shoe collection, he emphasized comfort and function, collaborating with Italian shoemaker Artioli to include such practical elements as extremely flexible soles and moisture-wicking features. Such aspects notwithstanding, the collection still bears Ricci’s stamp: The sneakers, driving shoes, and moccasins (prices upon request) are made from ostrich, crocodile, and other exotic skins that have been dyed in an exuberant color palette.  —William Kissel

With his newly opened Brella Bar, a boutique offering some 500 antique, new, and custom-made umbrellas priced from $35 to $450, David Kreitman hopes to help the once essential accessory reclaim its fashion cachet. A fruitless search for a high-quality, handmade umbrella prompted Kreitman to open the shop, which is located on Elizabeth Street in Lower Manhattan. Frustrated, he did some research and discovered that only a few workshops continue to make such products, including the British company Swaine Adeney Brigg, established in 1750, and Milan’s Francesco Maglia, which has been in business since 1853. In addition to umbrellas from these brands, which use impeccable cherry, ash, and oak for their handles, Brella Bar offers unusual vintage models, including one with a mother-of-pearl and sterling silver handle and another with an orange Lucite handle and a pagoda-style canopy. Offering various fabrics, leathers, exotic wood handles, and distinctive canopies, Brella Bar creates custom models in about three weeks.  —Jill Newman

S.T. Dupont, the Parisian firm that has helped transform fire from a necessity for survival into a luxury accessory, now has reinvented the flame—or at least the way in which a flame is presented for a cigar—with its new S.T. Dupont D-Light butane lighter.

The D-Light was fashioned without a lid, and so the “ping” sound produced by flipping open the lids, a characteristic long associated with S.T. Dupont lighters, is absent. Instead, the D-Light, a slim and sleek design, produces a flame that emerges at a 90 degree angle from the lighter when you push open the front panel with your thumb and then flick the roll bar with your index finger. Pressing a button snaps the lighter back into its case, extinguishing the flame. The D-Light is priced from $600 to $725, depending on the model.  —Richard Carleton Hacker

The Morphis ESP Motion Simulator, an 8,000-pound fiberglass machine standing 10 feet tall and 20 feet wide, will make any video game system seem hopelessly inadequate. The machine, which is available from toy vendor FAO Schwarz, comes with a library of 155 CD-ROM adventures, some of which are educational, including the one that guides passengers on a Fantastic Voyage–style trip through the human bloodstream. Others invite you to feel the sensations of piloting an Alpha jet, racing in a British touring car championship, taking a white-knuckle bobsled ride on an Olympic track, frolicking with dolphins, leading a mission to Mars, and riding in a U-boat to the lost continent of Atlantis. The machine’s capsule seats eight and is designed to slide back and forth and move up and down to enhance the experience of viewing the computerized 3-D images. The Morphis ESP is priced at $300,000, and you can take a test drive (for $5) in the demonstration model at FAO Schwarz’s New York store. —Sheila Gibson Stoodley

At a time when other airlines are cutting back on or even eliminating first-class services, Lufthansa is enhancing its. Through a partnership with NetJets, the German carrier now offers Lufthansa Private Jet, a service that provides private-jet connections from its Munich hub to more than 1,000 airports throughout the European Union, Switzerland, and Norway. The moment you disembark from one of Lufthansa’s long-haul commercial flights, a chauffeur is ready to drive you across the tarmac to a waiting Cessna Citation Bravo or Cessna Excel jet. Once aboard the jet, which can seat as many as six of your guests, you will be served a gourmet meal accompanied by a choice of wines selected for their ability to withstand low humidity and retain their taste at cruising altitude. Prices for Lufthansa Private Jet service range from $6,000 to $25,400, depending on the destination, plus an extra $395 for each additional passenger. Private Jet is scheduled to run through October, and if it proves successful, Lufthansa will expand the program.