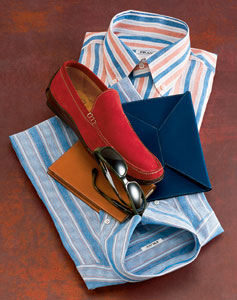 Each Kiton ultrafine dress shirt, made from the finest thread-count cotton, requires six hours of labor and more than 100 sewing operations. Embroidered buttonholes and handkerchief-rolled and -stitched edges are only a few of Kiton’s 14 distinctive hand-sewn applications. The collar on the shirt is particularly noteworthy for its inside panel of oxford cotton to prevent neck irritation and shrinkage.

Fray’s boldly colored striped linen sport shirts benefit from the Italian shirtmaker’s attention to minute details. Not only is Fray the largest consumer of Riva fabrics, regarded as the finest in the world, it takes extra care to ensure patterns line up on cuffs, collars, shoulders, and the button placket. Other fine points include buttonholes that are disguised in the center of a stripe and seams that are folded over twice and single-needle stitched at 26 stitches per inch, the closest possible without causing tearing. In addition, three types of buttons, instead of one standard size, are used for collars, cuffs, and plackets for easier fastening.

Arnys Cravates d’Atelier, or house ties, resurrect a tradition of tie making that dates to the early 20th century. Crafted from 112-count, double-faced silk organza, these seven-fold repeat-stripe ties are hand-rolled and -pleated, and are completely devoid of inner linings. Furthermore, the unusual silk gives them a matte finish and a sturdy feel that enhances durability and also allows them to be shaped effortlessly. Even the label is woven in 56-thread-count silk organza directly into the tie.

Although Hermès owns its own tannery, Gordon-Choisy, it accepts only two out of every 100 skins produced there for its own collections. Such uncompromising standards of quality have long made Hermès the industry leader. At its Lyon and Limoges, France, factories, more than 30 craftsmen toil at the brand’s signature saddle stitching alone. This proprietary process employs linen thread and two needles to create a single stitch knotted in the middle for strength and durability.

Western belt makers typically cut their buckle sets from sheets of sterling silver and then solder and etch them by hand. Luxury dress belt makers, on the other hand, work like jewelers, casting their buckles from molten sterling or 14-karat gold, then buffing the finished pieces to a radiant finish. Vogt Silversmiths is that rare silversmith that employs both methods, and, more important, puts the same artistry and handwork into each. This family-owned California company, which has been guided by three generations, clearly understands that subtlety and elegance go hand-in-hand.

Richard Morgenthal followed in his father’s footsteps by becoming a licensed optician, but he has always viewed life with the eyes of an artist. So it is only natural that this amateur painter brings his artistic viewpoint to the eyewear business that he and his wife, Leslie, established in 1986, when they acquired a century-old New York optical shop and renamed it Morgenthal Frederics. Morgenthal was among the first retailers to recognize the creativity and fashion potential of brands such as Christian Roth and François Pinton. And Morgenthal’s own signature handcrafted frames—made of titanium, acetate, buffalo horn, and 18-karat gold—are as collectible and colorful as the hand-stained wooden boxes displaying them in the store windows.

During the late 1990s, Russian jewelry designer Yuri Kolesov was commissioned to design special projects for Harry Winston. Her partner, designer Zoya Levinshtyn, was mentored by Vladimir Rodin, currently of Kieselstein-Cord. These two formidable design talents teamed with business partner Helmie Ashiblie to found Atelier Yozu, a New York City design studio that has worked for Harry Winston, Ralph Lauren, and Loree Rodkin, among others. This year, the duo began turning out their own line of masterful cuff links inspired by early-20th-century designs. These amazingly detailed links are made by hand using gold, precious stones, and exotic materials, such as 20,000-year-old mammoth ivory, and are sold exclusively at Dallas retailer Stanley Korshak.

Silvano Lattanzi did the unimaginable last year by devising a pair of reversible crocodile loafers. And that is not the only astonishing achievement by this visionary artisan shoemaker. Lattanzi’s collection continues to grow and become more diverse each season. In addition to genuine cordovan lace-ups and serious brogues with an antiqued delavée (bleached) finish, the Italian master is now dabbling in sport shoes, including handmade, perforated leather golf shoes that can be monogrammed, and boat sneakers that can be customized with your own yacht logo.

It takes a superior craftsperson to turn a classic pair of chestnut-colored lace-ups into fanciful, but very wearable, tricolored footwear. But it is a simple feat for Paola Gavagna, the colorist behind most of Sutor Mantellassi’s incredible hand-tinted shoes. Gavagna was among the first to revive an old-world bleaching process called delavée, through which color is chemically stripped from the shoe to impart an aged, antiqued effect. This year, she improved the technique so that when the original black or brown shade is bleached away, another color is absorbed by the leather. Sutor Mantellassi is the first to take a multicolor approach to fine leather footwear, blending three and even four hues on a single shoe, then hand-polishing it to enhance its luster. Far from outlandish, the result is a beautifully progressive shoe collection that is as individual as the wearer.

Tod’s may have invented the driving moccasin, one of the most widely copied casual shoe designs in the world, but another Italian shoemaker, Barrett, perfected its construction and performance. Made from suede or piper calf (known for its strength and superior suppleness), Barrett’s loafers are entirely stitched by hand directly on the last and without predrilled holes. This technique, known as opanca construction, disguises any visible holes and makes the shoe more impervious to water.

Stallion Boot & Belt Co. is one of the few bootmakers that still works almost entirely by hand, implementing more than 140 steps—including hand-cutting and -stitching every piece of leather. The secret to the El Paso, Texas, bootmaker’s fit is a steel shank embedded in the sole and rows of pegs made from the wood of lemon trees instead of nails to give additional support to the arch. Furthermore, the intricate patterns and stitching—many suggested by custom commissions—are masterful works of art incorporating stingray, hippo, frog, water buffalo, and other exotic skins paired with unusual materials such as fossilized walrus and mammoth ivory.

“Rodeo cowboys take more pride in their belt buckles than in their automobiles,” insists Clint Orms, who made his first buckle at age 15 and has produced exceptional Western buckles for more than three decades. His entirely handmade collection of buckles crafted from sterling silver and 10-, 14-, and 18-karat gold, are intended to be heirlooms. To that end, Orms may require 100 hours or more to complete one buckle, depending on the intricacies of the engraving and the amount of customization you desire. Other signature details include belt tongues shaped like saddle horns and handcrafted hinges.