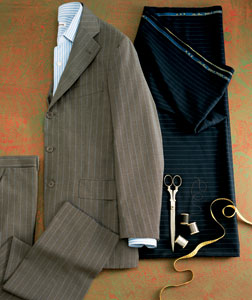 For dressing to the nines, these selections score perfect 10s.

Best bale wools are the grand crus of the fiber world, with length, strength, and fineness that is comparable to vicuña, the world’s softest commercial fiber. Loro Piana has held a virtual monopoly on the cloth since 1997 by continually outbidding its competitors for these record-setting wools from top sheep breeders in Australia and New Zealand. With the precious yarns, the Italian textile mill and clothing-maker weaves enough cloth to produce about 50 custom-made, numbered suits for its most esteemed clients. You have to be on a waiting list to purchase a Record Bale suit, and patience is required: Loro Piana converts the cloth to clothing only after an even finer wool is produced—an accomplishment that can take years.

Newcomer is a bit of a misnomer in the case of Orazio Luciano. The Neapolitan tailor spent 20 years creating handmade clothing for Kiton before venturing out on his own more than a decade ago. After starting small and building a customer base at home and in Japan, he recently introduced his formidable collection of authentic Neapolitan clothing to the United States through a partnership with Artigiano of Coral Gables, Fla. The collection, named La Vera Sartoria Napoletana (the real Neapolitan tailoring), features suits that are handmade right down to the seam between the collar and lapel, a seam usually sewn by machine. Luciano says he also adjusted the traditional Italian slim fit, so, “the man doesn’t feel like he’s wearing his little brother’s suit.”

Every luxury suitmaker has its own take on made-to-measure suits—customized garments constructed from preexisting patterns. According to top retailers, though, Gianluca Isaia stands above its peers for exceptional service and quality. And more important with made-to-measure clothing, it is regarded as the most consistent in terms of detail and fit. Isaia is an innovator that continually develops new jacket silhouettes to accommodate vast variances in the American physique. Exclusivity is another perk: Though it offers dozens of superior fabric variations—from cashmere to Super 210 wool—it cuts only eight suits from each cloth.

Designer labels are generally driven by visionary creative talent and top-notch marketing. But by teaming up in 2002 with SaintAndrews, one of a handful of Italian companies that still produces clothing by hand, Ralph Lauren Purple Label is one of the few collections to factor exceptional quality into the equation. Lauren is also the rare designer who can take pure British style, produce it in Italy, and make it palatable for Americans. Though the suits made for his upscale Purple Label division are sometimes showy and theatrical, this year he has achieved a new level of sophistication by combining classic pin-striped suit jackets, sometimes in linen, with sporty knits, the way real American men dress down. And he infused his three-piece business wear with white-collared, French-cuffed shirts in homage to his favorite sartorial period: the 1930s.

The completely unstructured Travel Jacket and a new higher-stance, two-button blazer with a slight roll to the lapels are among Belvest’s most acclaimed sport coat models. But the 40-year-old, family-owned Italian company’s artistry is apparent in other jacket designs, such as a Picasso-inspired unlined blazer, which is cut like a shirt to wear like a painter’s smock. Another model is a sexy new variation on the four-pocket bush jacket made famous by Ernest Hemingway. Belvest’s modern machinery assures design consistency, while signature details, such as extra-narrow besom pockets for a sleeker look, further exemplify its artisan touch.

In July 2002, vicuña came off the endangered species list after more than three decades, allowing fabrics made from this South American animals’ sumptuous coat to be traded again in the United States. Quick to take advantage of this development, Brioni was among the first to reintroduce to Americans the precious Peruvian cloth, thanks to an exclusive agreement with the Loro Piana textile mill, one of only three companies authorized to weave and distribute it. Brioni’s handmade vicuña topcoats are just one small part of the company’s impressive outerwear collection, which includes cashmere trench coats with detachable beaver collars, leather topcoats with zip-out cashmere linings, and mink-lined cashmere overcoats.

“Three out of every 10 men will be difficult to fit,” says William Fioravanti, who should know. Since 1958, he has been New York City’s most prominent private tailor for affluent gentlemen with less-than-perfect bodies, as well as for those who simply want it done their way. His father, who was also a tailor, gave young William his first thimble at age 9. By the time William was 20, he was under apprenticeship with Ernest A. DeRose, the private tailor to the Rockefeller family. Fioravanti has since made his own mark with superior quality and an unwavering business philosophy: “If a customer brings you a complaint, don’t look for the excuse, look for the trouble.”